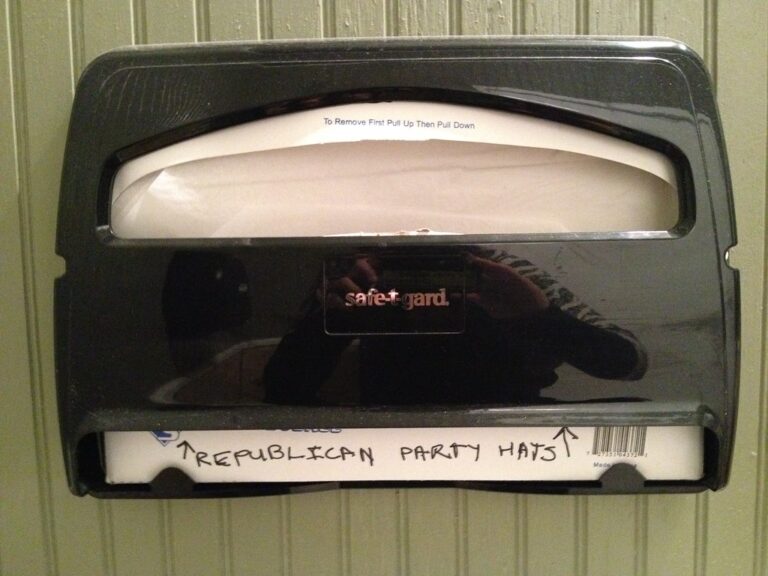 "Republican party hats" by lottebelice is licensed under CC BY-SA 2.0. To view a copy of this license, visit https://creativecommons.org/licenses/by-sa/2.0/?ref=openverse.

When Georgia Congresswoman Marjorie Taylor Green tweeted about defunding the FBI in the wake of the seizing of our property from Donald Trump’s criminal organization Mar-a-Lago headquarters, it got me thinking: How do Republicans, who have indiscriminately defended shitty, racist police no matter what sub-level of murder and maleficence they enact on the citizenry, square this sudden anti-law enforcement rhetoric? The furor in which the Republican Domestic Terrorist Machine has come out vehemently against the nation’s top law enforcement unit doing its job protecting the U.S. against its enemies is plain weird. There is another word for this: hypocrisy.

Everyone has the right to question the motives of the Justice Department, although for decades Republicans defended its worst kind of criminal behavior when they had a Republican in the White House (and bitched against it when they didn’t). Democrats do that, as well. It’s Politics 101. Hypocrisy is built in. This, however, is a different level of hypocrisy. Since the Black Lives Matter movement over the past few years sprouted from protests against police murdering unarmed Black people – some of them in their homes – the knee-jerk, completely asinine All Lives Matter/Blue Flag set have gone above and beyond. It has also been a very effective tool to tie the Defund the Police cries to major Democratic candidates. And yet, now that their beloved orange Al Capone has been caught stealing top secret documents that he claims as his own, the cops are the Gestapo.

It should also be pointed out, because it is glaringly obvious, that Republican Boogie Woman and all-around crap-candidate par excellence, Hillary Clinton’s misuse of top-secret info on unsecure email accounts when she was secretary of state was a main sticking point for Tumpists in 2016, making this whole defense of the same fuck-up spectacularly hypocritical.

Now, I know pointing out this monumental idiocy is like shooting fish in a barrel and doesn’t reflect the usual nuanced arguments of this space, but come on, it is so blatantly insane I had to address it… especially now that all these jabbering cretins waving the sacred Don’t Tread on Me flag while complaining like spoiled brats that they couldn’t be bothered wearing masks to help keep their neighbors safe from a deadly virus, are now perfectly happy with having random state governments controlling the inside of every woman’s body. Of course, the flag does say, Don’t Tread on Me – treading on you if you have a vagina is a-okay, though!

Of course, this is assuming that any of what Republicans have espoused for decades is even real. It’s clearly not. Not one Republican went nuts over the exploding deficit or national debt when George W. Bush put two useless wars on the national credit card or Donald Trump acted like a drunken, rich trophy wife on a binge for four years – two of which with a Republican congress. Nope. This doesn’t matter. Nowadays fiscal responsibly is magically all the rage when a Democrat is in the White House. These are same phonies who defended Bush’s war machine then quickly sided with Trump, who wanted to end NATO, and called Bush a war criminal and Iraq a stupid waste of money. Suddenly the global police force built by their purported god, Ronald Reagan is reduced to isolationism.

However, without a scintilla of doubt, the greatest hypocrisy in the Republican playbook is the constant harping on ‘cancel culture.’ That’s a good one. These are the same morons who spent the 1980s trying to undo the freedoms fought for and won during the progressive 1960s and seventies in civil rights, women’s rights, film, literature, music, drugs, sexuality, and who spent the first years after 9/11 demanding everyone call French Fries Freedom Fries, and who now want to summarily ban books, revise history to keep white people from being upset, and ban pride flags and silence the voice of the LGBT community at school levels everywhere, not to mention suppress the vote and hand the reigns of elections over to anti-American zealots who still claim Trump won in 2020.

Republicans are the No. 1 purveyors of ‘cancel culture.’ They invented it. And while this wimpy, head-in-the-sand political correctness run amok is an anathema to the very concept and construct of the most sacrosanct American values of free speech and expression, the last motherfuckers on planet earth fighting against it should be goddamn Republicans.

My favorite example of the latest “all-up-in-yo-business” from the former “Fuck Your Feelings” Trump cabal is when a good friend of mine (an Independent conservative, who was sick of paying high gas prices) was driving his new electric car and minding his own business (not “treading” on anyone), when some Trump goober asswipe with a giant truck (small pecker substitute) started tailgating him and revving his engine at a stoplight, and then, with his Trump flags flying, yelled “Electric cars suck!” at him. Hmm… that sounds like “treading on” him with some serious “hurt feelings” while infringing on his “personal freedom, man” there. It is remarkable how easy the “don’t lecture me” side is all about lectures.

Don’t be fooled by Republicans. They want to control your lives, your bodies, your language, they are anti-law enforcement, and they do not want you to vote for your candidate only their candidate and they have chosen the cult of a damaged daddy-please-love-me personality over sane governance. They do not stand for anything. It is a house of cards and a sandcastle. None of it is real. It changes with the wind. It is self-aggrandizing bullshit. As stated before here, the Republican Party Republicans is now a domestic terrorist organization that must be stamped out.

James Campion is the Managing Editor of The Reality Check News & Information Desk and the author of “Deep Tank Jersey”, “Fear No Art,” “Trailing Jesus,” “Midnight For Cinderella,” “Y,” “Shout It Out Loud – The Story of KISS’s Destroyer and the Making of an American Icon,” “Accidently Like a Martyr – The Tortured Art of Warren Zevon,” and out now, “Take a Sad Song… The Emotional Currency of “Hey Jude.”