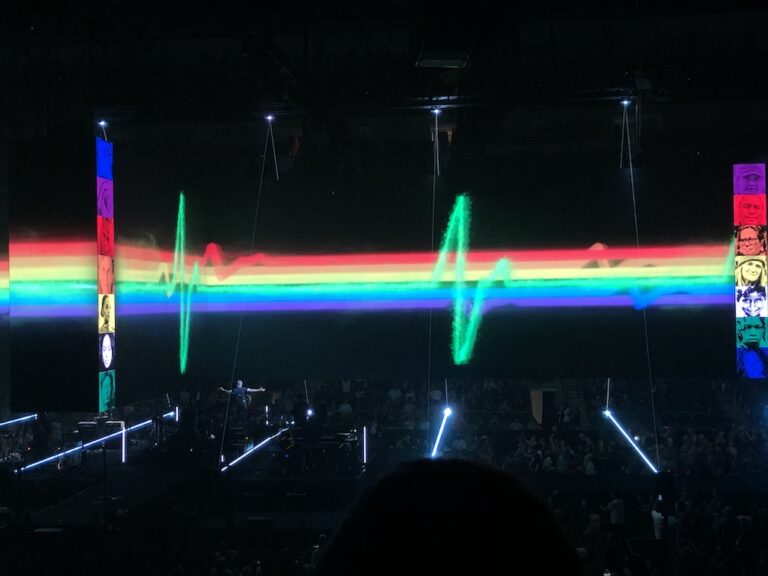 Roger Waters’ This is Not a Drill: The Tour of the Moment

Since 1965, Pink Floyd has been one of the world’s biggest and most important bands. Their seminal eighth studio album Dark Side of the Moon was on the Billboard chart for over 950 weeks, sold more than 45 million copies worldwide, and is one of the most popular albums of all time. Their bassist, Roger Waters, parted ways with the band in 1982, but has embarked on several solo tours including his most poignant to date.

In the arena, tables were topped with literature about the release of Julian Assange, literature about voting rights, and more. One table included newspapers printed by Veterans for Peace, an organization formed by veterans to write journalistic stories about conservation and global politics.

Just before the show began, the lights dimmed and Roger’s voice echoed through the arena with his words mirrored over his cross-shaped video walledstage: “Ladies and gentlemen, please take your seats. The show is about to begin. Before it does, two public announcements. Firstly, out of consideration for your fellow patrons, please turn off your cell phones. And secondly, if you’re one of those ‘I love Pink Floyd, but I can’t stand Roger’s politics’ people, you might do well to fuck off to the bar right now. Thank you and please enjoy the show.” An uproar of cheers ensued.

With that, thunder crashed and lights flashed teal. An eerie video of faceless people in a worn down city played as Roger and the band began a bleak rendition of “Comfortably Numb” from out of sight. The guitar solos were replaced with piano. At the end of this song, a surprise happens before the mood shifts with “The Happiest Days of our Lives” and “Another Brick in the Wall Pts. 2 and 3.” From the start of “The Happiest Days of our Lives,” Roger’s vocality is apparent with dialogue of us and them, good or evil, and who determines that.

Flashes of every former U.S. presidents from Ronald Reagan to present day Joe Biden appear onscreen, with the label “war criminal” and a policy each president enacted. But what was shocking were the cheers from the audience. Should someone shout, “USA! USA!” when Donald Trump is shown onscreen with the text reading, “Even more drone strikes than Obama?” Or, “We love you, Ronnie!,” with a clip of Reagan speaking about the American Miracle?

He then played three solo tracks: “The Powers that Be’,” “The Bravery of Being Out of Range,” and “The Bar.” During “The Powers that Be,” cartoon riot police struck cartoon civilians, with real names, dates, and locations of people that had committed “crimes” such as being mentally ill, peacefully protesting, being poor, or being Black and killed for it. He prefaced “The Bar” as a song he wrote during shutdown as he was watching the Lakota Sioux defend their land at Standing Rock. The last line of the song tells us everything we need to know, “Would you kindly get the fuck off our land?”

Homages to former Pink Floyd visionary Syd Barrett were shown in “Have a Cigar,” “Wish you Were Here,” and the second half of “Shine on You Crazy Diamond” with photos and stories in typeface font. The final track before the intermission was “Sheep” off 1977’s Animals, and Roger expressed his admiration for George Orwell warning us with 1984 and Animal Farm. Swirling sheep, fetuses, guns, and praying mantises circulated the screen as Roger screamed the lengthy screams with aptitude. But it wouldn’t be a true Waters show without an inflatable sheep rising from backstage and floating around the arena bringing us to intermission.

During the intermission, an inflatable pig floated around the arena. On one side, the words “Fuck the Poor” were written and on the other side, “Steal from the Poor and Give to the Rich.” Also marked on the pig were missiles, Bibles, dollar signs, smiley faces, barbed wire, and the Meta symbol around the glowing red eyes.

After a 15 minute intermission, Act II began with a rhythmic chant over the loudspeaker, “Ham-mer. Ham-mer.” Rising in volume until finally blending into “In the Flesh,” the Hammerskins flags from The Wall descended from the rafters. Waters appeared in black leather trench coat with a Hammerskin armband on and black sunglasses. Mimicking the scene from the film where Pink (Bob Geldof) becomes a fascist, Waters calls out various groups in the crowd before grabbing a prop Tommy gun and firing into the crowd.

“Are there any paranoids in the arena tonight?” he asked. We cheered. “This one’s for you. You better run like Hell.” Footage of the marching hammers played on the screens as the band endured a few minor technical difficulties, such as Waters’ microphone.

Before the classic track “Money,” a solo release of his named Is this the Life We Really Want? was played with a montage of ants. He poses the question if we are just workers in a colony, blindly going through motions to survive, and not deviating from what is expected in the life of an ant. “Money” featured footage of dancing pigs in tailored suits pouring champagne, and an excellent saxophone-guitar tradeoff between Blake and Wilson. Wilson and Waters exchanged a hug as “Us and Them” was starting. Following that, “Brain Damage” and “Eclipse” rounded out the latter half of Dark Side of the Moon run. At the transition between “Brain Damage” and “Eclipse,” the Floyd lightshow of legend is sure to drop jaws.

For his encore, Roger and the band played a deeper cut from 1982’s The Final Cut, “Two Suns in the Sunset,” about nuclear fallout. He prefaced it by explaining the invention of the Doomsday Clock; an annual gathering of scientists to discuss how close to “midnight” the earth is. In 2022, we are 90 seconds from midnight, or the end of the world. That is the closest we have ever been to total annihilation. Despite his call for the end of nuclear weapons, people in the crowd booed. The footage showed a cartoon man, driving in the countryside, then disintegrated by a mushroom cloud… people cheered loudly and laughed heartily.

Roger leaves nothing untouched with statements on nuclear proliferation, Black Lives Matter protests, propaganda and fake news, Chelsea Manning and Julian Assange, politicians past and present, critiques against corporations like Coca-Cola, Apple, Meta, Twitter, Standing Rock. The text across the screens included a series about rights – equal, refugee, immigrant, trans, reproductive, Palestinian, Yemeni, indigenous, and ending with human as the font goes from white to blood red. Another series of “Fuck ____” included the Patriachy, occupation, drones, the Supreme Court, and “Your Guns,” followed sharply by, “They’re killing our kids.”

What boggles my mind is the amount of people who bought the ticket and didn’t understand what they were in for. People booed when he said something reasonable, people cheered at a horrible fact steeped in patriotism. Should fans be eager to “be shot” by Roger during “In the Flesh?” This is not news – Pink Floyd’s music has always been political. I mean, the band wrote an album to honor Animal Farm. It’s a shame. It’s as if they heard the music, but did not listen to the messages within. I commend Roger for being as outspoken as he is. The This is Not a Drill Tour is not only a difficult discussion of the times we’re living in, but a necessary one.