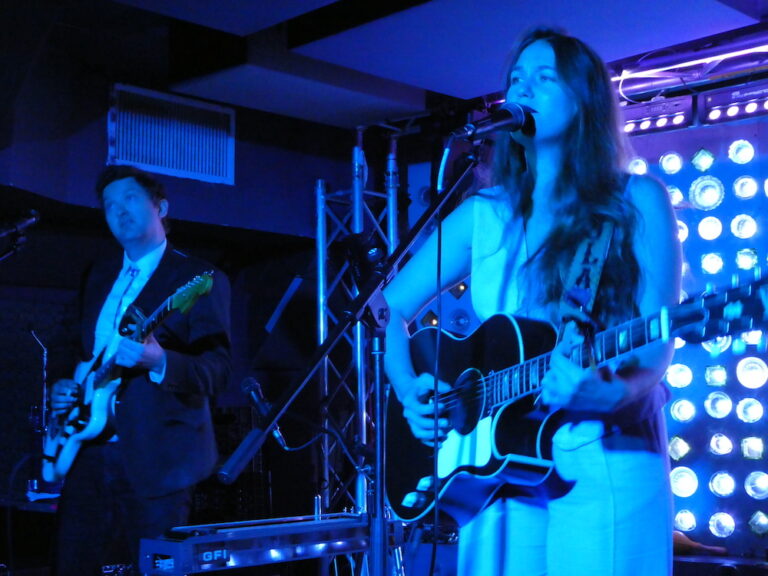 Margaret Glaspy, Charlene Kaye, Katy Kirby, and Lola Kirke co-headlined a benefit concert at Baby’s All Right on August 7 entitled Show Up for the Brigid Alliance! Glaspy, Kirby, and Kaye performed solo sets, and Kirke played with a guitarist. Adi Oasis and Sadie Dupuis (of Speedy Ortiz and Sad13) contributed DJ sets between the live performances. The artists dedicated their musical services for the Brigid Alliance, an organization dedicated to providing financial and logistical support for pregnant women seeking abortions.

Born and raised in California but now living in Brooklyn with her husband, jazz guitarist Julian Lage, Glaspy was perhaps the best known among the performers. Her gentle crooning on some of her more sensitive songs demonstrated that she has subtle jazz inclinations of her own, distinguishing her set uniquely from the other singer-songwriters on the bill. Appropriately for the evening’s cause, she highlighted her recently released song, “My Body, My Choice.”

Kaye originally was billed as “a secret, special guest performance” because she had a live engagement booked nearby two days later. The New York City-based former lead singer of San Fermin started her set accompanying herself with pre-recorded tracks from her most recent album before strapping on a guitar. Her performance was the liveliest of the evening, with many songs marketed for dance and pop audiences.

Kirby came to know secular music after playing in church bands for all of her youth. This late awakening showed in her lyrics, in which she articulated her processing the many complications and twists in coming to a new life in adulthood. She performed solo for most of the set until bringing her girlfriend on stage for a duet.

After years as a professional actor, Kirke has been proving herself on the local music club circuit in recent years. She is the daughter of Simon Kirke, the drummer in Bad Company and Free, and so perhaps was the most rocking performer of the night. Her accompanist enriched Kirke’s songs by adding stinging leads on both lead guitar and pedal steel.

With no bands on stage, the program was a chill evening with four emerging singer-songwriters. Unlike the pressured setting on band tours, the performances were casual and intimate. Each of the artists played for about 40 minutes, sharing stories along with their songs. The uniqueness of the show was how it showcased and valued the talents of four very different women musicians. It was a rare package, perhaps never to be repeated.