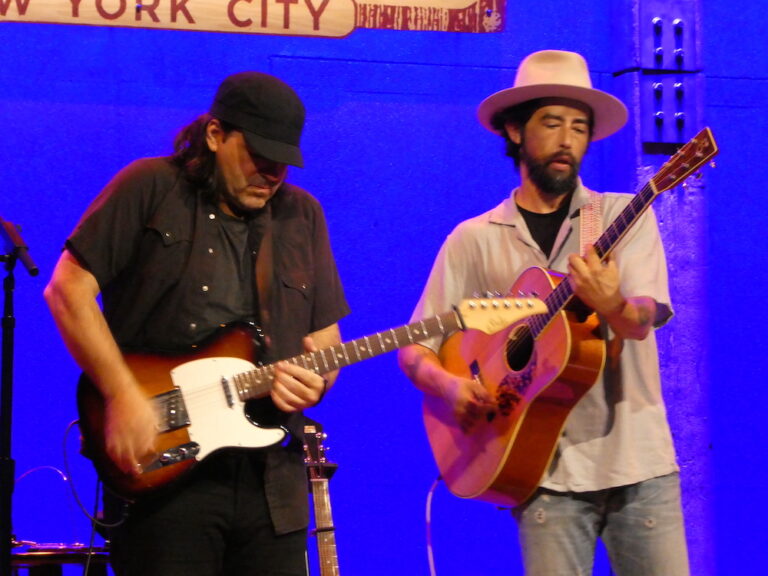 Jackie Greene has been most visible playing in the Black Crowes, Phil Lesh & Friends, Trigger Hippy (where he teamed with Joan Osborne), and WRG (a short-lived acoustic trio in which Greene teamed with Bob Weir of the Grateful Dead and Chris Robinson of the Black Crowes). He also has sat in with the Tedeschi Trucks Band, Gov’t Mule, the North Mississippi All-Stars, Amy Helm, and Steve Earle. Nevertheless, his solo work is his main priority. As a folk, bluegrass and blues-rooted singer songwriter, he has recorded 10 albums of original compositions over the past 20 years.

The two nights of concerts at City Winery NYC were a homecoming of sorts for Greene. He is a California native, yet lived in Brooklyn in recent years. He has since returned to California.

Greene normally performs with a small band. For the current small-venue tour, however, he is playing acoustic guitar and piano and is accompanied solely by Nathan Dale on electric guitar. It is a simpler approach, bringing more attention to his vocal style and lyrics.

Working without a rhythm section, Greene made little attempt to construct a catchy groove. In this stripped-down format, the audience heard his songs as they perhaps were originally composed. Even in this nude format, the songs leaned on a heritage of Americana and roots music. He crooned soulfully over bluesy piano ballads and gave a down-home country flavor to some of the more uptempo songs. Dale’s electric guitar licks charged the songs with clean and soaring leads.

On this night, the set included some of his better-known songs, including “Honey I Been Thinking About You”, “Mexican Girl” and “Hollywood.” Judging by the number of tie-dye t-shirts in the audience, the Deadheads were present, and Greene gave them covers of “Speedway Boogie” and “Sugaree.” Greene did not perform “I Will Never Let You Go,” which earned him an Academy Award when used in the score for the movie Brokeback Mountain. He also did not perform “I Don’t Live in a Dream,” which was featured on episodes of the television series Life and Private Practice.

While not at all delivered as a back-porch experience, the simplicity of the two-musician performance proved to be more intimate than a band concert. With no other distractions, Greene proved that his voice and Dale’s guitar work was enough to propel his songs to impressive heights. It would not be a bad idea to include a similar acoustic mini-set into his band concerts in the future.