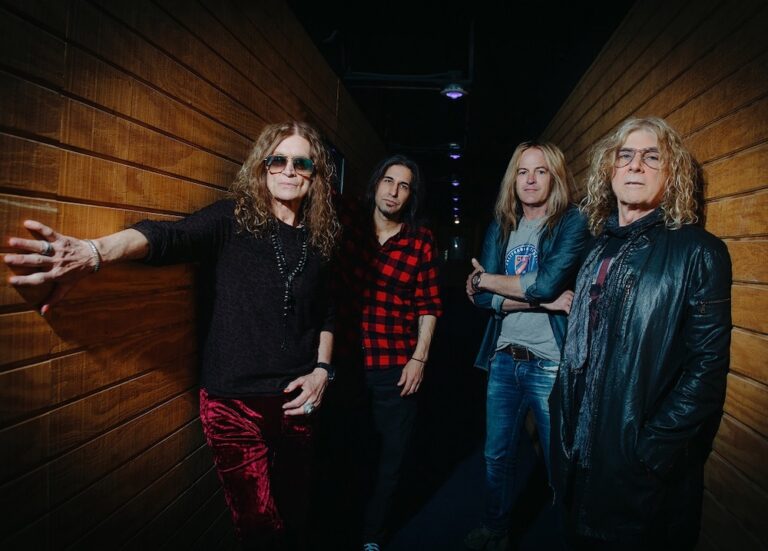 The Dead Daisies – Steadfast In This Moment

Whether you know them as a musical collective or a rock supergroup, The Dead Daisies are a beloved, cinematic, original band who veteran stars alway come out swinging.

The songs are finely crafted yet raucous with mood, tempo changes, and a couple of ballads to provide fans with the full range of the Dead Daisies’ musical repertoire. Defined as a musical collective with rotating members rather than a band, the Dead Daisies’ multiple musicians over its 10-year existence include singer John Corabi (solo, Motley Crue), bassist Marco Mendoza, Guns N’ Roses keyboardist Dizzy Reed, and many more.

The band’s chemistry is evident on tracks like album-opener “Face Your Fear,” replete with Hughes’ punchy bass and soulful vocals. “Hypnotize” and the title track slow down the tempo, making for a slow-grinding, intense experience, while “Shine On” is crisp and insistent. “Courageous” marks one of the disc’s hookier songs, “Not Human” is rabble-rousing fun and “Roll On” is a great ode to rambling.

The Dead Daisies play an intimate, hometown show (Tichy grew up in Morristown, Aldrich is a Philadelphia native) on September 7 at the Landis Theater in Vineland. E’Nuff Z’Nuff opens!

We had the pleasure of speaking with Glenn Hughes and Doug Aldrich.

How is Radiance a step forward from Holy Ground?

Doug: It’s just that we don’t want to repeat ourselves. We want to break some new ground. It could be looked at as an extension of Holy Ground, but, actually, for me, I feel really confident that the songs are equally good if not better on the new album. I’m really excited about it. The other thing is the response to the first two singles that we started playing live, “Radiance” and “Shine On,” has been amazing. To me, it’s a progression in trying to write fresh songs and having a fresh sound and hopefully we did that.

Glenn: For me, I just think that being in the band now awhile, I think with this album we had a lot more fun creating in the control room or in the studio. This album sounds like a cohesive, band effort.

The album comes out almost a month after your show in Vineland. Will you be showcasing Radiance songs?

Doug: We’re playing four new songs, which is like the greatest news for the band and the fans. It’s a whole new set list for the American tour, so what people might have read about online or seen on YouTube, that’s not the set. We’re fine-tuning it.

How do the Dead Daisies go about the songwriting process?

Doug: The recording process was an interesting one, too. Radiance actually started out in 2020. Glenn had some ideas and I came down to him during the pandemic and we worked on those and we had about 10 or 12 songs. Then we put the songs on ice as we promoted the Holy Ground album. We were going to go on tour in Europe this February and that got blown up because of the health stuff, so we decided to go in and make a record.

Radiance has a nice flow, from balls to the wall rockers to mid-tempo tunes and ballads. How would you describe the album’s continuity?

Doug: There’s a lot of light and shade with certain songs. For example, “Hypnotize Yourself.” It’s got the heavy riff but then it breaks down into the verses and the solo, and then one of my favorites is a song called “Roll On” that Glenn brought. It’s just cool. It’s not following a trend. It has got a great sound to it. Then there’s a song that we did at the last minute which was “Courageous.” I wasn’t sure if it was actually going to be on the album or not because it was one of the last things we did and it turned out really nice. Overall, we hope that people enjoy it; that the music helps people get inspired or get through a rough day.

Glenn: What I think about again is being in the moment. This precious, loving time when we’re in this moment. We’re not in the past or in the future. We stay steadfastly in this moment and that’s where the magic happens.

Did you work together before the Dead Daisies? What do you think each other brings to the band?

Glenn: Doug and I have known each other a long time. Doug played in my band in 2015. We did four or five months touring and that was amazing. So when I had the opportunity to do it again, to me to come and work with my dear friend was an opportunity to continue where we started. Doug’s an amazing musician, guitarist and songwriter. For me, [joining the band] was a no brainer.

Glenn, how did you come to join the Dead Daisies?

I got a call from the band’s manager in 2019 to see if I’d like to take in a meeting with David Lowy. I did and David Lowy came to see me play in Michigan in May of 2019. We had a great meeting and I decided I would come to New York to play with Doug and David and Deen Castronovo [the band’s drummer at the time]. It was great… and here I am.

Doug, what has Glenn brought to the band?

Obviously I love what he does musically. He’s such a heavy, melodic bass player, a really melodic singer and lyricist. On the other side – the personal side – Glenn is a really, really spiritually deep individual. When you get to know Glenn he’s very connected to the core, and aside from that, a super kind human being.

What are your plans for 2023? Does the band plan that far ahead?

Glenn: We are thinking about touring. It’s just a matter of where we can go in this very strange time. On the last tour we had some difficulties. Myself, Doug and David all got COVID but we managed to continue.

Doug: We just want to keep promoting this album. We probably will be going to Japan and back to Europe, and South America would be great if we can get down there. We’re definitely looking forward to coming back to New Jersey. I grew up in Philadelphia and Brian is from Morristown, so my family and friends are going to be at that show and it’s the first show of the tour, so we’re super excited to kick it off in New Jersey.

The Dead Daisies concept is that of a musical collective as opposed to a band. What is the difference?

Doug: It’s interesting because it’s kind of like how when Glenn joined Deep Purple they called it MkIII. When Tommy Bolin joined they called it MkIV. This is kind of the same thing with the Dead Daisies. It goes through eras with people and there’s been some really good ones. It’s probably similar to a band except for the fact that there have been changes but the sound remains the same.

Glenn: The songwriting is indeed vital. Everybody’s got their own input on the songs. I’m just happy about what we’ve been doing. It’s so important that we tour for this album and get people to hear it. These songs are strong to play live. The album is very important for rock music.

THE DEAD DAISIES START THEIR TOUR RIGHT HERE IN NEW JERSEY ON SEPTEMBER 7. FOR TICKETS AND DETAILS, CLICK HERE!