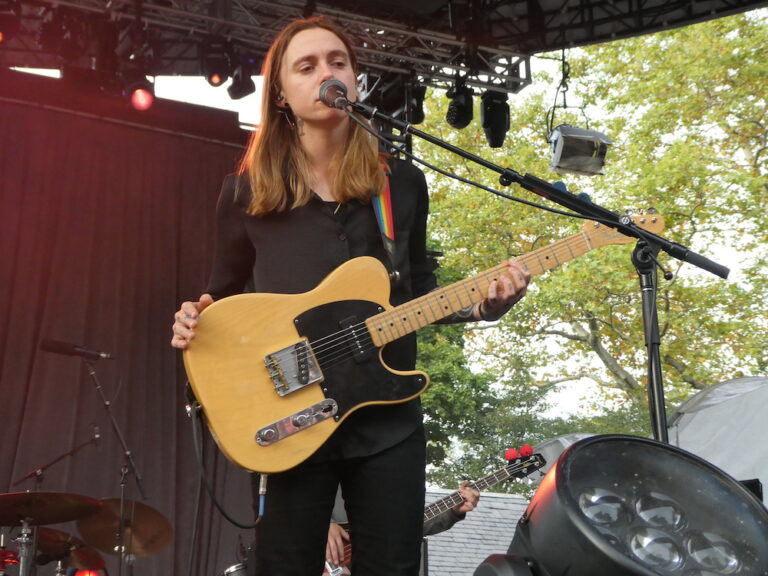 The Wild Heart tour brought together three rising singer-songwriters, Sharon Van Etten, Angel Olsen, and Julien Baker, for a two-month/20-date summer tour which concluded with two nights at SummerStage Central Park. Van Etten and Olsen had a brief history of working together, recording and releasing a joyful song, “Like I Used To,” in 2021. They added Julien Baker to the tour package and named themselves the Wild Hearts. They later added another act to the bill, native Alaskan Quinn Christopherson.

Quinn Christophersen started the evening of music as the audience continually filed past security and situated themselves in the converted play field. He performed his first song solo and then had a guitarist accompany him for the rest of his brief set. He sang pop songs from his forthcoming debut album, his stripped-down acoustic sound acting as a mellow warm-up to the more dynamic sounds that would follow from Baker, Olsen, and Van Etten.

Julien Baker was an instant crowd-pleaser, performing a set largely comprised of songs from her most recent and most commercially successful album, Little Oblivions, released in 2021. Her forte seemed to be the more sparse and melancholy songs, but her sensitive and moody songs sometimes evolved into hard-riffing bangers. Quite animated, she responded to the torpedo-like thrust of her band by shouting, jumping in place, headbanging, and shredding on her guitar at points. She closed with a distortion-filled “Ziptie,” with Olsen, Van Etten, and their musicians and crew members joining Baker and her band onstage.

Like Baker, Angel Olsen’s set concentrated on her most recent output. Six of her eight songs were from her most recent album, 2021’s Big Time. Olsen was in strong voice and ramped up her emerging Americana flair. Her band, which included a cellist and a violinist, often played with a country western twang. Olsen introduced a song by saying that she wrote it last night and believed it was going to be a hit; she and the band then performed her best-known song, “Shut Up, Kiss Me.” She ended her set with the rollicking “All The Good Times,” during which Van Etten, Baker, and their musicians and crew joined Olsen and band on stage.

Sharon Van Etten and Angel Olsen switched closing duties on the two nights in Central Park. Olsen played last on Saturday, and Van Etten on Sunday. At one point, Van Etten, a New Jersey native and former Brooklyn resident, now a Californian, acknowledged how happy she was to end the tour in the city “where it all started” for her.

Van Etten charged into a high-energy rocking set. She began her set by singing newer songs from her sixth and most recent album, We’ve Been Going About This All Wrong, which was released on May 6. Magnetic on stage, she demonstrated the power of her transition from a singer-songwriter to straight-out rocker.

As the show progressed, Van Etten performed familiar songs, including a decidedly uptempo version of “Every Time the Sun Comes Up.” She concluded her main set with the popular “Seventeen.” Returning to the stage for an encore, she sang a solo rendition of “Darkish,” which she explained she wrote during the stillness of the COVID pandemic, a time which led to “reconnecting with what the core really is in our lives.”

Van Etten concluded by inviting Olsen and Baker onstage. As they assumed their positions, Van Etten spoke about how she met Olsen and Baker years ago and wanted to work with them. “These people have become my family,” Van Etten said, knowing that after two months together the love fest was ending and all would go their separate ways. Together, they performed “Like I Used To,” the final song of The Wild Hearts Tour.