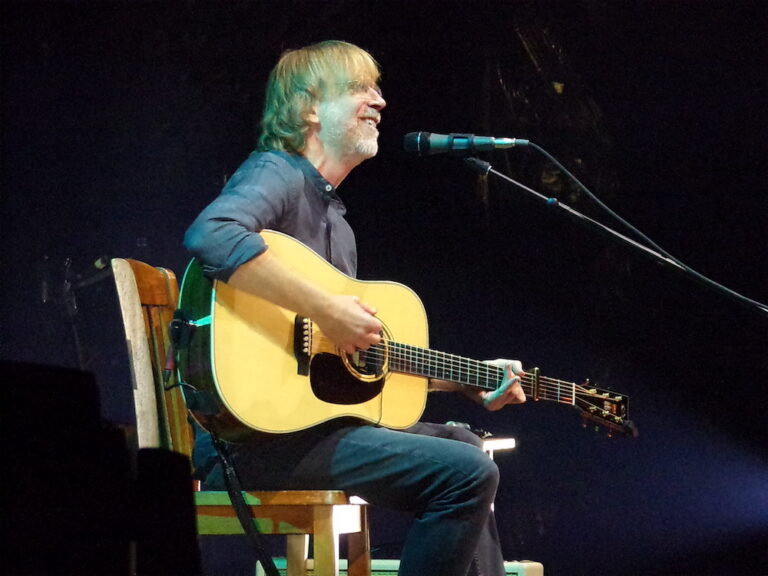 While on a two-week break from Phish’s summer tour of the midwest, guitarist Trey Anastasio staged two solo acoustic concerts at the Beacon Theatre to debut the venue’s Sphere Immersive Sound system. This event further solidified his relationship with his neighborhood concert venue. Previously, he played the venue’s first livestreamed residency during the pandemic in 2020 and headlined the venue’s first full-capacity shows when concert halls reopened to the public in 2021.

On the first of the two nights, the Beacon stage was barren except for a wooden chair, a table, a couple of acoustic guitars, a tray of foot pedals, and a microphone on a stand. Anastasio walked on stage to grand fanfare, and with his first song, “Blaze On,” premiered the theater’s new audio technology. Anastasio used loops to construct a band effect. The power and clarity of the sound system was immediately noted.

“I want to thank everybody at MSG for allowing me to debut the immersive sound system. The funniest thing is that it’s a lot more immersive than standing with my back to the building with no people in it,” he said, referring to the eight livestreamed “Beacon Jams” performances in 2020, during which he played in an otherwise empty theater. “You guys are the ones making it immersive.”

Although this was a solo concert, Anastasio did not necessarily use the evening to promote his first solo album, Mercy, which he released on March 11. Anastasio’s set on this night was comprised almost entirely of Phish songs, with less than a handful of songs from his solo and Trey Anastasio Band albums. Faithful to the jam band tradition, even as a solo performer, Anastasio extended several of the Phish songs with jams, especially “Bathtub Gin,” “Possum,” and “Everything’s Right.”

The informality of the solo set led Anastasio to shar numerous anecdotes between songs. Perhaps the most amusing of the many stories was when he spoke about his visit to the site of the historic Woodstock Music and Arts Festival in 1969, where reportedly a half million people enjoyed three days of live music. Speaking from the perspective of a musician who has played numerous festivals, he claimed that 500,000 people could not have fit in that field. He concluded by suggesting that more people may have attended Phish’s Big Cypress festival in 1999 than the Woodstock festival in 1969.

Among the evening’s curiosities, Anastasio performed “Strange Design,” usually sung by Phish keyboardist Page McConnell. Trey explained that the song had been written exactly 27 years ago to the day, the night before the birth of his first daughter. For this song, Anastasio played a custom-built guitar that McConnell had given him as a birthday gift.

Among the solo compositions, Anastasio performed “A Little More Time” for the first time before an audience. The song is the first track on Mercy. Previously, the song had been performed only once, on a satellite radio broadcast from his apartment.

The sound at the concert was exquisite. Anastasio’s vocals were warm and crisp. His guitar leads on acoustic guitar were of a different style from his electric guitar work in a band context, and yet it brought its own impressive qualities. The sound system captured every shimmer and tone perfectly.

The uniqueness of the Sphere Immersive Sound cannot be understated. Traditionally, sound travels from speakers to audiences in ever-expanding waves. The Sphere Immersive Sound instead uses three-dimensional audio beamforming technology to deliver targeted, crystal-clear and uniform audio to every seat in the theater. Five arrays direct sound to the venue’s four sections – orchestra, loge, lower balcony, and upper balcony – with precision, such that sound levels remain consistent from point of origin to destination. This groundbreaking technology ensures that every audience member experiences the optimal sound mix, regardless of where they are seated. This sound system will remain housed at the Beacon Theatre and will be used at all forthcoming events.