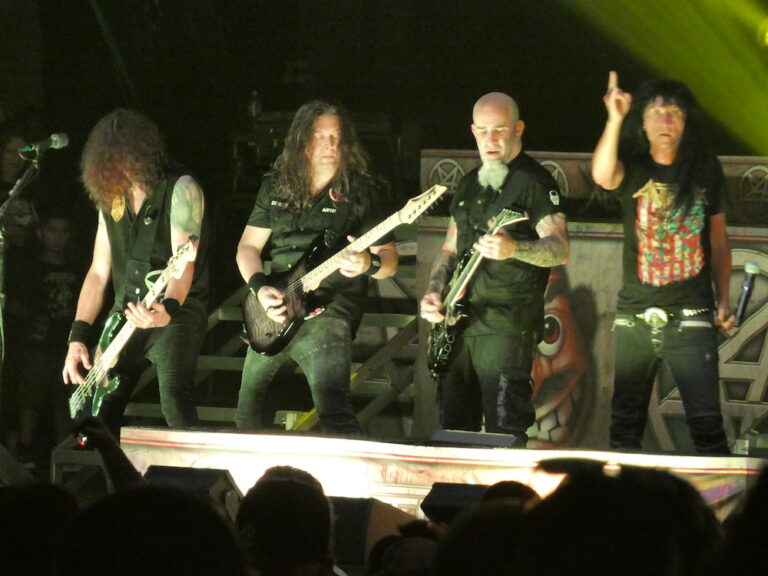 Heavy metal’s home base in New York City has always been in Brooklyn. In the early 1980s, every up and coming metal band, including Anthrax, played at L’Amour in Bay Ridge. Metal now plays regularly at Saint Vitus Bar in Greenpoint and the Meadows and the Brooklyn Monarch in East Williamsburg. In a rare move, metal rumbled to the southernmost part of the borough, Coney Island, just a few yards from rows of roller coasters and aerial rides. Much like the many rides nearby, Anthrax, Black Label Society, and Hatebreed were in the famous amusement park to make people’s head spin.

Support act Hatebreed is not as well known as the other two bands, but has a long history of headlining smaller venues in New York City. Formed in 1994 in nearby Bridgeport, Connecticut, the band is led by Jamey Jasta, a heavy metal celebrity who hosted MTV’s Headbangers Ball from 2003 to 2007, among other highly visible projects. Presently, the band also consists of guitarists Frank Novinec and Wayne Lozinak, bassist Chris Beattie and drummer Matt Byrne. The band’s eighth and most recent album is 2020’s Weight of the False Self.

The audience seemed familiar with Hatebreed as the metalcore band opened the evening with “Proven” from Perseverance, an album now celebrating its 20th anniversary. Playing a fairly lengthy set of 17 songs, the band threw down beefy riffs and brutal breakdowns, with drops as steep at the nearby Cyclone roller coaster. The heaviness of the music generated the first mosh pits and circle pits of the evening. Hatebreed dedicated its performance of “Last Breath” to Black Dahlia Murder vocalist Trevor Strnad, who died on May 11. Getting strong response throughout the show, Hatebreed concluded with another song from Perseverance, “I Will Be Heard.”

While Anthrax and Black Metal Society have crossed paths and shared festival stages for decades, this was their first co-headlining tour. Judging by the t-shirts worn in the audience, more fans may have come to see Black Label Society than the other two bands. As the lights dimmed, the audience heard a recording of “Whole Lotta Sabbath” until the stage curtain fell and the now-visible band launched into “Funeral Bell.” Standing before a microphone stand decorated with miniature skulls and wearing a black leather vest and red plaid kilt, vocalist Zakk Wylde commanded center stage, wildly whipping his long blond mane as he played dazzling leads on his guitar. Co-guitarist Dario Lorina, bassist John DeServio and drummer Jeff Fabb more than ably supported these guitar excursions. The band introduced songs from its 11th and most recent studio album, 2021’s Doom Crew Inc., interspersed with older songs.

Although Wylde is originally from New Jersey, he sang with a southern-like drawl that made many of his lyrics undecipherable. It hardly mattered. Since forming in 1998 in Los Angeles, California,  the band has pivoted on classic, hard rocking guitar riffs and massively extended guitar leads. Wylde and Lorina traded and doubled leads several times, most notably in “Fire It Up,” when Wylde stood on his piano and Lorina stood on a riser center stage as they volleyed dueling leads. As unusual, Wylde switched to piano for the sentimental “In This River,” which on this night was accompanied by a slide show of the late brothers in Pantera,  “Dimebag” Darrell and Vinnie Paul Abbott. The set ended with two staples from the band’s live shows, “Suicide Messiah” and “Stillborn.”

As intermission closed and the venue lights dimmed, large LED screens lit with a video testimonial in which dozens of celebrity musicians, actors and comedians briefly spoke the praises of Anthrax. The speakers congratulated the band on its 40th anniversary, which occurred in 2021. Many speakers acknowledged that Anthrax was one of the pioneers in speed and thrash metal and remains a valid force in metal music. Anthrax presently consists of vocalist Joey Belladonna, guitarists Scott Ian and newest member Jonathan Donias, bassist Frank Bello, and drummer Charlie Benante.

Anthrax’s 40th anniversary tour, delayed one year due to COVID, was a rallying career retrospective rather than a promotion of a single album. Anthrax is overdue for a new album, however; its 11th and most recent album. For All Kings, dates back to 2016. The set began and ended with songs from Among the Living, the title track as the opener and “Indians” as the closer, with songs from other albums in between. The set’s biggest surprise was when Chuck D of Public Enemy strolled onto the stage to reprise the collaborative version of his song, 1991’s “Bring the Noise.” Belladonna was in fine voice after a slightly rough start, and the band thrashed energetically without ever diminishing its walloping impact. Guitars wailed and the rhythm section hit like thunder. Ironically, however, while Anthrax’s thrash metal seemed so very radical in the 1980s, in the 21st century it lost its cutting edge and now sounded closer to commercial arena rock.