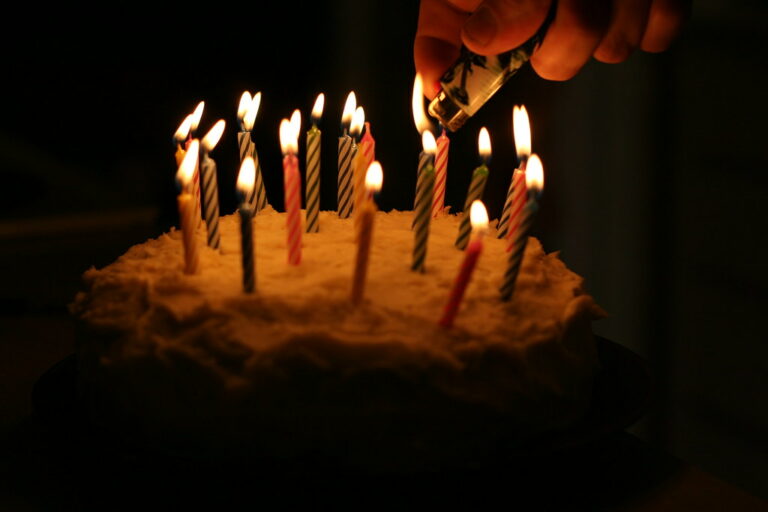 "raul's birthday cake" by lokate366 is licensed under CC BY-SA 2.0. To view a copy of this license, visit https://creativecommons.org/licenses/by-sa/2.0/?ref=openverse.

How age happens to the worst of us…

The day I am writing this, which also happens to be the day it goes to press, I will turn 60. That is six decades on this planet, which seems simultaneously to be perfectly acceptable to the time/space continuum and yet freakishly bizarre in the same framework. Like most of life, it’s all occurred incredibly fast and painfully slow at the same time. What I wrote in this space 20 years ago on the eve of turning 40, still stands. I have always seen the whole thing as if living several lives, not just one. None of us remain unchanged, unevolved, even though most of us fight like hell to avoid it. Then I went and had a daughter, who has been a whole bunch of people in just 14 years, never mind 60. She obliterated any quaint illusions of stasis for the purposes of slowing down time, subjectively explaining my own plight while objectively reviewing another with the same DNA.

Wait, what was my point?

Oh, right, in 2002 I pondered, “Aging, or should I say, experiencing life, is an odd process, seeing how most of what you really know is what is right in front of you and most of what you’ve already accumulated in the way of knowledge is ghostly, like a dream of some kind. And by the time you reference this crap it’s so completely meaningless in the realm of your current reality, you seem like a doddering factfinder trying to impress the congregation.”

But then a few weeks ago I surmised about how cool it was that Paul McCartney has lived to the ripe young age of 80, despite, you know, the drugs and the rock star stuff – especially in the wake of two of the other four Beatles having died young, or younger. I believe that, too, because I having survived long enough to gather information and experience and having the honor to watch nieces and nephews and your daughter grow up and your dearest friends and family age long enough to bitch about the same stuff and get excited by the other stuff is very cool.

Am I saying here that I prefer to be alive at 60 than dead?

Yes, I am saying that… and more.

Then, yesterday, Queen Elizabeth II died. She’d been queen longer than I’ve been around. Damn. That is titanic perspective right there on the primacy of hanging in. Good for her.

Having a bit of road behind you is a boon in England, but aging is something we do not prize in the U.S. There are billions of dollars spent in this country to retard the aging process or make us forget about it or to try and stay “relevant” or “hip” or at be least aware of things around us that people much younger than us in ages we used to be comprehend. I am lucky to have worked covering pop culture and specifically music these past 30 or so years, and 25 of them at The Aquarian. Because this paper is both history (we’re in the R&R Hall of Fame archives, bitches) and current events, I’ve enjoyed penning this column. It has kept me engaged in some strange and dangerous places and I am better for it. I have been afforded the ability to write books on history and current events in music as well, and let’s face it, it is an advantage to be alive to do it. I have always been proud to be a post-Boomer writer. I like that I straddle the demon line between Boomer and X and know enough to opine on you Y and Z fuckers and millennials and now with this daughter of mine, whatever crazy crap you kids are cooking up.

Hey, we’re all getting older, and for each of us it all comes down to perspective. When I was 40, I did not feel old or out of touch at all. In fact, it was the first time in my hell-bent life that I felt like a functioning human being, which I did not entertain in my 30s. Hell, my 20s were a blur, so let’s not belabor that nonsense. But after 40, and after 50 for that matter, I could see the finish line, making me less inclined to waste time and procrastinate on the things that make me happy personally, professionally and creatively. Getting to six-oh means I am getting closer to 25 years married to the best person I know, but I will keep her out of this, because she is much younger than me and keeps reminding me of it (and should). But just having all those years behind us and the memories and the trust and the fortitude we built can only be achieved through the years. There is no substitute for time. You can’t cheat it or it cheats you. And I must say having lived, and having lived with her, has taught me that it’s good to be above ground and falling apart and turning a deep, dark crimson inside.

There was a time when I would mark my writing life and its remaining time by Hunter S. Thompson, who did all he could to end his life about 50 times in his 60+ years among us. Then Hunter said, “Fuck it, I’m done” in 2005 and put a bullet in his head. That bummed me out for so many reasons, but the crucial one is that the “Let’s see how long Hunter can keep this up?” measure clock stopped. In his suicide note he remarked, “It is 17 years past 50. 17 more than I needed or wanted. Boring.”

Hunter wasn’t wrong about much, but he was way off on that one. Or at least he was way off for me. I’ll keep this going as long as I can love and be loved, question and be questioned, write and read and listen to the blessed glorious sounds coming from my turntable. Watch baseball. Smoke cigars. Drink gin. Watch sun sets. Eat apples. Fuck. Fight. Have black cats. Be the guy who was born the same year as the Rolling Stones and Spider-Man and miss the things and the people who could not for one reason or another continue to move along with me. But I remember them fondly. It’s what you do with time.

James Campion is the Managing Editor of The Reality Check News & Information Desk and the author of “Deep Tank Jersey,” “Fear No Art,” “Trailing Jesus,” “Midnight For Cinderella,” “Y”. “Shout It Out Loud – The Story of KISS’s Destroyer and the Making of an American Icon,” “Accidently Like a Martyr – The Tortured Art of Warren Zevon,” and most recently, “Take a Sad Song… The Emotional Currency of “Hey Jude”.”