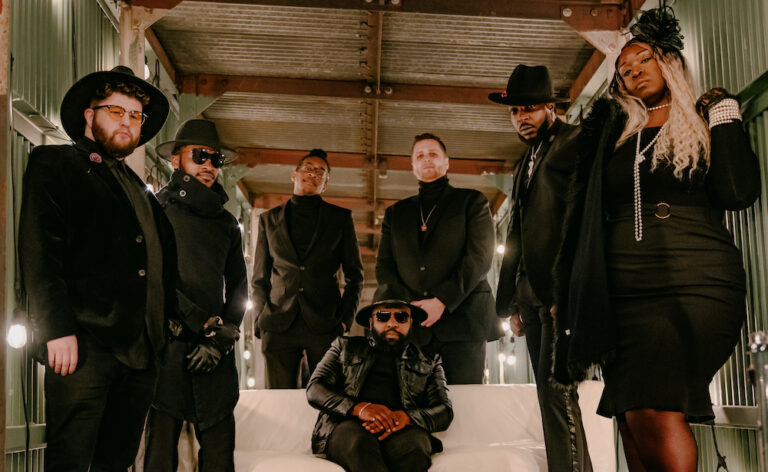 Makin Waves with Alexander Simone & the Whodat? Live Crew: “Wherever the Vibes Are Needed”

Soulful singer-songwriter Alexander Simone has been laying down good vibes within the Asbury Park music scene with this delicious band, the Whodat? Live Crew, for a decade. The fruits of their hard work are paying off with such hot singles as the gospel-edged “Even Now” and the forthcoming danceable follow-up, “Long Way to Go,” both on the loving Asbury-based label Telegraph Hill Records.

For the second consecutive year, Alexander & Whodat? have been tapped to play the city-wide Asbury takeover of the Sea.Hear.Now Festival. Last year, they played the main stage opening for Pearl Jam. This year, they’re playing an after party on September 18 at Asbury Lanes with Kuf Knotz & Christine, Elise, Joe P., and Will Dailey and Friends. They also will perform September 30 in Thompson Park in Lincroft with Asbury bluesman James Dalton and in November at the Wonder Bar in Asbury at a benefit for three worthwhile organizations: Bruce Springsteen Archives & Center for American Music, which aims to open a museum in the Boss’ hometown of Freehold; Asbury Park African-American Music Project, which preserves the past, promotes the present, and protects the future of the city’s historic West Side, and Rick Makin Memorial Scholarship at Monmouth University in honor of my late father, a 38-year Asbury Park Press newsman and its features editor from 1972 to 1980 assigning many stories about the rise of Asbury as a nationally recognized music scene. That soon-to-be-announced show also will feature Joe D’Urso & Stone Caravan, Jarod Clemons and the Late Nights, singer-songwriter Stella Mrowicki, DJ Lee Mrowicki, and an Asbury Park Music History Panel moderated by Eileen Chapman, director of the Springsteen Archives.

With music royalty in his blood from his legendary grandmother Nina Simone, the ever-charitable Alexander knows his journey is a bright path that will continue to shed good vibes wherever he goes. In the following chat, we discussed that process, as well as his lineage and his close relationships with his band, Telegraph Hill, and the City by the Sea he calls home.

Were you close with your grandmother Nina Simone?

No, we wasn’t very close. Those were my younger years, and I was separated from my mother at a young age, so I didn’t get aquatinted with that side of the family until later on in my journey.

How and why is your music influenced by your grandmother?

It’s influenced heavy because I am Nina Simone. That’s my bloodline, that’s where I come from. Her journey is the blueprint to my story. She laid the foundation, set the path, and her influence was strong on not just me but the world, so when I make music, I make sure I make music that relates to the times, and I make sure it’s sumn the people can feel. That’s what she believed in doin’, and that’s what she represented. So, I smile in knowing she’s looking down smiling at me as I go forth in my journey.

How did you gravitate to Asbury Park?

I wouldn’t say my family gravitated to Asbury. That was all me [Laugh]. Asbury has always been known for its underground music scene from different venues to legends whose careers were birthed here! So, I felt it was the perfect fit at this moment in my musical journey. Not to mention, I supply a need that this area lacks: ‘soul!’ And that’s what I’ve been doin’: bringing the Soul to the Shore!

Did you grow up in Asbury Park? If not, where?

Nah, as a youngin’, I was raised between Philly and Trenton up until my great-grandmother got sick, and my grandmother moved to Lakewood to take care of her. I was everywhere growing up, but Lakewood became home at one point.

How has Asbury Park influenced your music?

I wouldn’t say Asbury influenced my music, but I would say knowing the legends whose careers were birthed here gives me the DRIVE and continuity to bless every stage, every venue with these vibes because soon they gonna touch the world.

You are playing a charity event on November 19 at the Wonder Bar that in part will benefit Asbury Park African-American Music Project, whom you’ve played for before. Why is that organization important to you?

It’s important because it’s a great cause, and I can see what the future holds for them, and I wanna be a part of that future: Bringing awareness to the African-American music scene of old and new, preserving the culture, the history; not to mention, I’m now a part of that history.

I’ve seen you play for a variety of charities. Why is it important to you to give back to the community?

It’s important to give back! You give, and you will receive, good karma. I’m a man of the people, strong on integrity, so I try my best to show that in action.

Who is in your band and what does each member bring that wouldn’t be there without them?

Man, I literally have a league of extraordinary musicians, singers, masterminds that I’ve had the pleasure to build and grow with over the years. My singers, Bryen Reeves and Kindra Graham. Bryen brings a sense of style to the band. Not only are his vocals blazing, but his arrangements blended with the vocal range of Kindra and myself leads to soulful harmonies that touch the soul. Kindra represents for our ladies. She brings style and grace to our band, keeps us on our feet when things ain’t right sound wise or band wise. She gonna let you know we can be much better. They used to be a part of a highly sought-after gospel group back in the day called ANC. I’m blessed to have ’em with me now goin’ on 10-plus years.

Jules Drucker, my lead guitar player – a Berklee graduate – is a virtuoso on the guitar and provides tones and rhythmic sounds on a guitar that you can only dream of hearing! He plays a major part in the creativity of things! And he’s a master at what he does.

Kevin Stryker, my bass player, one of the most humbling masters I know! Stryker keeps us on the grid not only holding down the bottom, but if we doin’ a cover, original, Stryker wants to make sure it’s all charted and executed as such. You tell him to learn a groove, he’s on it!

Timothy McClain, our young prodigy on keys, he’s literally a sponge. You do it around Tim, he’s gone learn it. He plays every instrument, and he keeps us young and fresh.

Andrew Davis on drums! He keeps us tight like no other! He keeps us locked in. He’s brought our sound to another level with his producer mindset, and it comes across in his playing. Accurate precision and unmatched professionalism.

Is Whodat? a reference to New Orleans?

Totally has nothing to do with us (laughs). Whodat? comes from the surprise and feeling people have when they hear us play. From solos to harmonies, from breaks to transitions, when you first hear the band ever, you’re like, ‘Who’s that?’

I think “Even Now” is one of the best Jersey songs of the year. What inspired it, how, and why?

I appreciate that. I wanted to create sumn to encourage not only the people but myself at an uncomfortable time. We were goin’ through a pandemic, life struggles, you name it. So I just wanted to make sumn the people can feel and let them know in spite of what we goin’ through, we not alone ‘even now’ in this chaotic time. God is with us.

What have you liked most about working with Telegraph Hill Records and why?

Man, Telegraph Hill, that’s family! They cater to our sound and vision, and they help us execute that from visuals to audio! After working with these guys on and off the stage for the past two years, it’s definitely embedded in the vibe! They not just a label but good people! Joe Pom, head engineer, believe it or not is a genius in his own right. His ear for things that the average person wouldn’t hear definitely helps a lot when it comes down to the recording process. Not to mention, his patience and respect for the artist he works with is second to none!

Will you continue to work with Telegraph Hill for future release?

Of course, most definitely! We working on a few things now set to release real soon! We’ve been locked in the studio the past two years perfecting vibes so it’s only right we unleash ’em.

When will your next recording come out, and can you share any production and songwriting details about it?

Next single should drop right along the time we do Sea.Hear.Now After Party! That day, we releasing a fun crowd favorite dance track entitled ‘Long Way to Go’. Not only is this sure to get your feet moving, but along with its energetic drive and positive lyrics, it’s sure to make you feel good! After coming off of our last single, ‘Even Now,’ this is the perfect follow-up! We gotta long way to go so let’s just keep moving.

This song is sure to brighten up your mood, and if the song doesn’t, the music video will! We had so much fun shooting it with All Love Productions and Telegraph Hill! Also look for another Vibes compilation project to follow up to the EP most likely by end of the year, as well as a few more solo singles from myself. We really about to flood y’all with vibes!

You will be playing a Sea.Hear.Now After Party on September 18 at Asbury Lanes. How’s it feel to be picked among so many Asbury bands to have that gig?

It feels good to be acknowledged for the work and grind that we have been putting in! Whodat? works hard. ‘We working’ so it’s good to know it’s not goin’ unnoticed! But it’s that Main Stage we aiming for! After being on that stage with Pearl Jam last year, I got a taste of another world, the future. It’s levels, and I appreciate the process

When and where else will you be performing?

I’ll be performing all over! Wherever the vibes are needed, I’ll be present! Just stay locked into the socials to know where to pull up at.