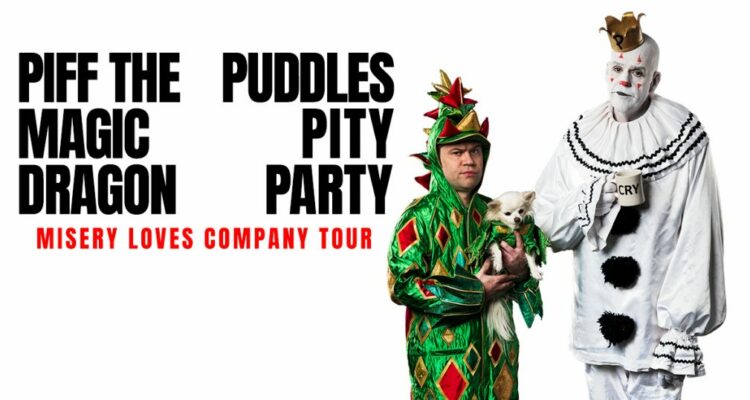 Coming to Count Basie This WeekEnd: Piff the Magic Dragon… & A Tiny Dog

Piff: “I mean that’s the great thing about life – you never know what’s gonna come around the corner next. I never thought I’d be headlining my own show in Las Vegas and touring the country with a six-and-a-half foot singing clown.”

The Aquarian: “And a tiny dog.”

If you love comedy, magic, music, art, or dogs, this show at Count Basie Center for the Arts on October 2 is for you… and for everyone, pretty much. As our conversation with headliner and all-around-superb-and-funny-human-dragon-man shows, there is something for every person who attends this variety show while on the road. Fans new, old, from Vegas explorations, or America’s Got Talent viewing are finding this night to be fulfilling and raucous and insane and silly and straight up magical. (None of which surprises us, longtime fans of the funny-human-dragon-man.)

Reptile Dysfunction, your show available now on YouTube, is everything. For those who have yet to tune into this truly multifaceted special, can you sum it up in a sentence or two and really wet the appetite of our readers, magic lovers, comedy fans, and all the above?

Sure. It’s the life of a magic dragon in Las Vegas with a tiny dog and a mind-blowing show

[Laughs] Yes, and for everyone who doesn’t know – but should know – Mr. Piffles is this adorable little chihuahua, but equally as notable at this point as you, Piff the Magic Dragon. At what point did you think of or want to incorporate him or a dog at all into your act and overarching brand?

Well, back in the day I was doing shows on my own and I was like, “You know what? This thing needs a gimmick.” I put a chihuahua in the show, who was owned by the girl who was running the venue, and it was such a big hit. The next day I went out and found Mr. Piffles and we’ve been together ever since.

That’s amazing. It feels so seamless and natural and silly – in the most wonderful, magical way.

Yeah. Having a tiny dog is magical.

To kind of round out this little family of magical dragons, we have now been introduced to Pop the Magic Dragon who is Penn Jillette, a superstar in his own realm and in his own right. A friend of yours, a mentor of yours, who just so happens to be your magical reptilian father.

Yes, my father that comes back to visit is Pop the Magic Dragon.

I think that is genius. We have Mr. Piffles, we’ve got Piff, you, and we have Pop. Who do you think would be a good choice for a magical reptilian mother, the grandmother of Mr. Piffles, if you will?

Well, who knows – it doesn’t have to be reptilian. Ah, because I’ve watched enough Game of Thrones, I would think Emilia Clark can get the job.

She’s great and also has a lot of talent under her belt. Luckily you’re bringing said talent of yours to New Jersey, which is where we are based out of, for a show at Count Basie Center for the Arts. I’m curious as both a fan and journalist what you think of New Jersey audiences, because I know comedy is subjective and magic can be, as well. Do you find that certain places on tours resonate with your act more than others? And where does New Jersey fall in line with that?

We’ve always had a great time in New Jersey – lots of laughs. We played in New Brunswick a couple of times and we’ve always been very warmly received.

Similarly, thinking about touring, we talked to a lot of musicians and entertainers. Can you compare at all being on tour and the audiences abroad to that of being a staple in Las Vegas and the types of crowds drawn there? Because they really are their own entity.

Yeah, so Vegas people come from all over the world to this same place. You are dealing with a multitude of different people [at once], whereas on tour, everyone’s from that same city so the audience has a bit more camaraderie with each other and us. And, as a result, they’re usually a little more vocal and a lot of fun.

I love that. We know that you’ve also played alongside some just as intriguing and top notch acts. We have Puddles Pity Party now, and this is – as you guys have pretty much called it – as show of AGT losers and their subsequent misery. I think you’re clearly winning and far from actually miserable in this Misery Loves Company tour. It’s such a hit. Why do you think the combination of you and Mr. Piffles Puddles make so much nonsensical sense?

That’s true – this does make it a little bit more of a variety show and it appeases many.

I know it is gonna be a ton of fun. Speaking of fun, you haven’t been doing this for a little bit – you’ve been at this for quite a long time. You have immense talent and stage presence, but given the last two or three years, how does it feel like to play in front of people versus having a magic special online or are doing comedy things over the internet? Do you find that connecting with people in real life is just more your speed because you can feed off that energy?

Yeah, I think performing live is always my favorite thing to do. You know, we were actually the first show back from the pandemic in Vegas and the first to be back on the Strip. It’s been great to be able to get back and see people while we’re doing the show and then meet them afterwards and say hi. At heart, that’s me – I’m a live performer.

FOR TICKETS TO SEE PIFF THE MAGIC DRAGON AND PUDDLES PITY PARTY, CLICK HERE! TOUR DATES AND INFORMATION ARE THERE FOR YOU!