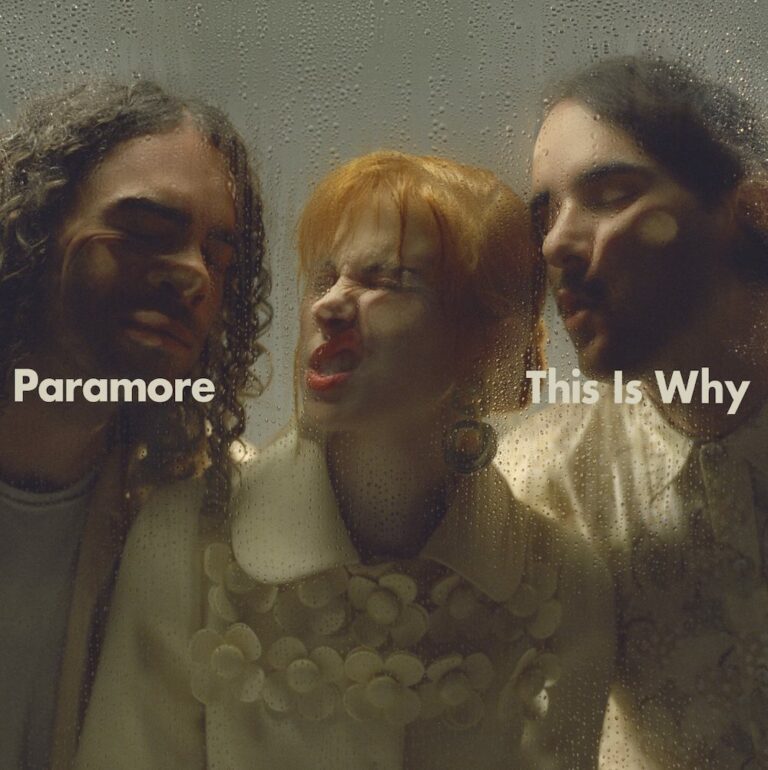 “This Is Why,” the new single from Paramore, sounds like the best of their last LP, After Laughter, was thrown into a blender with mid-to-late-sixties era Beatles, mixed up right alongside the visual art rockers of the world (David Bowie and The Strokes come to mind), and topped with the production qualities and colorful eccentricities of someone like Soko – even Charli XCX. There are levels to this hit – which we feel strongly in calling it, knowing full well that it’s about to skyrocket much like “Hard Times” or “Still Into You.”

At first glance this brand new, returning single is what you would expect from Paramore coming off of After Laughter; inklings of new wave wrapped up neatly with an edgy pop bow. This is far from the reality of this song and the journey to get here. It’s not neat, nor pretty, just realistic and vibe-y with undertones of hope.

Not only did frontwoman of the trio, Hayley Williams, admit in a press release to this track being the last one written for their forthcoming record (done reluctantly, at that), but she embarked on a variety of endeavors on her own accord between albums. Her wildly successful hair company, Good Dye Young, is ahead of the curve in terms of heath, sustainability, ease, and brightness (makes sense with her signature orange locks). Then you have Petals for Armor, an album that topped our ‘25 Best Albums of the Year‘ ranking in 2020 and was one of the most riveting, vulnerable pieces of art released that year – even potentially of the 2020s thus far – and had a solo Hayley at the helm. Throw in the world’s experiences of socio-political unrest, an ongoing pandemic, and an impressive string of human rights issues (particularly against women), and you’ve got enough tension to span said globe five times over. We’re all on another level, for better or for worse, and we can understand why the band doesn’t “leave the house.” Clearly, though, the three-piece that make up the punk rock outfit turned alt pop megastars had a lot to think about and even more work with over these five-and-a-half years. The outcome? This Is Why, the album and its subsequent title track which is, as mentioned, sure to be hit single.

We can only describe this characteristically raw song about hard truths, reality, perseverance, and independence as wholeheartedly Paramore in 2022. “This Is Why” is the natural, real-world progression of this band – and it takes following their career, sound, style, and journey on this earth to recognize that and appreciate the musicianship, lyricism, and production of it. There is no stark transformation here – it’s all organic, hard-hitting, and relevant. Everyone who listens to this song, and especially those who play it on repeat, will find a part of themselves in it and will be connecting the dots between personal choices worth standing up for and the urgent pressures other people, things, or events place on them in those moments.

In signature Hayley Williams fashion, the singer-songwriter-entrepreneur-activist let’s her vocal inflections do much of the work meaning and message wise. Her range is immense and she herself is fearless, which is a lethal, albeit memorable, combination. However, the band is a dream team and knows how to play off one another so that their joint musicianship shines just as brightly. Proof: the upbeat out-of-the-gate introduction to the brand new track. You have twinkly yet jangly electric guitars skirting over puffy, cymbal-filled drums fills prior to ever-so-slightly distorted vocals dropping in some 30 seconds int it. Everything builds into something more with these three – always.

Taylor York and Zac Farro are the epitome of Nashville musicians, even if not native to Music City. Their back-and-forth is forever notable, making riffs and cycles of beats worthy of dance clubs and live shows. And yet it is also those flashes of eye-catching and harmonious give-and-takes between those two that allow for the various guitar work, synths, and drums to bounce around as individual, monumental entities – never envious of the instrument inherent in Williams. Again, we must say, if you’re from the Riot! age of Paramore, After Laughter, or otherwise, you can feel how these three creatives work together and you can hear it in the instrumental and vocal layers that make up “This Is Why,” and what is sure to be the subsequent studio album (out February 10).