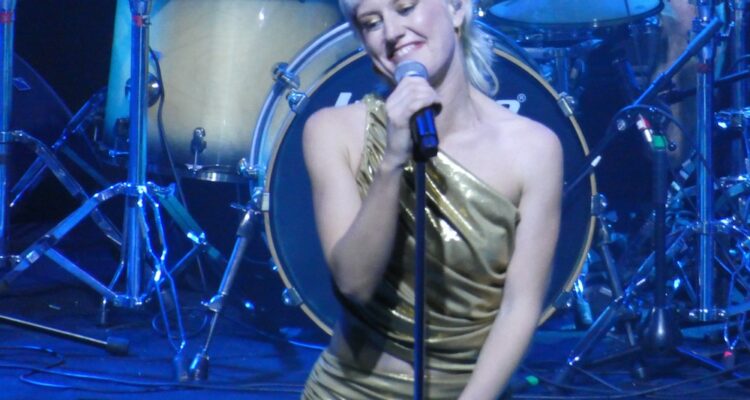 Amyl and the Sniffers is an Australian punk rock quartet on a meteoric rise on just two albums and two EPs. Earlier this year, the band was scheduled to headline the 600-capacity Music Hall of Williamsburg; that show was canceled due to an increase in local COVID infections. In May, the band headlined at the 1,800-capacity Brooklyn Steel instead. Now, a mere four months later, basically on the same tour, the band headlined the 3,000-capacity Terminal 5. Punk rock is not dead.

Amyl and the Sniffers formed in 2016 in Melbourne, Australia. The band caught on early in its homeland. The band’s self-titled debut album won the 2019 Best Rock Album category at Australia’s ARIA Music Awards. The band’s second and most recent album, Comfort to Me, largely written during the 2019-2020 Australian brushfires and the pandemic lockdowns, was released on September 20, 2021. Although the album is already a year old, it continues taking the band to rock stages around the globe.

The central figure in Amyl and the Sniffers is 26-year-old lead singer Amy Taylor. Off-stage, she quietly keeps her personal life out of the public eye; on stage, she is an outlandish dynamo. Dressed in scanty outfits, she is a tornado, spinning around the stage, jumping to the rhythms, and keeping the audience visually enraptured. She also excites the audience with her punchy vocal delivery, which is more talking and shouting rather than traditional singing.

At Terminal 5, Taylor’s onstage dynamics overshadowed Dec Martens, who shredded impressively and continuously on his guitar, both on extended leads and riffs. Bassist Fergus Romer kept his back to the audience for most of the performance; will someone please tell him this is disrespectful to his audience? Drummer Bryce Wilson ably powered the rapid rhythms of the band’s mostly-fast songs.

The band’s 18-song setlist at Terminal 5 was much like the repertoire at Brooklyn Steel. Amyl and the Sniffers performed 10 of the 13 songs from the band’s 2021 album, Comfort to Me, interspersed with older songs. The band played all originals, no covers.

Amyl and the Sniffers opened with “Control” from the 2019 self-titled album and, in a matter of two or three minutes, waves of audience members began to crowd surf. Taylor seemed to offer approval, often high-fiving the crowd surfers landing in the pit. Late in the show, she herself descended into the pit to sing in the faces of the fans against the barrier.

Midway through the show, Taylor dedicated the song “Knifey” to the members of the audience who identified as LGBTQIA, even though the lyrics were violent and had nothing to do with gender identity. Drawing the show to a close, Taylor snarled “Some Mutts (Can’t Be Muzzled),” a song which, like most of the band’s catalog, was riddled with punk attitude. “You got a new dog, do you remember me?/She walks around on my old lead/You got a new dog, do you remember me?/Am I just a memory?” The show closed with “Hertz,” a singular track that more directly hinted of vulnerability. “I want you to love me/Do you love me?” Taylor roared over and over again. In the thick of all the chunky riffs, drilling leads, pounding rhythms and howling vocals, this rising punk band might have a sentimental side.