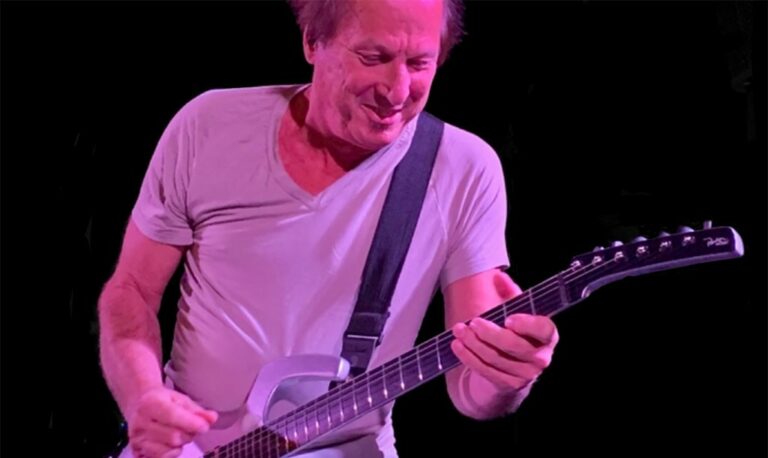 Courtesy of Adrian Below

While sharing stories about David Bowie, multi-instrumentalist and rock music icon Adrian Belew uncovers the reality of picking a favorite song from the Starman himself… it’s simply impossible with the way that man shapeshifted visually and audibly.

Adrian Belew is a criminally underrated, captivating guitarist who struck a chord – literally and figuratively – in Frank Zappa some five decades ago. That kickstarted a whirlwind career of touring the world, joining King Crimson, expanding the idea of guitar playing in mainstream media, releasing a slew of solo albums, and befriending David Bowie. At 72, he’s as sharp as ever for a musician and a man, paying homage to his history, his influences, his friend, and his career alongside the likes of Scrote and Todd Rundgren. It’s lineup filled with unique individuals and prog rock showstoppers. If you’re a fan of the classics, an artist at heart, or one of the world’s many David Bowie admirers, this is a tour not to miss. (Thankfully it comes to New Jersey on October 27 for an exciting stop at Union County Performing Arts Center, but not before two Sony Hall stops in NYC on October 24 and 25.)

There are a bunch of Celebrating David Bowie shows here in the New York/New Jersey area. We cannot wait. What are you most looking forward to about this specific run of the tour?

Well, I’m most excited about being able to play it in lots of different cities because up to this point I’ve been a part of the first two tours, but the first two we chose just, say, one major city in different parts of the world. Think: Sydney for Australia, then Tokyo, then London, then New York, then LA. This tour, though, is a real tour where we’re going from city to city, all across the United States and up into Canada for two shows there.That excites me because I want the American audiences to get a big taste of this – not just the people who are in the metropolis areas.

I’m excited about the newness of the show because it’s new people with different material… each time around. I don’t know some of the people in the band yet. It’s always fun to get to know new people and see how they interact in the show. I’m really excited to work with Todd Rundgren. We did two of these shows together at the very end of 2018 (that was the last two shows of the second run) and those were both in Iceland with an orchestra in a big concert hall. That was a lot of fun and that’s what got Todd interested in doing more of that. For this tour Todd and I can share parts, we can trade off vocals, and we can do some things that’ll make it a little more interesting for repeat [attendees], too.

That sounds so fun, so immersive.

Yeah, it’s gonna be wonderful. I can’t say enough. I think we’re gonna have a great band, and this time we have our own lights, so the production has moved up one baby step at a time.

I love that. When you’re putting something together in regard to David Bowie, there are so many elements to the visuals and the production that are worth emulating and playing homage to, so I think this upgrade will appease everybody – on top of the musicianship at hand.

Yeah, I agree. The thing about David, he was so visually oriented. I’m hoping that someday we can take this show and take it to even more levels of visual things, but, right now you gotta take baby steps and right now it’ll be centered on the music of David Bowie. A little less of the visual art of David Bowie, but, still, we do have someone in a band named Angelo Moore, and he’s more like David Bowie in the world of costumes and things like that than anyone else.

There’s a lot of people in this to have fun with. Having played with so many people over the course of your star-studded career, how important is it to have really passionate and like-minded musicians and artists around you when you’re either touring? Or even just making a record, for someone as talented as you?

Well, I think when you’re doing something as a tribute to David Bowie to celebrate his music, you have to have the finest musicians possible because his music is complicated. It’s so varied. You know, every record was kind of a completely different and new approach to art. We picked people who got that and the producers – I’m a little bit involved in picking who can do justice to certain different parts of the catalog – have like six different singers prepared. No one is trying to do it all. No one’s trying to be David Bowie. You have different people singing different styles from different eras. I do about half the show and I sing about half the time that I’m on. I sing maybe seven songs or something like that and the rest of ’em I do harmonies on. It really feels good to be able to have a good strong backing band, if you want to call it that, so that whenever whomever is on stage, they know that there is a great bunch behind them. That’s important.

Going off of that, I love that this show, especially now that it’s coming to so many cities and so many places, is a tribute. It’s not a cover band. It’s really an appreciation for the music of David Bowie rather than trying to be him or be his band.

No, it’s a celebration. Why I’m involved in it is because I love David and I had such a wonderful personal relationship with him and toured around the world with him twice. He meant so much to me. He is irreplaceable, so when I see that something can be done properly to be a really great celebration of his music, I’m interested. If it was anything less than that, I wouldn’t be involved. I’m not doing it for any other reason than to remind people of all the greatness that he showed in the world and all the different things he did for art.

For me, David was the most artistic of the successful artists in the world. I mean, most people who are that artistic don’t have as large of an audience. It’s hard to walk that tightrope. He was always the someone I looked up to because he was able to do that. I watched and thought, “If someone like him can do it, then there’s hope for someone like me to be able to have my space in the world to do it, too.”

Boy, did you find it. You’re a singer and a songwriter and a guitar player – a guitar wizard, if you will. There’s just so much uniqueness and otherworldly talent to who you are, so I am glad he helped you find your space. We should all celebrate that.

Exactly. That’s why we’re all here: to do something, to communicate your art and your thoughts to the world. David Bowie did it extremely well, and as I say, people like him opened up the ability for other people to be able to even just try and do that. Everything is not about commercial success, but it certainly is hard to combine commercial success with someone’s personal art and personal vision.

That’s very true. His catalog was able to become so vast, I believe, was because for all that was commercially successful, he had a plethora of deep cuts and fan favorites that was just as much of a representation of him – if not more him. Speaking on that, are there any David Bowie songs not on the celebration set list that you are a personal fan of and really admire musically?

Well, some of the ones that are not on this particular, or not in this particular show, we have done on the other two [tours]. Those shows had, for me, some highlights. We still have so many in this show to do [Laughs]. It’s not like I’m going, “Oh, I wish this show were different.” No, I don’t feel that way. The fact is, with David, there’s so much to choose from as we’re saying here. David was such a curious person, curious about everything and very intellectual and artistic in his choices of things. That is what is so wonderful to me about his whole catalog… he kept changing, changing, changing because he couldn’t sit still [Laughs]. He’d find new things and then he’d resize them enough to be different and then reinvent himself yet again. That’s what’s wonderful about it for me – any era that you pick of David’s, there’s always something in there that I loved.

I love that. And the fact that you had a personal relationship with him as well as the professional one is mesmerizing. You must have memories that you hold close to you and probably even draw influence from when you do these shows.

I have, what I always say, is my own personal film of David. The way he said things and did things and the way we interacted and how I watched him on stage, stood with him on stage, traveled around the world with him having dinners, going to museums… all the things that we did are irreplaceable. I know that I’m one of the most fortunate people to have had that because I did spend quite a lot of time one-on-one with him. It’s funny that he was such a huge superstar. I don’t know that many, except The Beatles and one or two other people, ever reached that level that he reached at that time, but yet when you know them as people, all of that fades out and you’re just enjoying the person himself. He was so interesting to me. There was always something new he wanted to talk about or something he was reading or watching or in the news – just anything. Like I said, he had a very curious mind.

I think David had his own means of creating. He was always trying to find new means for reinventing the language that he used; his musical language. A lot of it was private. I mean, I didn’t get to see him sit around and try to write a song so much as that’s not how it worked. It was more that things developed there in the studio so in that way, in that regard, it was very intriguing to watch because he was pretty quiet about some of those things prior to the studio. He wasn’t insistent, “Oh, it’s gotta be this way or that way.” I think he liked to let things happen naturally and then make something of them. Especially when he was working with Tony Visconti or someone because those people were really supportive of that.David was always kind of reaching out for something new and if you had something to add to that, then you were on the team. [Laughs] I think it was so much fun to be able to be a part of that. It did influence me. I’ve worked with a lot of people who have had some influence, but outside of [David], most of my influences really came from when I was really young. I think that’s only natural. However, when you really have a relationship with people who are hugely successful and professional – creative people with amazing knowledge – there’s a different level of influence. That is worth celebrating.