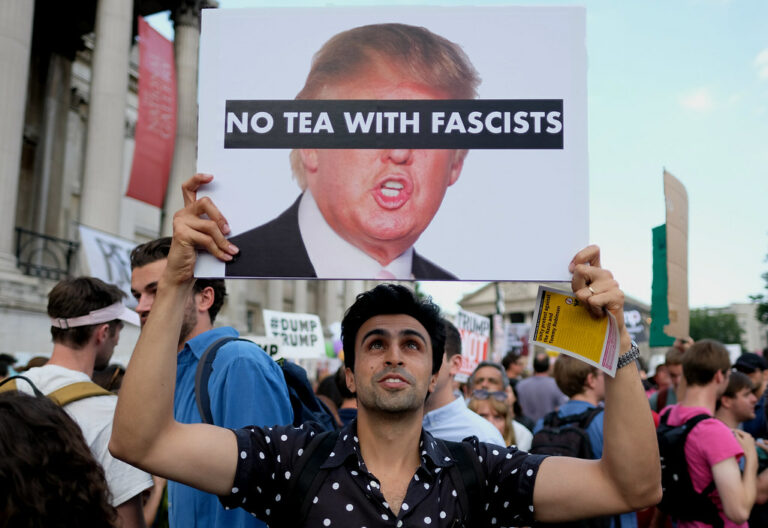 "No Tea With Fascists !" by alisdare1 is licensed under CC BY-SA 2.0. To view a copy of this license, visit https://creativecommons.org/licenses/by-sa/2.0/?ref=openverse.

I’ve got news for President Biden. Come January 22nd, we will have Pro-Life majorities in the House and Senate and we’ll be taking the cause of the right to Life to every state house in America!

The United States has been teetering on the brink of a fascist takeover that began with the presidency of Donald Trump, one in which he refused to concede, leading to months of false claims of voter fraud, frivolous lawsuits, chronic lying, and finally the attack on the U.S. Capitol on January 6, 2021. It ramped up big time this summer, as Trump’s political tool, the U.S Supreme Court ignored half a century of “settled law” to rob 51% of the electorate of its Fourth and Fourteenth Amendment rights to private reproductive freedom. For decades the Republicans wanted to take away the rights of women, said they wished to take the rights of women, and they did – and soon they will come for contraceptive rights, voting rights, and inevitably marriage equality. The umbrella of Roe v Wade and its constitutional provisions have been cast to the wind, and now all freedoms to privacy are up for grabs.

But you can do something about it, especially here in New Jersey. Vote against Republican rule. Reject fascism. Fight for the rights of all citizens to keep the government out of our bodies, our secular laws, and our right to civic union between adults.

The Fourteenth Amendment of the U.S. Constitution states: “No State shall make or enforce any law which shall abridge the privileges or immunities of citizens of the United States; nor shall any State deprive any person of life, liberty, or property, without due process of law; nor deny to any person within its jurisdiction the equal protection of the laws.”

Justice Clarence Thomas in the wake of the Dobbs decision states: “Substantive due process … has harmed our country in many ways. Accordingly, we should eliminate it from our jurisprudence at the earliest opportunity.”

The fascist right-wing Court has spoken in action and words. A former Republican VP has sent out his threats loud and clear. Read those quotes again, because they are frightening warnings to you and your sisters, mothers, daughters, and friends. Every woman is under attack – even those who are so-called Pro Life. Now the government has the right to force abortions in the future if there are food shortages or another deadly pandemic. You think wearing a mask was a bitch? Wait until they come for you organs – because they can. Don’t think it can happen? Did anyone think 50 years of settled law backed by lying candidates for the highest court in the land, who claimed it was so, and yet struck it down, would be toast in a few month’s time? Senator Lindsay Graham, who denied the Obama pick for the Supreme Court ten months before the 2016 election, turned around and changed his position on the “too close to an election decision” and rammed anti-Roe candidate, Amy Coney Barrett through. She, too, said Roe was “settled law” and voted it down. These people will say anything. I am not overstating it. Can you ever believe another Republican again? Can you afford to?

The horrific rise of the Religious Right during the Reagan Administration that began jamming Christian propaganda down our throats, railroading the First Amendment’s right to practice our own religious beliefs, and not that of one single religion and dictate its ancient laws into our secular legal construct has come to fruition. The Right has the courts, and they will likely take the House this November and as Pence stated clearly only a few days ago, they are coming for a complete national abortion ban. Keeping the U.S. Senate out of Republican hands and in two years the White House from a fascist regime must be the aim of every American who prizes freedom over invasive government and theocratic oppression. We are headed to an Iranian style construct if we do not vote… and vote AGAINST Republicans.

If people in Alabama (or wherever) want this nonsense, I feel sorry for the women and LGBTQ+ and African American voters there, but I do not live in Alabama. Thank goodness. I live in New Jersey. And I implore of NJ voters to consider what is at stake here.

Everyone who has read even one of my columns knows I am an independent and have voted Republican and Democrat and mostly Independent before, publicly backed Republican and Democratic candidates in this space since 1997, and gave funds proudly to my friend, Republican Rod Astorino’s many campaigns, while also challenging a Republican congressman to a fist fight that caused a bit of a stir, which, according to his staff, helped Democrat Josh Gottheimer get elected. But the stacking of the Supreme Court and denying the votes on Merrick Garland and the rush to vote in Amy Coney Barrett before the 2020 election by hypocrites and totalitarian lunatics who continue to defend the atrocities of January 6 cannot stand. That pales to the enslaving of women in this country, something we here in N.J. have kept ilegal, as it should be. The dismantling of the U.S. Constitution’s protections of rights to privacy is in a shambles and Justice Clarence Thomas says he will now use the Dobbs decision to go nuts.

The rest of us must ignore all Republican propaganda about inflation and supposed battling crime (where was the outrage when police were being beaten with Trump flag polls on January 6?). There has been recession and inflation under Republican control, as well as Democratic, and crime fluctuates with the times – we are still recovering from a once in a century pandemic. Republicans know as much as Democrats about any of it. Which is nothing. Those things will turn around as they always do with the movement of the private sector, which conservatives – at least since the Trump nightmare – conveniently ignore.

As Reagan said, the most frightening words are “We’re from the government, and we’re here to help.” Well, Republicans won’t do anything about any of the things they are trying to distract you to believe they can do. Build the wall? Bring back manufacturing? How much bullshit can you eat? But they will and are coming for your rights. They’ve done it already, and they will do it again. Listen to Pence. Heed Thomas. They are serious and have power or want power and we have to stop it. Especially here in New Jersey.

Keep Republican Fascism out of our state.

More and more states run by Republicans are banning abortion in every case – the life of the mother, rape, incest, health issues. They want to ban contraception next, because religious maniacs like Pence, and most Republicans, many of which are phonies who hold their noses and ignore his kind, want this. Make your voice heard. Forget protests. Bitching on cable TV. Tying to convince MAGA drones of reality. Forget that. Vote. And vote out Republicans in NJ. Support the rights of New Jerseyians.

Keep Republican Fascism out of our state.