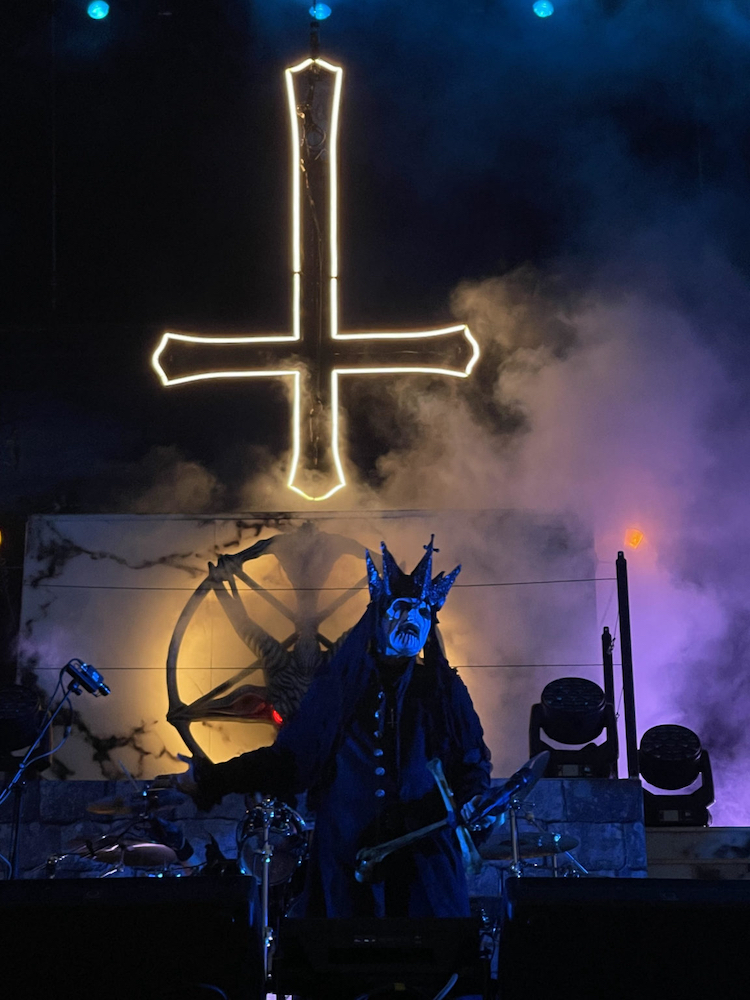 How the Stars Aligned for Mercyful Fate

The hugely influential Danes that make up Mercyful Fate are touring America for the first time in more than 20 years, generating a massive buzz among metal fans. Mercyful Fate, led by illustrious, theatrical frontman King Diamond, will perform on November 10 at the Kings Theatre in Brooklyn, with support from German thrash legends Kreator. The show will feature an elaborate production including down-to-the-minute details.

Mercyful Fate, who had been on hiatus since the release of 9, their 1999 studio album, returned to the stage this past summer at a host of European festivals. The band debuted its menacing new song, “The Jackal of Salzburg.” The track is a work in progress and local fans will hear a further evolved “Jackal” compared to the summer. The track tells the story of 17th century witch trials and witch hunts.

Mercyful Fate had a huge impact on many metal bands, including Metallica, who included a medley of Mercy tunes on Garage Inc., their 1998 covers album, which brought the band’s brilliance to a new generation of listeners. The group’s first two albums, Melissa (1983) and Don’t Break the Oath (1984), spawned metal masterpieces such as “Evil,” “Curse of the Pharaohs,” “A Dangerous Meeting,” and “Come to the Sabbath.” The songs featured King Diamond’s instantly identifiable, glass-shattering vocal range, infectious riffing, and memorable melodic solos courtesy of guitarists Hank Shermann and Michael Denner.

The band dissolved in 1985 and regrouped in 1992. They have released five superb albums since and, with a new album coming soon, Mercyful Fate will continue setting a very high bar for contemporaries and upstarts alike.

Mercyful Fate today consists of Diamond – who we recently spoke to – as well as Shermann, guitarist Mike Wead, bassist Joey Vera and drummer Bjarne T. Holm Vera, due to a commitment with Armored Saint, is sitting out the tour. Becky Baldwin will handle bass duties.

Mercyful Fate is on its first North American tour in more than 20 years. Why so long and why now?

[Over the years] I’ve had that question from fans: “Are you going to do a Mercyful Fate tour again’?” I’ve had the same answer for a long time: “Well, if the stars align properly, yes.” I’m not interested to go out and do a tour with a simple backdrop and make money and that’s it. That’s not what we do in Mercyful Fate. It has to be absolutely top-notch, top quality. It has to be honorable for the name. You cannot disgrace the name.

After we got management two or three years ago – it’s the first time in our career we’ve had management – something happened with that. New opportunities were suddenly made available to us. Management decided to put out some feelers to get some feelings about what the environment was like for Mercyful Fate to go do another tour and record some more. We had wanted to do Mercyful Fate shows starting in 2020 but because of COVID it got pushed and pushed until now. Then came a lot of interest in festivals in Europe. We had found that they are so interested that we would be relatively high on the roster, and it also meant that we would have some money so we could build a proper production.

I can’t wait to get in the States and get started. I enjoy it so much. A complete new stage set was built for America and it’s a complete production. The shows in Europe were missing parts. You can’t fly a whole production over and you don’t have the time to put it on a container across the ocean. Now containers are costing three times as much as they used to and you don’t know when they’re going to arrive, so this is the way you do it.

The cross is a different cross form Europe. We finally got the right one. The gothic arches upstairs on the side of the altar are going to look absolutely amazing. It’s been a long journey to get this done – a lot of things have taken place.

You’ve been performing a new song, “The Jackal of Salzburg.” It sounds like classic Mercyful Fate with a new edge. What can you tell us about it?

It will be a nine-minute single when it is completely done. It has an intro and an outro that you have not heard. Writing that song started very much like the old days. Hank first presented me with seven minutes, I would paste and copy and do some arrangements and adjustments, then Hank would come back. This is Mercyful Fate as it should be.

King Diamond is working on an album: The Institute. It’s a full story. We were supposed to be out playing King Diamond right now, but we have such a lavish show and production that it would be a waste to do it now and just play three new songs. It has to be the full album. When that comes out in the middle of [next] year there will be a full-length King Diamond tour. It will be something that’s what you’ve not scene before on a stage. Mercyful Fate was suddenly presented with the opportunity now that maybe we could do a Mercyful Fate tour.

What is the story behind “The Jackal of Salzburg,” anyway?

We were so lucky to go into the place where the song took place. It’s two hours outside of Salzburg. The song is about the witch hunts and the witch trials that were going from 1675 to 1690. A very young man, 20 years old, saw his own other mother burned alive. Two years later they started hunting for him. There were papers and confessions that had been made by his mother while being tortured, where she also gave up her own son as being the devil or something like that. They started hunting him in the forest around where this castle is. The guy was never caught. It’s still called Salzburg but it’s actually two hours away from the city of Salzburg.

There are beautiful mountains and woods. It’s such a beautiful countryside. When the song officially comes out as a single, there will be video of me talking about the castle while standing outside of it. We have some footage inside the castle. You’re not allowed to do it but we found a way. The witch trials were a complete horror. The castle is very powerful and very haunted, though we didn’t see anything. It was just ominous.

We saw the torture chamber; it has a lot of these things that people died on. The wheel that pulled people apart. They’re there. The room where the Bishop would sit himself – that’s where they had the sword of justice. A sword engraved inside with the gallows on one side and the other side had the wheel and he would spin it and it was not a matter of whether you were guilty or not but how you were going to die. It was quite an emotional experience. So it got closer to me, the whole story behind the song, which will be the new single not too long after we finish the tour.

We’re doing what we played in Europe. We are not changing the set but we are going to change the sequence of the songs. We played the first 10 shows in Europe with one set with a certain sequence. After the first 10 shows we had a two week break so I came home and I started working on, okay, that flow is not the way it should be. So I started moving songs around and told Hank I’m going to do this and it works. I have a lot of costume changes and you have to get it perfect. Hank said, ‘oh my God, what a difference.’

When you write songs, how do you know if they’re going to be for Mercyful Fate or King Diamond?

It’s usually clear. If it’s super theatrical it will probably go to King Diamond. If it is more like old fashioned heavy metal with a five-piece band it goes over to Mercyful Fate. There is one song specifically when I think about it; it should have been a King Diamond song, but only one that I can really say that and that’s the song “Time,” the title track of that Mercyful Fate album. It sounds to me way more like a King Diamond song than a Mercyful Fate song. It has harpsichord, it’s very theatrical, and the lyrics are very theatrical. It’s all about people physically taking moments of their life and putting them on a shelf and maybe trading them for someone else’s experiences. So you have one there.

You have a new touring bassist. Can you tell us about Becky Baldwin and how she came to enter the fold?

Joey Vera is permanent though he cannot do this tour. He asked us over a year-and-a-half ago, “Can I do something at this point in time?” We said, “Yeah, King Diamond will be out at this point in time. Absolutely no problem.” For him, it’s like he so wants to be in both places. Armored Saint is his baby. He was part of the beginning so I totally understand where he comes from. We all do. It will be fine. He is 100% the bass player for Mercyful Fate.

Becky is an amazing bass player that we found to stand in for Joey on this tour. She is a finger player, it had to be finger-player like [original and late Mercyful Fate bassist] Timi Hansen did it, like Joey. That’s what we were after. Our musical style is so unique. Becky is so dedicated – you can just feel that she’s music, music, music. In videos she plays Iron Maiden stuff, Black Sabbath, Mercyful Fate, and King Diamond. We saw videos where she was teaching people. I saw some interviews that she had done. I thought that was someone who would be perfect for the job. We called her and she came out to the States. Joey worked with her and she’s ready to go, 100%. That’s what’s happening now: a lot of stuff going on and it’s very difficult to maneuver between everything but it is great to be doing it all.