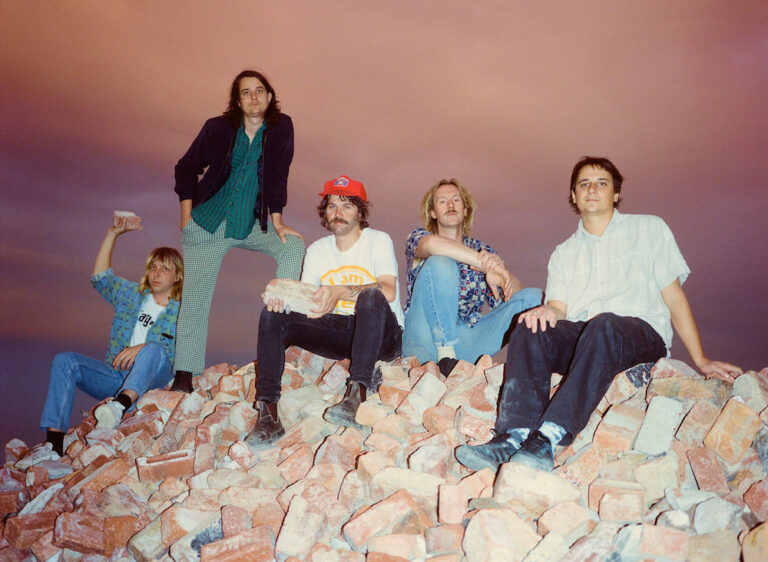 There’s quite a buzz around this band, now more than ever, so a Buzz Feature felt more than appropriate with a New York show just 48 hours away…

Australian-psych rockers The Murlocs have steadily accrued a dedicated following over the past decade and have largely stepped out of obscurity and into the indie spotlight. With six studio albums and a rigorous touring schedule – including tours with fellow Melburnians King Gizzard and the Lizard Wizard – Uncle Murl are about to embark on a headlining U.S. tour. They glimmer on stage and riff around gloriously. We chatted with the Murlocs’ lead vocalist, harmonica player, percussionist, keyboardist, guitarist, and all around mastermind, Ambrose Kenny-Smith, before they hit the road.

Hey, Ambrose! Pleasure to meet you. How are you? Where are you calling from?

Ey, yo! I’m currently in Philly at our Airbnb on a day off before we do two days of rehearsals then begin our US Tour – starting at Underground Arts. Feeling pretty burnt out from this recent Gizz [King Gizzard and the Wizard Lizard] tour that we just finished [in the US], but I’m really looking forward to finally playing these two new Murls’ albums over here. It’s been a long time coming.

How has your tour been so far? What is it like to be back on the road?

We supported Gizz in Austin for Levitation, Oklahoma, and Red Rocks. All three shows were so dope. Cavs [Michael Cavanagh, drummer for King Gizzard and the Wizard Lizard] filled in for us in Austin as our drummer had his sister’s wedding on the same day back home in Aus. Cavs killed it. Matt [Blach] arrived in OKC the day after and we got some last minute Halloween costumes for the show. That night was really fun. Can’t wait to start this tour and get really tight. The new songs have been a real joy to play live.

Do you have a favorite city you like to play when you tour the U.S?

I think it changes each time, but NYC is always a highlight. I still have a big soft spot for the Big Apple. Looking forward to playing Nebraska – never been there before. There will be a few places on this tour I haven’t been yet, so who knows? It might change.

You just played Red Rocks! How cool was that?

The Red Rocks show felt really good. We were pretty warmed up by then considering we hadn’t played together for six weeks or so. Huge rocks, huge sound, huge vibes.

How do you craft a setlist?

I often struggle, to tell you the truth. I wish we had more up-tempo songs. I think now with Rapscallion we finally have a few more of those. I think this tour will be mostly crafted around that album plus as many Bittersweet Dreams songs as possible. We have a fair few albums now, but we don’t really enjoy playing a lot of the old stuff. In recent years, we have tried to rehearse a few tracks that we never play live and they just felt a bit boring. I feel like our new stuff is just way more exciting.

The new album, Rapscallion, is noticeably more rock-oriented than your previous work. What was the writing process like compared to other albums?

The writing process for this one was a lot different. During the pandemic, our guitarist Cal Shortal really came out of his shell and shined more than ever before. He wrote and recorded all the music as demos then we all just played on top of them and added our own flavors to the piece. It was the first time I had the chance to force myself to write more conceptually with fiction based on some facts that happened through my adolescence. Derivative from my upbringing as a feral skate kid, I took a bunch of these experiences and put them into the coming of age story of Rapscallion. This record is by far our best achievement yet. [We] are very proud of how it all turned out and came together. Each song is in sequence from start to finish; a novel in album form.

Are there any songs you’re particularly proud of on Rapscallion, this album you just described as an achievement?

Recently “Growing Pains” has been really fun to play. “Bowlegged Peg” […] will be a definite highlight. We have only played it live once but it’s probably my favorite off the album. Hopefully, we can jam out on the bass line for a bit longer.

Is there any intention to continue with this new sound, or was this an experiment?

I hope that we can do more upbeat rocking albums like this, but I don’t think we’d ever be able to top Rapscallion as a whole. Not sure how I would ever be able to write in that same way again. Everything I usually write about is pretty factual and from my own personal perspective. Most of the music I enjoy from my favourite songwriters are all based on this aesthetic. Needless to say though, I hope we can still make more heavy music like this for sure but the message will be different.

After this tour wraps up, what is next for The Murlocs?

Back home for a well needed rest then hopefully an Aus tour in April/May next year. We also have another record that is done and dusted. I just need to get the artwork sorted, which is on its way to being finished in the next few months… I hope. Keen to put out new music ASAP.

This tour is gonna be a lot of fun! Bring on the PBR’s and Chipotle.

THE MURLOCS COME TO BROOKLYN’S MUSIC HALL OF WILLIAMSBURG THIS WEDNESDAY, NOVEMBER 9! FOR TICKETS AND INFORMATION, CLICK HERE!