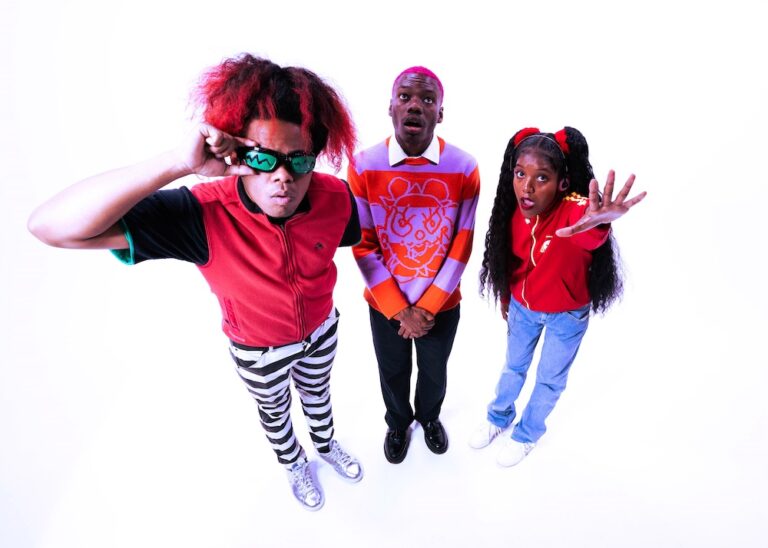 The Understated Psychedelics of BLACKSTARKIDS

BLACKSTARKIDS are blowing up… and they should be.

Bouncy, bubbly, brilliant, and bold, BLACKSTARKIDS are making music that is like nothing you’ve heard before. Well… that’s not necessarily true. The masterminds behind the music are open about the influences that shape the songs and the inspirations that make them who they are. It how they blend it with such funk and such grit that makes it original, boisterous, and memorable. Trio Deiondre, TheBabeGabe, and Tyfaizon put all of themselves into their art… and somehow give even more to their performances.

As Kansas City’s pride and joy of the 21st century, it’s a thrill to watch former high school friends take on the globe, visit new places, and become the eccentric musical influencers of their generation and beyond. Their unique blend of trap rock and electro pop makes for an almost visceral listening experience… one with a whole lot of dancing, grooving, thinking, and feeling.

Just days before opening for The 1975 (!) at Madison Square Garden (!!) right here in the Big Apple, we sat down for a quick Zoom with the three introspective, über-creative artists, who just so happen to be best pals and close collaborators.

You’ve been releasing music pretty consistently over the past few years, so what was it like to build out a set list for these live shows with The 1975 – of all bands? I can imagine there’s a lot to choose from, but also a lot of favorites no matter what.

Deiondre: Yeah. It could be a bit of a struggle. Honestly, we’ve been thinking about the set list for months up to this point… and then we’re already making changes. We’re figuring it out as we go, but we already have a pretty solid understanding of what we want to do. There’s always this… conflict of… how maybe the songs that perform well live aren’t necessarily always our favorite songs or our most popular songs. I feel like when you’re doing the opening set, not too much is going on there with the intention of performing for your fans. You’re in there trying to make new fans, so you just want to put on the best show. A lot of times people are like, “Oh, I’m a fan. Why didn’t you play this? Why didn’t you play that?” And it’s kind of like, if we were doing a headline show, then that would definitely matter, but honestly it doesn’t really matter as an opening set since we’re just trying to have the best show that we can. Sometimes a song that somebody might love is not the best song to do live, you know? We’re trying to give a good first impression of all of our music within that 30 minutes – kind of show the range of what we can do as best as we can within 30 minutes. With the type of band we are, too, it’s hard to reveal all that we can do with those 30 minutes as it is.

There are some songs, for sure, that are headphones-main-character-moment types, but there are also off-the-wall bangers. Balancing the two has definitely got to come with a little bit of a difficulty.

Deiondre: Yeah, thank you. Yeah, it is. When we do like a headline tour or our own show or whatever, we’ll strike much more of a balance. Right now it’s like we’re just trying to jump and scream the whole time [Laughs]. I’m really looking forward to putting together a show one day that really takes you everywhere emotionally.

Gabe: It’ll be more of the BLACKSTARKIDS experience on stage. We will give everything and get everything.

The BLACKSTARKIDS experience – oh my gosh. Even at this point in your career, you’re already looking to be creating worlds for your work and continue building these soundscapes that are really rooted in the lyrical context and the musicality, but also the production. These songs are outstanding because of the production qualities and little tricks found in the layers. What is the production process like for you guys on that internal end of things?

Deiondre: Well, whenever we make a song, it’s always done together. Our idea just kind of feels incomplete without us altogether in the same room, without all of our heads together. It always starts just with me starting up on the beat, then Ty usually has some parameters to work within a kind of vibe that we want to go for. We like to build off that. Then Ty and Gabe are able to build off the sound from there. That’s done within a day session and stuff. We’re just all about getting the energy and the idea captured right then, right there.

Ty: For sure. It’s like… we’ve done songs where we’ve had to come back to it and step it up by a notch, but sometimes we just don’t like doing that ‘cause the energy isn’t captured there like the first time you had the idea.

Deiondre: We’ve actually been doing that more recently – having multiple sessions for the same song. Even recently, on a new project, there’s a song called “NUYORK V2*,” which is the first song we made for it. We only ever had one session for that song. We made the whole song in that session. Now it’s a lot more of a gradual process with the making of the songs, the ideas, and the experience. On SURF, I swear to God we were making some of those songs in like 45 minutes. [Laughs] We made two songs at once on SURF – we did that twice. There’s two days where we made two songs for SURF in one day. We could never do something like that again. I could not imagine it. It was just the situation back then because we didn’t live together yet, so whenever Ty and Gabe came over to my house to make some music, they would just try and make the time count for sure. That meant to be working for real.

Especially when you’re young, there are a lot of boxes to check off, but the fact that you’re in a place now and you’re able to really take the time to hone in on a song or come back to it is great – even if you don’t always feel like you have to. I think the key that you mentioned, though, is collaboration – the fact that it’s all really collaborative? We love to hear that.

Deiondre: That’s our favorite part of doing all of it, honestly. We just started involving our live drummer Jack in some of the recordings, too. When we just recorded in New York for CYBERKISS*, he played on a good handful of the tracks.

Gabe: You can feel the whole difference with that, too.

That must elevate it even further.

Deiondre: Yeah, for sure. He added a lot to the sound. If you listen to like CYBERKISS* versus the other projects we’ve [released], you can find a difference in the energy. Jack is like a big part of the reason for that switch in energy and the sound.

On the note of CYBERKISS* as a whole package, you have the single “CYBERKISS 2 U” out. Which came first? The single, a pseudo-title track, or the album title?

Deiondre: The title for the project came first, but before we make a project, we write the tracklist out before we like to start working on it. For CYBERKISS*, we knew we were gonna have a song called “CYBERKISS 2 U.” I wanted to have a song called “CYBERKISS*,” but we didn’t want to just make it like the first full blown title track because we’ve never done a title track before. We did want to do something with the CYBERKISS* thing, so the ideas came together, but the title came before the song.

With influences in mind, when creating CYBERKISS*, what were you all listening to, personally, as you were making it?

Gabe: We really listened to a lot of Timberland, Neptunes, LCD Soundsystem, a lot of 2000s stuff… Outkast!

Ty: Yeah, Outkast was a huge influence on the project.

Deiondre: There was definitely a lot of Outkast at that time around when working on the structure of the project. […] As Gabe said, like Outcast’s Speakerboxxx/The Love Below and Velvet Rope by Janet Jackson. We were listening to a lot of those albums because they do so much within the realms of one album. They have so many sounds, but it kind of comes together to make sort of a collage of sounds. When we were first making projects, I had this thing where I was like, “Ok, everything is going to be like 10 songs with a title and be concise.” I don’t know what happened, but I’m not into that anymore. I’m into longer projects with so many soundscapes and have done away with the whole thing being concise. We’re now into this idea of, “Let’s create a world where there’s a bunch of things happening.” That’s just the best stuff for anyone brand new to stumble upon. I feel like Black eclectic artists should make long projects, because the way that we think about projects is that we want people to be listening to our music for 10 years, you know? There are some albums that I’ve been listening to for 10 years and at first I liked certain songs from Love Below, “Prototype,” as an example, and that’s actually even better than “Ghettomusik” on Speakerboxxx. When I was a kid I used to skip these songs, but now I listen to the songs and I love them so much. My favorites changed. I want people to be able to listen to CYBERKISS* now and then come back to it. My first favorite song was “SEX APPEAL” off CYBERKISS* but now it’s “NUYORK V2*.” In like two or three years I might be like, “Oh! I actually really like ‘PEACH COBBLER’ and I enjoy ‘DO THE RIGHT THING’ extra now.” I want to give people the option to change their favorites as they grow. When we do longer projects that have this collage of sound, there’s just so much more room  for that to happen and so much more room for us to like to express ourselves.

FOR MORE ON BLACKSTARKIDS, FOLLOW THEM ON SOCIAL MEDIA! FOR TICKETS TO THE 1975’S NORTH AMERICAN TOUR, CLICK HERE!