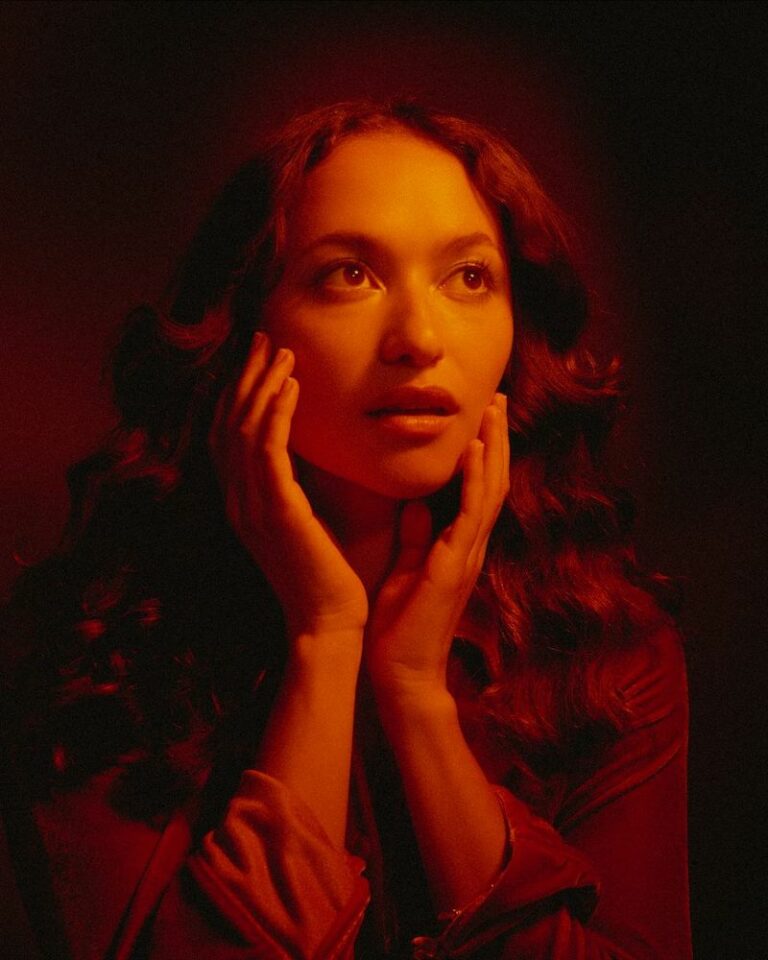 Ever Ethereal, Extra Dynamic – Conversation No. 2 with Eva Rose

A few questions with Eva Rose – a year after our very first feature with her.

Like pages ripped out of a diary or a glimpse into the brain of a budding star, Everything You Wish For is an astonishing dream pop look into the inner workings of a mid-twenties artist carving out her path and finding her way. Actually, she’s just about found her way. This EP follows up her debut and there is a new air of cohesiveness to it – confidence, as well, Eva Rose adds. We spoke with the Brooklyn-based talent to dive deeper into this sophomore release and the world, people, and feelings that come with it. (This is, of course, in addition to the guitar-driven vibe and grittier storytelling… including one that literally and figuratively slays.)

I really wanna talk about “Final Girl.” I am so obsessed with the entire concept around it. It’s such a good little mini movie of a song. I mean, you sound amazing, but if you were to read these lyrics almost like a poem or a short story, there’s so much depth to it. How did this song come together with this creative horror movie twist?

Yeah, so it was actually funny. I had the title “Final Girl” just in the notes of my phone forever and ever. (That’s how I write it. Usually an idea will come to my head and I’ll just write it down and I’ll return to it later if I have an idea for it.) Weirdly, I was kind of obsessed with the concept of ‘the final girl’ in a movie, which is funny ‘cause I’m not even a huge horror fan. I’m a little too squeamish for horror, but I just love all the discourse and everything with the analysis videos that sparked around how women are portrayed in horror and the themes around purity and femininity and victimhood and even virginity that comes up. I just thought it was so interesting. I eat that stuff up [Laughs]. So, I had this note on my phone before I went into a session with my producer and longtime collaborator and also really good friend, Dom. His producer name is Florio and he’s so great because he literally lets me come to a session with anything. He’s like, “Ok, let’s work on it,” and never has any moments of, “Oh, that idea’s a little weird.” I told him that I really wanted to write a song about finding out you’re living through a horror movie and the person you’re with is a serial killer. And he’s like, “Ok, cool. I’m also kind of a true crime fan. This sounds right up your alley, let’s just get into it.” We got out an acoustic guitar and immediately the chorus came out. He was working on the track right with me and I didn’t pull a lot from my personal life. I always do, because obviously I’m a person who writes a lot from personal experience, but lucky for me, I’ve never encountered a serial killer. But I was kind of thinking, “Hmm, if I was this character, what would happen in this story?” I weirdly pulled a lot of inspiration from the show, You, too. [Laughs] I specifically thought of Beck and Joe. It was kind of a fun writing exercise in a way to just step out of myself and into a different kind of character and to just play around with an idea that kind of feels a little, you know, outlandish with people to give a little side-eye to. I thought it was a nice little departure from the other songs that I write and, for as morbid as the song concept is, Dom and I had so much fun writing it… especially the bassline. He came up with that and we were like, “Oh, is this gonna be like a disco beat? Is this gonna be kind of a morbid but kind of dancey sort of tune? Ok!”

I’m glad you’ve never encountered a serial killer [Laughs], but I do quite admire how you mentioned that you write from personal experience. You told us all about that last year and it’s important to continue to do so, so would you consider that the best advice for people who are trying to put themselves out there, fellow up-and-coming creatives like yourself?

[…] Even in this crazy time and this crazy socioeconomic, political time we live in, and during a pandemic, the thing that will always help you and be the best propeller is making what feels authentic to you. I know it sounds corny, but I find that I’ve found the most momentum when I’ve truly taken the time to tap in on what I want to say and what I want my music to sound like, regardless of what other people around me are doing. And, you know, I constantly feel like in this day and age, especially around social media, we have to constantly be doing temperature checks on how people are gonna perceive what we say. “Is this the right time to be talking about this thing?” I know that especially during the pandemic and especially during the Black Lives Matter protests and the height of the movement, a lot of people were putting their music and self-promotion on a hold, naturally, because it feels a little weird when there’s all this social unrest and these crazy historical moments happening in real time to be like, “Hey, by the way, look at me.” I feel like regardless of self-promotion or putting yourself out there, I think the best way to really fortify yourself as an artist and set yourself up well, is to propel yourself forward as you and nobody else. […] You know not exactly what you’re doing, but you feel very confident and prepared in your pursuit because it’s wholeheartedly yours.

With that being said, I can imagine that it takes time and effort to then find the right people to work alongside and who share your vision, but then again, it’s probably massively inspirational and rewarding to see and hear what comes out of you and your career when working with other artist people, creative perspectives.

Definitely. I would say the best thing that’s ever happened to me, personally, and in my journey as an artist, is finding people that I love and trust and have so much creative chemistry with. Music, for me, was always super vulnerable. When I started writing music when I was around 14 or 15, I’d never shared it with anyone. I never sang in front of anyone. It was so vulnerable – too vulnerable. I was like, “No, no, no! I don’t want anyone to see this!” I mean, rightfully so. The songs were probably trash, but everyone knows that you gotta write a hundred bad songs before you get a good one. I think sometimes being creative in any facet can become very lonely because it feels like you’re totally on your own as you put all yourself into it. Especially if you’re looking to make a career out of it, it can be isolating and feel so lonely as it feels like you’re pushing a boulder up the hill and the boulder is the act of really being vulnerable, digging down, and creating something out of it for you and by you. Finding people to collaborate with and to support you – to find your tribe – I think has been so important to me. And it’s been so helpful because I’m a Virgo, I’m hypercritical of myself and my work. Sometimes I’ll work on the phone and be like, “This is trash. No one’s ever seeing this,” but ever since I started collaborating, I’m like, “Oh, no, other people have their hand in this. This is not just my work when it’s also the work of other people I have been in sessions with.” I would say for any artist, start collaborating early and co-writing early. It is the best thing you can do.

There are even artists I work with who makes jokes now about how “this is such a Dom melody” and how “this is such an Eva line” and how “this is such a Rachel [Bochner] melody” when listening to things back. We can sometimes start repeating ourselves and get our own head. I remember in a songwriting class at NYU we were talking about how it’s good if you plagiarize yourself because that means you have a style and you have a thing [Laughs]. It’s always great to have other artists and writers in the room who could give you a new perspective, though, saying, “Oh, well you’ve done that before. Let’s try this. Let’s try things that you’ve never done before creatively.” I think it’s just so important. Also, it’s just great to have friends who are also artists and writers and creatives that you can vent to, talk to. You’re living this shared experience with them and sometimes it feels like, “Ugh, nobody knows what I’m going through except for these people,” so it’s helpful to have them in that case, as well. The journey can feel lonely, so to have people there with you, not only just like creatively and in the form of collaboration, but also just in terms of friendship, it feels very rewarding and very important.

The last time we chatted we talked about where you see yourself in the next five years of releasing more music, new projects, doing shows, things of the like. “Final Girl” is out now and when this feature goes live so will the whole Everything You Wish For EP. Going off of that, similarly, a year later, what are we thinking or what can we share for what’s next with you?

Well, I’m very excited to say that I will be putting out that second EP. It’s a seven track EP, so longer than the first one at five [tracks]. “Final Girl” is the last single, so with all the singles, there’s like four extra songs for people to enjoy. I’m very excited about it. It feels very special because it feels super intentional. People always say you have your whole life to write your first EP or album – it’s collections of songs you’ve gathered on the way. This time, coming out of my first EP into this second project, it just feels different. It feels good. I like the confidence – I have more confidence as an artist, as a writer. It’s been really fun to curate and pick through the songs I’ve written over the course of the last year, and now getting to finally share them and to create a story with the whole project itself? It’s special and it was a journey and I’m nervous and I’m excited for it to be in the world – everyone’s world and not just mine.

EVERYTHING YOU WISH FOR IS OUT NOW! KEEP UP WITH EVA BY CHECKING OUT HER INSTAGRAM!