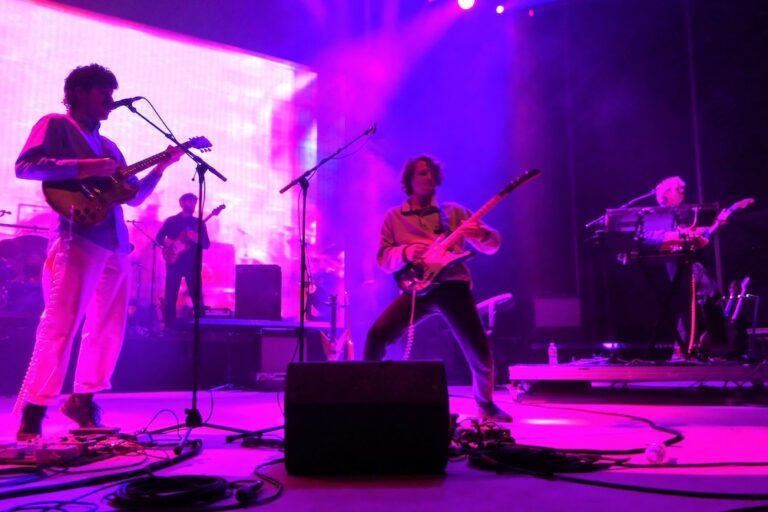 The concert was King Gizzard & the Lizard Wizard’s first live appearance in New York City since 2019. The band was scheduled to perform at the Kings Theatre in 2020, but that concert was canceled due to the pandemic. During the extended pandemic lockdown, the band recorded prolifically, ultimately releasing seven studio albums, two live albums, and an EP since its 2019 tour.

Following live sets by Leah Senior and black midi plus intermission dj sets by Jonathan Toubin,  King Gizzard & the Lizard Wizard appeared on the Forest Hills Stadium stage in front of a towering LED screen. As the musicians began playing their instruments, a light show blazed flashing and fast-changing colors across the backdrop. As the musicians played, the kinetic shapes and colors were designed to be an integral part of the audience experience, the frantic lighting established and amplified the dynamics of the band’s music. Ironically, however, the dizzying images all too frequently obscured the band, who seemed diminutive against the screen.

With a plethora of recorded music from which to select, what would King Gizzard & the Lizard Wizard perform? The band is known for playing unique shows at every tour stop. The prolific band’s 23rd studio album, Changes, also the band’s fifth album release in 2022 and third album in October alone, was to be released a week later. The Gizz did not perform any songs from that album.

The set began with “The Dripping Tap,” which even on the Omnium Gatherum album was an 18-minute cut. As the band fleshed out the song on stage, this jam evolved into “Magma” from Ice, Death, Planets, Lungs, Mushrooms and Lava, an album that was inspired by “The Dripping Tap.” Like these songs from two of the band’s five 2022 albums, much of the ensuing set drew from recent product. King Gizzard & the Lizard Wizard performed 11 songs, some in medleys, from six albums released from 2017 to 2022. Unlike many other bands that this year played the exact set intended in 2020, the majority of KGLW’s repertoire at the stadium did not even exist yet in 2020.

The majority of the set this night was comprised of loud and fast songs. The guitarists noodled extended leads as the rhythm section pounded a high-energy drive. The vocals were somewhat buried in the mix. As the show progressed, the guitar-fueled jams grew longer and looser, allowing for further experimentation and improvisation.

King Gizzard & the Lizard’s set proved that the band is among the pioneers of a new music scene that has roots in psychedelic music, yet is far more than a revival of an old sound. While the set paid respect to the psychedelic music of the 1960s, decades before any of the musicians were born, the music was not at all trapped in a time warp. The speed and intensity of the performance was turbo-charged by a very modern rock aesthetic. The band’s growing popularity shows that there is a market ready to support this innovation.