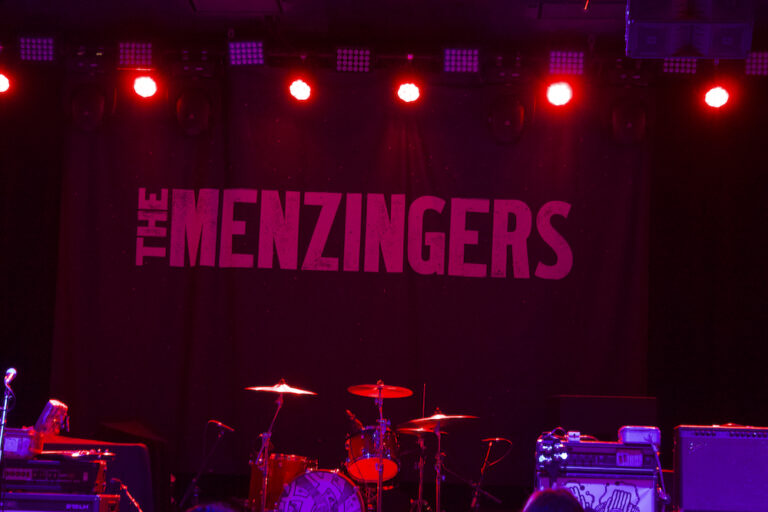 In February 2012, a budding punk band from Philly named the Menzingers released their third album, On the Impossible Past, to universal critical acclaim. A decade later, the band is much more popular, selling out nights of a tour to celebrate that album’s anniversary. Four of those nights were at the House of Independents in Asbury Park; a city dear to them and referenced frequently in their lyrics.

Joining them in honor of this album’s anniversary were the New Brunswick band Screaming Females and post-hardcore champs Touché Amoré.

The trio of Screaming Females’ guitarist and vocalist Marissa Paternoster, bassist Jarrett Doughtery, and drummer Mike Abbate took the stage at 8:00 p.m.. The trio got their start doing basement shows near Rutgers University, which garnered them a predominantly local following among the DIY Jersey punks. Marissa, dressed in a black and white striped dress, commanded the stage, shredding talent on guitar and announcing her presence with her raw screams. Jarrett strummed a Rickenbacher like Lemmy, while Mike drummed like a metronome.  The crowd was unsure at first, but quickly warmed up to them. Their energy was eruptious. Only a half hour set, but many new fans won over.

Touché Amoré was up next and hit the stage just before 9:00 p.m.. The lineup of guitarists Clayton Stevens and Nick Steinhardt, bassist Tyler Kirby, drummer Elliot Babin, and vocalist Jeremy Bolm have a long history of sticking out in the post-hardcore underground. My best comparison for them is to the likes of La Dispute, Thursday, and At The Drive-In. Modern classic albums of theirs include Stage Four and Is Survived By as well as 2020’s Lament. Touché Amoré is known for their electric live performances, so needless to say, I was stoked to finally see them.

A man rushed through the crowd as soon as they took the stage with “Come Heroine,” pushing his way into the pit. Jeremy extended the microphone repeatedly to the crowd piling upon themselves to have their moment in the limelight as he paced around the stage. Bolm has the charisma of Henry Rollins. In between songs when he would address the crowd, he had almost no voice because of his demanding screams.

Touché’s setlist was stacked with hits from Lament and Stage Four, including “Rapture,” “Reminders,” and “New Halloween.” Their deeply personal lyrics, their gritty technical ability, and their high energy make them one of the best live bands I’ve seen this year.

In between bands, the playlist of The Smiths, Nirvana, and The Buzzcocks played over the speakers as the building filled the gills to see the Menzingers. The lights dimmed just before 10:00 p.m. as the quartet of bassist Eric Keen, drummer Joe Godino, and guitarists/co-lead vocalists Tom May and Greg Barnett hit the stage. Greg played the opening chords to “Good Things” to warm us up before striking up the lyrics, “I’ve been having a horrible time, pulling myself together.” The crowd shouted in unison and formed a mosh pit.

They played On the Impossible Past start to finish – “Burn After Writing,” the fan favorites of “The Obituaries,” “Gates,” and “Ava House” started the album play-through. During “Ava,” the band paused as Eric continued the baseline to do a shot of tequila and cheers the crowd. “Sun Hotel” followed with a particularly rowdy pit for them. “Sculptors and Vandals,” “Mexican Guitars,” and the titular track were played followed by a funny anecdote of “On The Impossible Past.”

“We were writing the album at Eric’s house upstate,” said Greg. “And some of these songs were written rather quickly so we could go have fun on Eric’s boat. That song, was a boat song.”

The album set finished with “Casey,” “I Can’t Seem to Tell,” and lastly “Freedom Bridge.” We all cheered for the humble four before us; all smiles and contagious energy throughout. But they were not done yet. The opening chords of “Tellin’ Lies” were strummed and I hopped back in the pit, camera in hand. Then, “House of Fire,” 2019’s “Anna,” and Rented World’s “I Don’t Wanna Be an Asshole Anymore.”

The four left the stage and re-emerged for a few more songs. “Lookers,” “Rodent” (my first time hearing it live!), and lastly, “After the Party.” I screamed along so loud I was barely choking out words.

I discovered the Menzingers in 2017 with After the Party and fell in love. From there, I did a deep dive into their other albums. I did not grow up with On the Impossible Past, I came in a little after the party (Get it?), but I can appreciate its significance- an album that’s thematically about memory. It’s an ode to friends lost, road trip nostalgia, struggles triumphed, and antiquities of past selves that everyone can relate to on some level. I often reflect on how The Menzingers’ music has resonated in my own life since I first discovered them: four jobs ago, three degrees ago, three girlfriends ago, a pandemic ago.

I’ve seen the Menzos four times now, and every time I do, I have the time of my life. I leave the venue an extra-sweaty mess, no voice, a bunch of new friends, and another set of memories to store in my cabinet brain. When I saw them at the inaugural Sea.Hear.Now. in 2018, I was swinging from a lamppost on the Asbury boardwalk.

Tom cracked a joke about doing four sold out nights in Asbury Park; something along the lines of only playing in Asbury Park shows forever. I know it’s a joke, but, Tom, please consider it.