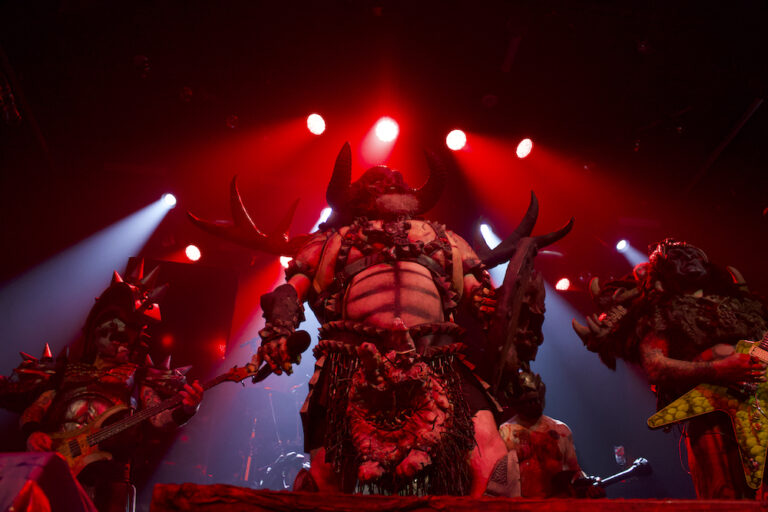 GWAR, aka The Scumdogs of the Universe, traveled to our weak, Earthling planet for their fourth annual Halloween takeover at Irving Plaza two weeks ago today. Joining them on their sold out Earthly siege were Nekrogoblikon and Crobot. You can’t spell spectacular without spectacle, which GWAR certainly is… and what a delightful birthday present to me it was.

For those unaware of our alien overlords, GWAR joined forces in 1984 when they crash-landed in Richmond, Virginia on a mission to demolish humanity. The current horde of drummer Jizmak Da Gusha, bassist Beefcake the Mighty, rhythm guitarist Balsac the Jaws of Death, lead guitarist Pustulus Maximus, co-lead vocalists Bonesnapper and Sawborg the Destructo, and lead howler Blöthar the Berserker have accrued 13 studio albums, two Grammy nominations, and several million gallons of blood (estimated) poured on their fans.

I saw GWAR at Warped Tour in 2017. They were one of the final acts of the day. On the adjacent stage before GWAR were on, the lead singer of blessthefall, Beau Bokan, was bashing them. He told the audience about “true talented bands” that “don’t have to rely on gimmicks,” implying GWAR by pointing at their stage, and told them to skip and come back afterwards. GWAR’s response? A papier-mâché head of Beau that was swiftly decapitated. I think GWAR won that argument.

New York City humans dressed for the festivities – comic book heroes, cult-horror movie characters, steampunk cows, and a lot of people dressed in all white in hopes GWAR will paint them red, blue, or pink. Even John Goblikon, the frontgoblin of Nekrogoblikon, upped his costume game by wearing a Mario costume. The rest of Nekrogoblikon dressed as other Super Mario characters – Yoshi on keyboards, Bowser on drums, Donkey Kong on bass, Peach on guitar, and Luigi on co-vocals. Their seven-song setlist included staples such as “Powercore” and “Bones,” as well as three songs from their album released in April. John Goblikon had an impressive electric ukulele solo- so impressive, it sounded like a keyboard… before he smashed it.

Crobot took the stage afterwards – a young quartet from Pottsville, PA. The decade-old band of bassist Tim Peugh, drummer Dan Ryan, guitarist Chris Bishop, and lead singer Brandon Yeagley delivered an electrifying performance; uncontainable bursts of energy, stellar instrumentation, a moving tribute to Chris Cornell with their song “Golden,” and even a cover of Dio’s “Rainbow in the Dark” with Yoshi from Nekrogoblikon providing the iconic keyboard riff. The highlight of their set was during their penultimate song, “Low Life,” where Brandon leaped on Chris’s shoulders and both continued to perform. Legendary rock n’roll behavior right there!

An air of foreboding preparation fell over the crowd after Crobot’s set. GWAR… is…coming. Security guards donned rain ponchos. Fans against the barricade grabbed their safety goggles and put their phones in Ziploc bags. Photographers wrapped their pricy lenses in saran wrap. I grabbed a pretzel.

After a short clip from the documentary This is GWAR, a masked ‘fan’ took center stage and started a chant of, “We want GWAR.” The audience joined him, until an AI-search-engine-mascot-squirrel named Raspy teased the audience, “Okay, if that’s what you want…” Then, GWAR emerged, and beheaded the ‘fan’ who became a fountain of spurting blood. Up and down, he bobbed his spewing cannon head to drench the fans head to toe. I hit the deck and covered my camera, but was laughing the hardest I’ve laughed all year.

From there, GWAR wreaked havoc and everything was fair game. Setlist staples included “Bring Back the Bomb” with Blöthar and Sawborg sharing a pint of brain blood from a scalped general, “Bored to Death” saw Blöthar spraying the crowd from his udders, “Saddam A Go-Go” featuring a fistfight between Bonesnapper and Vladimir Putin and ending with Bonesnapper dismembering Putin and skinning his barrel chest. That was only the first half hour. There were several beheadings, giant alt-Blöthar from a parallel dimension showed up and was duly decimated, angel wings and fake mustaches flew about the pit. Several politicians were satirized, including, but not limited to: Amy Coney-Barrett, Brett Kavanaugh, and Donald Trump. Crowd-surfers did handstands upon raised arms. Everything was blood-stained, even apple juice boxes, for some reason? Raspy, the smartass-AI-squirrel who was a pain in GWAR’s collective ass, came to life and was taxidermied. Pustulus announced he was polyamorous. Mass hysteria.

GWARoween was a tasteless, vile, immature, chaotic, gimmicky, gory abomination. We can’t wait for next year.