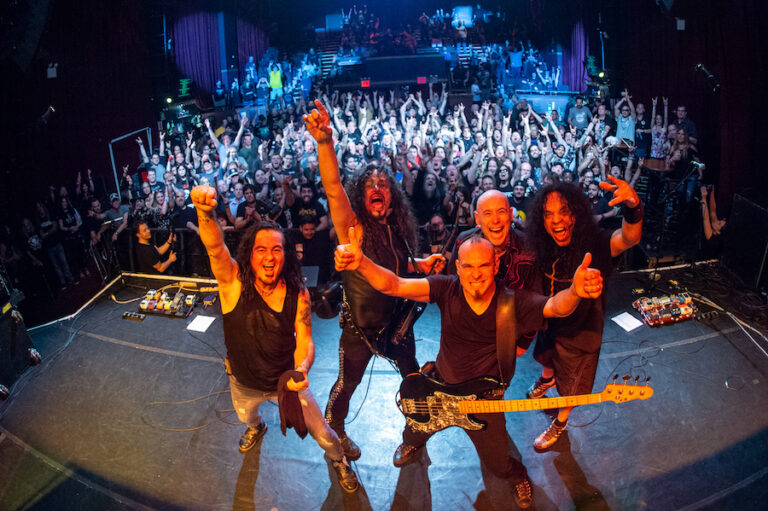 Armored Saint is on the road for the first time since the pandemic hit, and the eminent metalers have no plans of making it a short trip. The band, on tour supporting W.A.S.P. in America through mid-December, hope to conquer overseas audiences next year.

Stopping at the Wellmont Theater in Montclair on November 17 and The Paramount on November 18 is Armored Saint, a band who is putting on a show where fans (for the first time) will hear live renditions of songs from Punching the Sky, their latest, excellent effort. The pandemic stymied immediate touring for the album as to was released in late 2020. The hard-hitting collection features intense tunes and intelligent lyrics courtesy of singer John Bush, bassist Joey Vera, guitarists Phil Sandoval and Jeff Duncan, and drummer Gonzo Sandoval. Bush, Vera, and the Sandoval brothers are original members. Duncan joined Armored Saint following the tragic death of founding guitarist Dave Prichard in 1990 after a battle with leukemia.

Punching the Sky opener “Standing on the Shoulders of Giants” begins the proceedings with a Middle Eastern-style intro that builds to a galloping riff as Bush’s commanding vocals swoop in, and melodic solos abound backed by Vera’s inventive style and Gonzo Sandoval’s pummeling foundation. Additional highlights include the crashing power chords and Vera’s unique playing on “End of the Attention Span,” the heavy, headbanging “Do Wrong to None,” “Bark, No Bite,” which certainly has both, and “Unfair,” a track about the fleeting nature of a lifetime. Finally, the band closes on a high note with the blistering “Never You Fret.”

The tour is billed as W.A.S.P. 40 Years Live, but Armored Saint is also hitting the four-decade mark since its formation. The bands have shared the stage many times going back to the Los Angeles club scene in 1982. In 1985, they toured together with budding mega-stars Metallica. The shows are still spoken of in awe by those that were lucky enough to have attended.

Armored Saint released its debut album, March of the Saint, in 1984. The anthemic title track and classic numbers like “Can U Deliver” and “Stricken by Fate” immediately put the heavy metal world on notice. Sophomore effort Delirious Nomad continued the charge with stellar rockers like “Long Before I Die” and “In the Hole.” Raising Fear, recorded as a quartet following Phil Sandoval’s departure, further elevated Armored Saint as best in class. Check out “Chemical Euphoria,” “Human Vulture,” and a gritty cover of Lynyrd Skynyrd’s “Saturday Night Special” from that special time in their career/

Following Prichard’s death, the band returned with guitarist Sandoval back in tow. Symbol of Salvation then came as 1991’s monster of an album. It featured ragers like “Reign of Fire” and “Tribal Dance,” the poignant “Last Train Home,” which was dedicated to Prichard, and “Tainted Past,” which included Prichard’s guitar solo from his demo work on the album. This record is one with many high points from the band’s career. In 2021, Armored Saint released the CD/DVD, Symbol of Salvation: Live, that showcased the current lineup paying homage to the album on its 30th anniversary. (Armored Saint disbanded in 1992 after Bush joined Anthrax and reunited in 1999, but they’ve released four studio albums since that time. And for those looking to stock up on the band’s back catalog, take note: Armored Saint earlier this year released special digipack CDs and vinyl reissues of its first three albums.)

We recently spoke to John Bush just as this massive 40-year-anniversary tour was about to start, picking his brain about the run, the record, and the risks worth taking as a frontman.

Your first tour in three years kicks off in less than a week. How are you feeling?

I’m feeling good. I start getting a little weird anxiety before I leave to go on the road. It’s just my own trip and that is starting to develop a little bit. It usually subsides right when I get out there – I’m really fired up about the shows. There’s some really great ticket sales that are happening already. A lot of shows have sold out and I think there’s a lot of enthusiasm for seeing W.A.S.P. in particular because they haven’t played in so long and done a proper tour of the U.S. It’s exciting, too, for us to be playing some new songs because we didn’t tour for Punching the Sky at all. Just to get out there and play some new tunes of a record that we made that we were really fond of that we never performed live is going to be really cool.

Armored Saint played a livestream while you were forced off the road. How was that experience?

I don’t even know if you can justify that as a real show in all honesty, but it was fine. It was necessary because we had just put our record out and we wanted to do something because we weren’t going to play shows. It was like a strange combination of a rehearsal and a video. That’s kind of how I kind of interpreted it. It was still good to do and we were grateful for the fans that watched it… but, in any case, this will be us performing in front of humans for the first time since 2019.

You have performed with W.A.S.P. in the past, the last time more than 30 years ago. How did the tour come about?

When we were approached, it sounded like a great idea. We share some history together. We did that tour that everybody still talks about from 1985 that included Metallica, of course, and it was ours and W.A.S.P.’s first records and it was just a great package. We both started in LA around the same time – 1982. It’s their 40th anniversary and, for all intent and purposes, it’s ours. It’s going to be fun. Blackie [Lawless] has been really nice with dealing with some of the pre-tour logistics. He’s fired up and I think it’ll be a great show for old school fans and hopefully a lot of newbies, as well, maybe the offspring of the old school.

There’s a great amount of crossover between W.A.S.P. and Armored Saint fans. Still, do you think that you may be able to win over some of the audience that go to the shows specifically to see W.A.S.P.?

That would be nice. You always want to do that as a support act. I think Armored Saint means a lot to people. We’ve been pretty busy off and on for the most part for the past 10 years in America. The philosophy should be it’s a great tour and you get a really great bang for your buck.

Well, at that point we were all about 21, maybe 22-years-old. It was our first album and our second tour and the first time we had a bus. It was cool. We were just enthusiastic about being out there and played some great shows. There were a lot more hijinks than I’m doing at this point. My sole purpose out there is to have a great show and to sing well. It’s not to see much I can consume as far as alcohol or extracurricular activities. It’s just about staying healthy and giving the people a great show, that their money is well spent.

Regarding vocal health, how do you keep your voice in shape on tour after 40 years?

It’s always a challenge. Sleeping is imperative – that’s really the most important thing. This is a physical thing, it’s taxing. For all my peers in the metal world or any genre, the older you get, it’s harder. I just try to live a little bit more of an angelic life. For singing, hearing myself is really crucial. I use in-ears like most people these days. If not I run the risk that I won’t hear myself and over sing and mess my voice up.

It’s the 40th anniversary of the band forming. What do you feel when you reflect upon your longevity? What were your goals and ambitions starting out?

Our goal was to take over the world. That was everybody’s goal. I don’t think the longevity is something we could comprehend. When we were staring out we loved bands like The Who and The Stones and we were like, “We want to be around as long as them.” What’s funny is they’re still around! Longevity is a really key component.

You just can’t dictate your success. You can’t dictate your financial success in this business or your popularity, or even if you were lucky enough to get a lot of popularity that you’re going to sustain it. I think that’s something that you kind of have to let go of and I did that a long time ago. I try to approach things with a low expectation; not of myself and not of the quality of the music I make, because that’s the highest expectation. I think if you do that, though, if you achieve what you want as a writer or a musician, you can feel good and wherever it lands you can accept that. I can’t say that for everybody, but that’s how I do it because I don’t want to go, “Oh, that record didn’t do well, it wasn’t good.” No way! There’s plenty of records that were successful and that were amazing, and there’s plenty that were very successful that I think are garbage. I think it’s all about quality control of myself and the band and at being at the highest level at what I can do. I’m not saying I haven’t been disappointed – that’s an understatement. It doesn’t mean those records were inferior. So much is at play with timing and the music business and the people working with you and some breaks. It’s all that stuff.

This tour brings you through mid-December. Anything brewing yet for 2023 on the Armored Saint agenda?

We’re talking about doing a European tour in April but that’s not confirmed yet. We’re talking about going to Europe in the summer to do some festivals and that’s still being worked on.  We love Europe and Europe is a huge part of our fan base and success. We want to get there because we haven’t been there for a while, too. I’m even throwing it out there that we could do this W.A.S.P./Saint run again. That’s just my idea.

There’s just so many territories that we’re not playing and I listed 25 cities that we could probably go back to that we aren’t even hitting on this run. We’ve got to see how it all plays out and, of course, if Blackie would be on board with that. I’m even throwing it out there to go to other territories with them. Maybe South America, perhaps Australia and New Zealand, Japan. I think that would be amazing. It would be pretty stellar. Those are my lofty goals. We’ll see what happens.