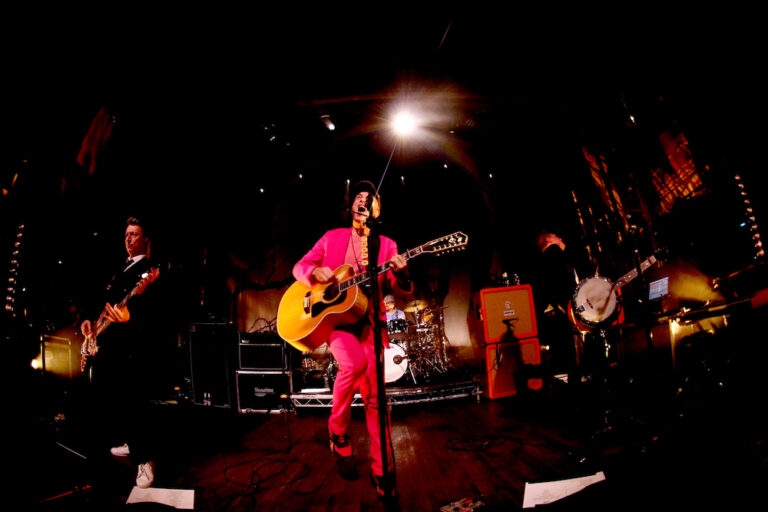 Last Tuesday, November 8, as the weather dropped into the forties again, Webster Hall filled up slowly, but as it did, the temperature rose along with it. It was the perfect setup for the triumphant return of Scottish band Travis whose NYC return came after nine long years. They took the stage in the club, after it was well warmed up with people and excitement, to perform their 2001 release and their third studio album, The Invisible Band, in its entirety to celebrate its 20th Anniversary. This special, timely tour that started almost a year ago ended the following night in Washington D.C., as well, so NYC lived it up.

As they took the stage, frontman Fran Healy recalled the band’s 2001 performance at Radio City Music Hall post-9/11 as a night they’d always remember. The band then went into the album’s opening track, “Sing,” where the audience sang with them on every note and matching every beat – almost as if no time has passed at all since that fateful show. This four-piece sounded as fresh and relevant as ever, and a beautiful backdrop and a moody light show added an extra touch to each song. Fans were brought into the story of each song as they went through the 12-track album and ended with the always moving “Humpty Dumpty Love Song.”

They left the stage after the main set before coming back to a roaring crowd and breaking into their hit, “Writing to Reach You,” noting a funny story about how the song rips off Oasis’ “Wonderwall” chord progression. Travis followed that with other great songs from their career, including “Driftwood,” “My Eyes,” “Closer,” “Turn,” and, of course, their most well-known track off their second album: “Why Does It Always Rain On Me?” Along with that came its mandatory crowd participation on the final verse.

A fantastic show, a small intimate venue, and a band that still has a lot to offer 30+ years into its career made for a great night.