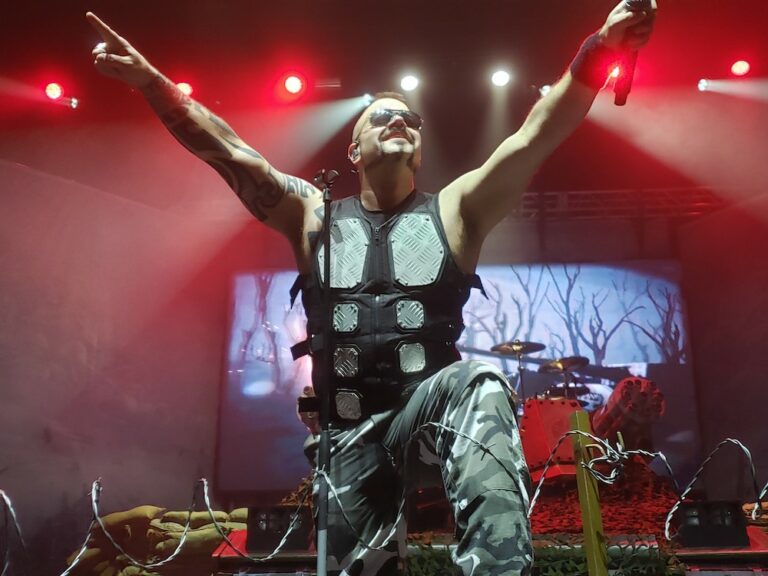 For the past 20 years or so, Sabaton and Epica have elevated heavy metal by introducing two qualities rarely found in that genre, sophistication and finesse. These strong points were evident as the two bands ended their North American Tour to End All Tours at Hammerstein Ballroom.

Epica is a Dutch symphonic metal band, founded in 2002 by vocalist/guitarist Mark Jansen. Lead vocalist Simone Simons sings most of the songs as a soprano and mezzo-soprano, while Jansen contributes the death-metal growls. The band has incorporated string orchestras and opera choirs into its compositions, yet contrasts the classical elements with djent transitions and power metal, progressive metal, thrash metal and groove metal arrangements. After releasing its eighth and most recent studio album, Omega, on February 26, 2021, Epica released a live album, Live at Paradiso, and a 20th anniversary box set, We Still Take You With Us – The Early Years, both on September 2. On November 11, Epica is scheduled to release a seven-song EP, The Alchemy Project, on which the band collaborated with many musicians of well-known bands.

Sabaton formed as a power metal band in 1999 in Falun, Sweden. Lead vocalist Joakim Brodén sings about historical events, mainly wars, and significant moments in these battles. The band’s 10th and most recent studio album, The War to End All Wars, released on March 4, focuses on the atrocities, miracles and heroic acts specific to World War I. On September 30, Sabaton also released an EP, Weapons of the Modern Age, the first part of a planned three-part trilogy titled Echoes of the Great War.

Epica opened on a stage partially set for Sabaton, in that the performance space was fringed with barbed wire. The nine-song set began with “Abyss of Time – Countdown to Singularity,” a song from the most current Epica album, in which Jansen repeatedly bellowed the start of a phrase and Simons’ flawless and feather-light vocals completed the phrase. With no recent product, the band’s repertoire did not focus on one album but rather featured songs from six albums. The performance was lively and entirely entertaining, with keyboardist Coen Janssen at one point impishly dancing around the other musicians while playing a curious keyboard that curved down in a semi-circle. For those listening more deeply, the influences of the band’s music were fascinating; the band closed with “Consign to Oblivion,” featuring lyrics inspired by the mystery of the Mayan civilization’s culture.

As the intermission drew to a close, Sabaton showed a short film paying tribute to the “doughboys,” American soldiers lost in World War I. The stage lights ignited and showed that in addition to the barbed wire along the stage’s edge, the drum riser was designed to look like it was sitting on a tank. The military aesthetic of the stage production instantly ushered the historical themes that would follow. The band members were at their stations, and as usual, Joakim Brodén came on stage wearing camouflage pants and a vest that looked like protective battle gear. Unlike Epica’s set, Sabaton’s visual impact was testosterone-driven.

The evening’s 18-song set launched with “Ghost Division” an aggressive moshing song about the armored division under the command of German lieutenant Erwin Rommel in his push into France during World War II. Except for Brodén’s hoarse vocals, the music was clean and melodic, yet fast and forceful enough to induce hair-spinning by some of the musicians. The second song, “Stormtroopers,” about the specialized soldiers of the German army who used sophisticated infiltration tactics to break the stalemate of the frontlines in World War I, was equally fast and furious. The set continued with epic-sounding arrangements, often led by crunching guitar leads and riffs, and orchestrated by layers of thick keyboard washes.

Sabaton’s audience was fully engaged, occasionally responding with fist-pumping chants when the songs lent themselves to this action. At one point, several audience members animated a song by collecting in the middle of a mosh pit and making rowing motions. Brodén asked the audience if they wanted to hear a song in English or Swedish, and responded appropriately when the majority of the audience cheered for Swedish.

As this concert was the final night of the tour, Epica joined Sabaton onstage during the encore of “Swedish Pagans.” Epica’s keyboardist, Coen Janssen, jokingly wore strips of duct tape on his bare chest to imitate Brodén’s wardrobe; Brodén’s ripped off some of the tape as he sang. The two bands together then covered AC/DC’s “Highway to Hell.”

With that, the audience soon went home, and so did the bands, back to the Netherlands and Sweden. The tour was done and finished. The bands will take a break and then begin working on new music.