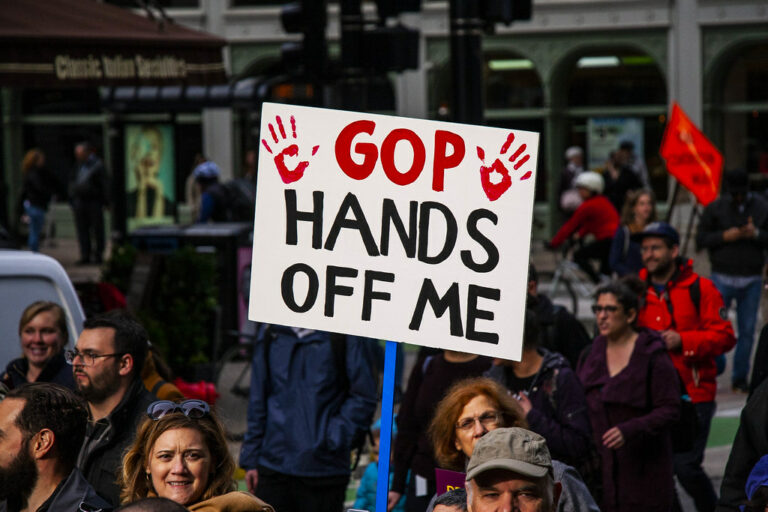 "Women's March for Reproductive Rights Chicago Illinois 5-20-19_0740" by www.cemillerphotography.com is licensed under CC BY-SA 2.0. To view a copy of this license, visit https://creativecommons.org/licenses/by-sa/2.0/?ref=openverse.

I love being right.

It doesn’t always happen, but when it does – and when it is for a measure I support – things are good around here. What I have been saying since the summer and the abhorrent Supreme Court Dobbs decision to strip 51% of the electorate’s rights with nothing but right-wing religious fanaticism and Republican fascism behind it, expunging abortion would be a losing argument in a general election for the Grand Old Party. And so, what by all historical perspective and economic reality should have been a strong Republican midterm election this month – the sadly misinformed were calling for a Red Wave – turned into the greatest first-midterm for a Democratic president in nearly a century. There is one reason for this… well, three reasons in total, but we will get to those in the coming weeks. This one is due to the overwhelming support for women’s reproductive rights and the fight to keep abortion legal.

By the time I am writing this the House Representatives still hasn’t been called for either party. That is a stunning sentence to digest for those in the know. Let me put it into perspective: When Barack Obama faced his first midterm elections in 2010, he had a similar low-40s approval rating and he lost 60 seats. Six-Oh! Biden will lose maybe 12, maybe less, and his party may still take the House. This is beyond shocking for politicos. This does not happen without a bizarre overreach impeachment (Clinton, 1998) or a war (Bush, 2004), and it would not have happened if not for the Dobbs decision to expunge nearly a half century of rights to women.

There have been a lot of post-mortems on the left and the right for this, pundits checking in on this and that, but I can assure you, January 6, the survival of democracy, shitty candidates, the Trump factor, and all that does not affect the outcome of any midterm the way Women’s Reproductive Rights did here. This is a dramatic shift in the electorate in mere months (Dobbs came down in June). Case in point, last November, Virginia, a solid blue state, elected a Republican governor just 10 months after the rightwing insurrection. That would not have happened this November. In fact, Midwest battleground states (all of which Donald Trump won to squeak his way into the presidency in 2016) went completely for Democratic candidates across the board – Michigan, Wisconsin, and Pennsylvania. In Michigan, like in Montana, California, Kentucky, and Vermont (joining Kansas this past summer), reproductive rights were on the ballot and it was a clean sweep.

Turns out there is no place in America where giving the government the right to jail women and their doctors for their healthcare decisions is popular. Exit polls suggest six out of 10 Americans support the Fourth Amendment and the right to privacy for all citizens – not just men. This is what saved the Democrats from total annihilation in congress and the senate. Period. Full stop.

Highest inflation in 40 years, spiking gas prices, a hemorrhaging housing market, and rise in crime should have guaranteed a slam dunk for the party out of power. Even if Republicans have no real answers for any of these issues, they are busy fighting; woke and mocking Nancy Pelosi’s husband and looking for Hunter Biden’s laptop. Even considering the backup quarterback theory – Try this guy! – none of this mattered. What mattered was the government taking control of women’s bodies.

In some states, like Pennsylvania, the number one issue for voters was reproductive rights, more than inflation or crime. Numbers from several states, many of them supposedly red, were in a similar vein. Even races where Republicans pulled out, they did so 10 to 15, and in some cases, 20 points less than expected or how they did previously. What was the difference? Reproductive rights.

There was a wave all right, and that wave was abortion.

What led to it?

Well, first off, of course, women. In almost every state in the union, new voter registrations for women were off the charts. We heard this during the summer when Dems rose in the polls and turned what looking like in May to be a bloodbath in the midterms into a blue comeback after the Dobbs decision, but then as the polls tightened from September into the final weeks of the election, that theme seemed to lose steam in the media. Many Republican voters, who were unimpressed with some of the weak candidates they were forced to vote for came home and began to show a closer race. But in the end, it was still the fear of government oppression that carried the day. It resonated far greater than economic concerns or really anything.

Lastly, before we cover this extensively in the next column, the youth vote (or Gen Z) came out like never before. It was the largest showing in 2020 of any 18-24 voting bloc, but the midterms surpassed it, and in an off-year election. Traditionally more people (especially young people) vote in presidential elections, not midterms. This one was different. Sure, climate change, gun violence, attacks on the LGBTQ+ community, and a general disregard for decency are major concerns for them, but exit polls show that 40% of them were pissed about the Dobbs decision and wanted to send a message, while also protecting those rights at the state level going forward – another prediction I made that came roaring into focus in this surprising midterm. Republicans have a youth problem, and the way they approach all those issues above, it does not look like this is going to abate when a new batch is eligible to vote in 2024.

But that is for the next column.

For now, I will take my little victory lap and hope that as we move forward, every state will have the reproductive rights issue on the ballot and end this madness. Because if it is still an issue (the new prohibition) then Republicans are not going to win many elections.