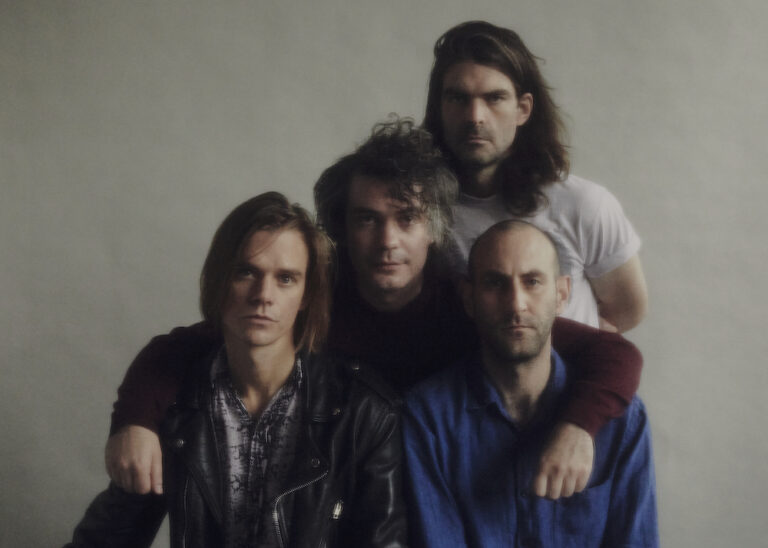 Preoccupations On Hometown Gigs, Covering New Ground, & Mixing It Up

Scott “Monty” Munro put a lot of work into the rebranding of his band, and although it paid off, it took a lot of work… work that resulted in a familiar sound, a similar style, and a new age darkness.

Four records and one decade in and Preoccupations have yet to shake the ‘art punk’ tagline. Sure, 10 years isn’t a lifetime in terms of rock bands, but for the music industry as a whole? That’s a good chunk of time and can showcase a myriad of growth. Preoccupations has grown, too, evolving into a band that knows trying new things and highlighting instrumentation is key. Arrangements, their latest effort out this past September, gives listeners new and old a taste of what digging into guitar work can result in. The record is a thumping blend of string-driven musicality and coarse, electric shredding. The four-piece have gone back to their sound from their debut, which was dark and subtly melodic, sharpened it just enough to feel fresh, and elevated it with the kind of musicianship a veteran band exudes. This fall they began taking these new songs and this revised – but still punk-y and avant garde – era to in-person audiences, with a stop at NYC’s Bowery Ballroom on November 18. (Tonight!)

The Aquarian sent a few questions Monty’s way to further feel out the synth-tickled Arrangements journey.

There is a wonderful rough-around-the-edges quality to your music, which adds to the authenticity of it all. How do you stay connected to your roots and maintain your originality as you not only grow in success, but create music in an already saturated market?

We’re just doing things the same way we’ve always done. We have a nicer studio than back in the old days, but the process is the same: get in the studio and write/record and then learn how to play the songs for tour. To be honest, I don’t feel like we’re trying to stay connected to our roots really? I don’t personally like it when bands keep doing the same thing and I like to think that we’re doing our best to mix things up with each new record as much as possible. Obviously, there’ll still be a thread between the records because it’s the same group and all that, but we’re never trying to repeat what we’ve done.

Something about Preoccupations that is intriguing to me is how out of your over 100,000 monthly listeners on Spotify alone, your biggest city for streams is not your home country, nor the U.S. – it’s London in Great Britain. Why, if you have any idea, do you think that community has embraced you so strongly?

We’ve definitely taken a bunch of cues from British bands of the seventies and eighties, so I think it sort of makes sense.

On the topic of cities, we cannot wait to see you tear up NYC on November 18. Is there anything specific about this Big Apple, Bowery Ballroom show that you’re all looking forward to?

Always a pleasure to play New York City and we love the Bowery! It’s our first proper headlining show in New York for awhile and our first since Danny has been living in New York, so with half of the band there it definitely feels like a bit of a hometown gig.

What was the self-releasing process like this time around? Arrangements in a new age of the band – did going a more DIY route do for you, the music, and this era?

It definitely was a lot more work! We hired some great folks to help with the rollout, though, and it’s been going really well! It’s been nice to have control over all the aspects of the release though and not have to worry about anyone’s opinion but ours.

“Advisor,” one of the new songs off Arrangements, is a seven-and-a-half-minute long tale of musicianship and balance – all of the band is highlighted at some point on this track and your noise rock meets metal sound comes through the more modern new wave stylings. Is this a favorite of the band’s as much as it’s a favorite of ours?

That song definitely took the longest to record. We recorded the second half fully twice because we didn’t quite get it the first time, which is rare for us. The first half has a bunch of experimentation with keyboards and stuff which I’m pretty proud of, plus some great cello playing from New York’s own Rashaad Jones.

What’s next for Preoccupations? There are albums out, single releases, name changes, tours underway… how do you hope to close out 2022 and kick off 2023?

Closing out 2022 is just finishing off this tour and then we have a couple months off for the holidays. Next year, we have a tour kicking off in Europe around the beginning of February that’s quite long but we’re covering some new ground there which is exciting. We have some more stuff for tours next year, nothing that can be announced yet though. We also have another record around half done, so we’ll hopefully have some more music to release in the next year or so! Stay tuned.

FOR DETAILS ON HOW & WHERE TO CATCH PREOCCUPATIONS ON TOUR, INCLUDING TONIGHT’S STOP IN NYC, CLICK HERE!