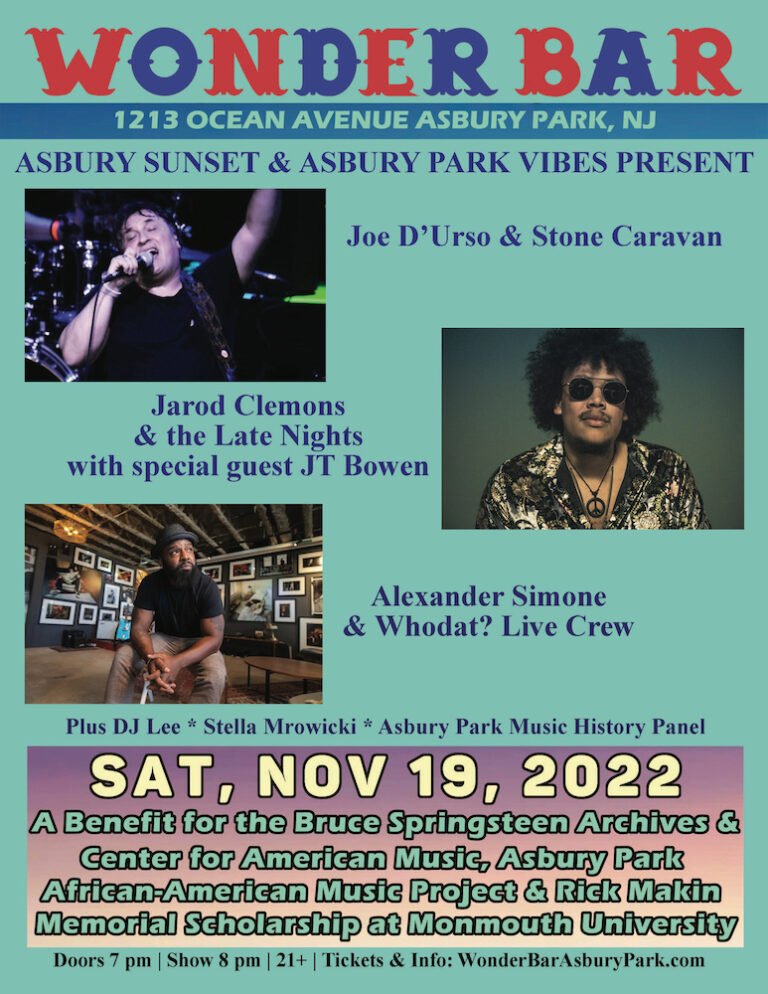 TICKETS NOW ON SALE AT TICKETMASTER FOR NOVEMBER 19 SHOW AT THE WONDER BAR!

The roots of Asbury Park’s historic music scene run miles and miles deep.  But the other aspect of Asbury that runs just as deep (if not deeper) is the community of creatives, artists and musicians who consistently support each other, as well as give back to the local nonprofits that are preserving the City’s heritage.

Whether you are an Asbury resident or visitor, a musician or music lover, a supporter of the arts or someone who adores Asbury Park … you will want to be at The Wonder Bar on Nov. 19 for The  Asbury Park Music History Fundraiser, which will give back to The Bruce Springsteen Archives & Center for American Music, The Asbury Park African-American Music Project, and The Rick Makin Memorial Scholarship at Monmouth University, presented by Asbury Sunset and Asbury Park Vibes.

This one-of-a-kind event will feature musicians whose blood courses through the veins of Asbury Park!

Joe D’Urso will bring his Jersey Shore Americana Rock N’ Roll to the Wonder Bar along with his Stone Caravan bandmates. The group will rock many tunes from 14 albums; their most recent being “Jersey Diner” from 2018, which features 11 original songs along with odes by Tom Waits, Harry Chapin and Bruce Springsteen.

D’Urso remains true to an ideal inspired by the late Harry Chapin: that it is essential to help the less fortunate. He spends a lot of his time working with The Light of Day Foundation, WhyHunger, Artists Against Hunger and Poverty, and the Dan Sullivan Foundation, which raises money for college scholarships and folks who have experienced medical hardships.

Jarod Clemons, son of late E Street Band saxophonist Clarence Clemons and accomplished choir vocalist Jacqelyn Monteau, will bring his fresh, modern-day take on blues-rock with his Late Nights Band. By honoring blues traditions and adding their contemporary rock ‘n’ roll stamp on it, Jarod Clemons & The Late Nights make the genre appealing and exciting to a whole new generation. Also featuring bassist Tom Devine, drummer Bobby Reilly, keyboardist Dan Hogan, and guitarist Alex Fuhring, the band bring their spirited, jam-tastic sound to every stage when they perform and will bring the house down with their new single, “Money.”

An added treat … famous soul and R&B singer JT Bowen will join Jarod and his band on stage for something really special! JT, who called Springwood Avenue his home, led the hot bands Soul Flame and The Chosen Few. In the latter band was future Rock and Roll Hall of Famer Clarence Clemons before he was the saxophonist of Bruce Springsteen & the E Street Band! JT also was the singer in Clarence Clemons & the Red Bank Rockers.

Alexander Simone & his Whodat? Live Crew will bring their “testimony” to the stage with a funky soulful rock that mandates your participation by dancing, clapping, singing along, and having the time of your life. Simone, grandson of American singer/songwriter/pianist/civil rights activist Nina Simone, and son of singer/songwriter/composer/Grammy nominee/Broadway star Lisa Simone, is a consummate performer with an uber-talented “crew” of musicians backing him. The band will share their most recent singles “Long Way to Go,” “Man Down,” and “Even Now.” Whodat? Live Crew includes vocalists Bryan Reeves and Kindra Graham, guitarist Jules Drucker, bassist Kevin Stryker, keyboardist Timothy McClain, and drummer Andrew Davis.

All Asbury Park music buffs, take note! There will be an Asbury Park Music History Panel moderated by Eileen Chapman, director of the Bruce Springsteen Archives & Center for American Music and a board trustee at Asbury Park Music Foundation. Many special guests will be there that evening to share their knowledge and stories about the rich history of Asbury Park’s most notable performers, venues, and creatives.

The mission of Asbury Park Music History Fundraiser is to support the following charities:

Longtime Asbury Park Press features and editorial page editor and community theater talent Rick Makin is remembered throughout the Jersey Shore as a kind, colorful Renaissance man, someone who could write, teach, sing, dance and act with great ability. He was the Panorama editor of the Asbury Park Press throughout the 1970s assigning stories, interviews and reviews as Bruce Springsteen rose from local artist to international superstar. Meanwhile under Makin’s leadership, the Press covered the Sounds of Asbury Park as it gained stature as an internationally recognized rock music scene.

Sadly, Rick Makin passed away in 2020 from complications of COVID. In his honor and to preserve his storied legacy, son Bob Makin (of Makin Waves fame) spearheaded the Rick Makin Memorial Scholarship for Humanities and Social Sciences at Monmouth University, which will be awarded to students of journalism, music, theater, literature, and history, all of which were Makin’s great passions.

“It’s an honor to be a part of this event and have my Pop remembered alongside the rich history of the Asbury Park music scene he respected, appreciated and covered as the features editor of the Asbury Park Press from 1972 to 1980. I’m also tickled to hear that Bob Santelli, who wrote for my Pop, has been named the executive director of the Bruce Springsteen Archives & Center for American Music. He and my Pop were my mentors. They taught me everything I know about music writing. And having hung out in AP since I was in the womb, it makes my heart soar to see the revival of the city’s resurgent West Side, thanks to the efforts of Asbury Park African-American Music Project. I wish my Pop could have seen it. He would have loved it too!” — Bob Makin

The mission of the Asbury Park African-American Music Project is to share the music, cultural heritage and stories of Springwood Avenue through oral histories, research, writing and programs; and develop accessible resources that reflect Asbury Park’s African-American music heritage for the City of Asbury Park and others to use as a basis for interpretive heritage projects. They also aim to address a lack of representation in traditional historic resources and give voice to the stories of Asbury Park’s African-American community and engage all who live in and visit Asbury Park in the active exploration, interpretation, understanding, and preservation of Asbury Park African-American cultural heritage. Another current project is to bring back The Turf Club, which is the last remaining structure that housed one of Springwood Avenue’s celebrated music spots. Their hope is to revitalize the space and transform it into a community venue for music and culture.

The Bruce Springsteen Archives & Center for American Music is currently the largest publicly accessible archive in the world devoted to Springsteen content, dating from 1927 to present. It serves the research and informational needs of Springsteen fans, educators, researchers, authors and others with a serious interest in Bruce Springsteen’s life, career, and American music history.

In addition to the archival mission, Bruce Springsteen Archives and Center for American Music creates traveling exhibits, educational conferences, public programs, teacher workshops, and scholastic field trips, all aimed at exploring the American music tradition and providing for academic discourse in various fields of American music. The Nov. 19 benefit will help raise funds for the Archives’ forthcoming building being constructed in Bruce’s hometown of Freehold.

Tickets for this incredible event are currently on sale at Ticketmaster and at The Stone Pony box office for $25. They are also available through the artists, Asbury Sunset, and Asbury Park Vibes. They will be $30 at the door. Doors open at 7 pm and the show begins promptly at 8. This is a 21+ show.

Many thanks to generous additional sponsors of this event which are Asbury Audio, MOGO Taco, Press Communications, New Jersey Stage, The Aquarian Weekly, The Penguin Rocks, Radio Jersey, Danny Coleman’s Rock on Radio, and Makin Waves.