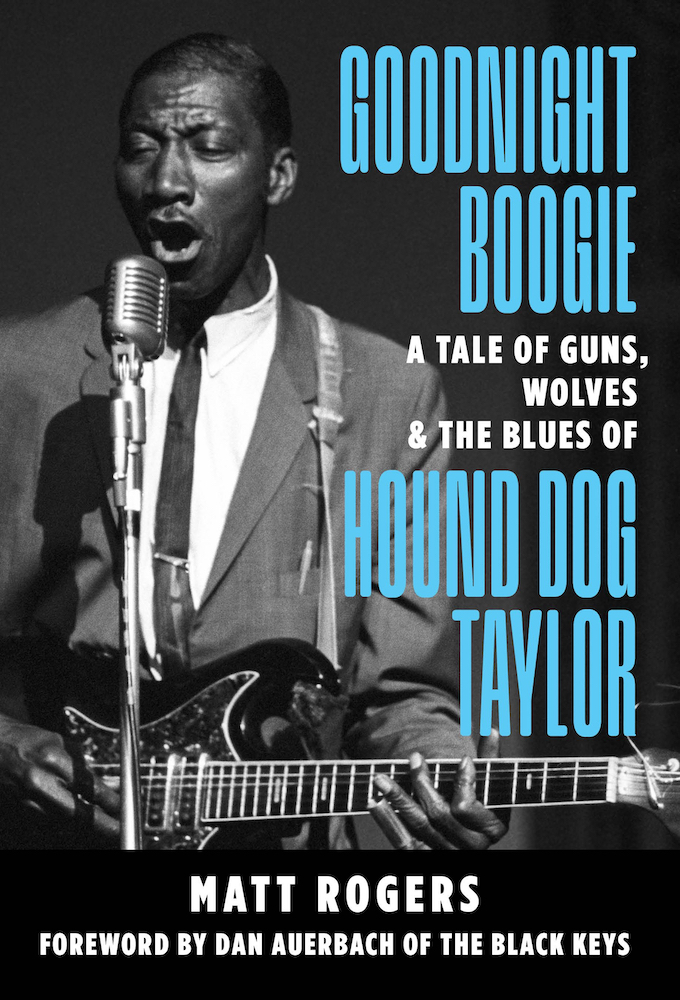 The self-titled 1971 debut of Hound Dog Taylor & The Houserockers was the first album put out by the legendary Chicago blues label Alligator Records. Taylor played punk blues/metal blues on a cheap Wal-Mart Japanese guitar. His band was two guys: second guitarist Brewer Phillips and drummer Ted Harvey. No bass? No problem. They bashed out the blues big-time like no band ever. Critic Bob Christgau once called them “The Ramones Of The Blues.” Writer Matt Rogers has done a fabulous job in researching and bringing to life this crazy ass rocker whose story reads like a great true crime novel or a movie with a helluva soundtrack. (Dan Auerbach of The Black Keys wrote the foreward).

Born in Mississippi, his father left when he was two. His step-father kicked him out of the house when he was nine. He moved in with his sister who had a piano in her living room. Born with six fingers on each hand, he became a piano man at first but had to haul the piano to gigs with a mule so that ended quick. When a gang of angry racist white guys with hoods over their faces burned a cross on his lawn – and came equipped with enough rope to Lynch him – he got the hell out of Mississippi, at first sleeping in drainage ditches until he hit the open road to Chicago.

It took him 23 years to find success. Using a piece of pipe as a slide, his sets were loud boisterous affairs, rock and rolling the blues into submission. He always played drunk as all hell. Even when he started touring under the tutelage of Alligator founder Bruce Iglauer, he hardly ate, stayed rail thin, and mostly consumed Canadian Club whiskey night-and-day while smoking his beloved Pall Mall cigarettes non-stop. All four or five of his sons (depending upon which woman you talk to) did prison time.

Functionally illiterate and besieged by nightmares of wolves chasing him, he had trouble with contracts and road signs. Iglauer, though, saw something in him, becoming his agent, producer, radio promo man, manager, and friend. Problem was, Taylor couldn’t get along with guitarist Phillips. Fueled by massive amounts of alcohol, word fights would escalate into fist flights and then into knife fights. Finally, in June of ’75, Taylor couldn’t take it anymore, went and got his rifle, and shot Phillips three times: in the leg, in the finger, and in the shoulder. Phillips was rushed to the hospital while Taylor was arrested and jailed for attempted murder. Months later, at 60, he’d be dead.

It was those damn Pall Malls.

A Pall Mall ad from back in the day proclaimed, “Guard against throat-scratch. Enjoy the smooth smoking of fine tobaccos.” As author Rogers writes, “But Taylor wasn’t guarded against throat-scratch, nor were his lungs spared disease. His decades-long habit, his lifetime in smoky bars, on fog-bound stages, in cloudy cars, sitting up late smoking the wolves away, had all grayed his insides, torched his lungs, and filled them with cancer.” Phillips went to visit him in the hospital where Taylor sheepishly apologized for shooting him three times. Apology accepted, and Phillips was a pallbearer at Taylor’s funeral.

Matt Rogers has brought to life this one-of-a-kind musician. His literary style is fast-paced, filled with celebrities of the blues that Taylor befriended. You can almost hear the wild cacophony of Taylor’s primal in-your-face style. It certainly makes one want to go back and hear his four Alligator albums.