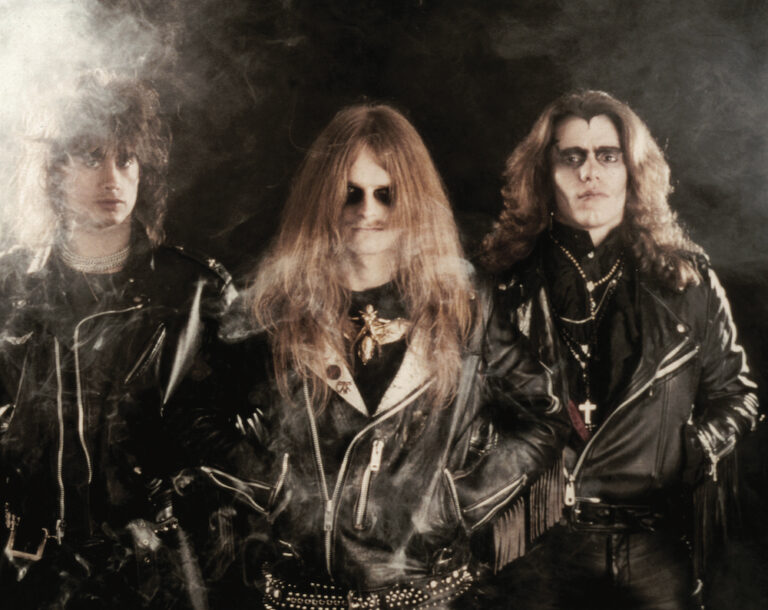 Some of the most artistic takes on heavy metal came from Celtic Frost, so paying our respects to them and their discography with an impressive, extensive boxset (and subsequent interview) are more than long overdue.

Influential Swiss extreme/experimental rockers Celtic Frost produced some of the most adventurous, bold, remarkable, and highly-respected heavy metal known to headbanger in the early to mid-1980s. Now fans can experience that era with the new Celtic Frost boxset, Danse Macabre, which dropped on November 25, one week ago, and covers the trio’s prolific output from 1984-1987.

The classic lineup during this time period featured singer-guitarist Tom G. Warrior, late bassist Martin Eric Ain, and drummer Reed St. Mark. Through Warrior’s unique use of guitar distortion, singular, harsh vocals, and songwriting partnership with the hugely talented Ain, and St. Mark’s furious drumming, Celtic Frost unwittingly blazed a path to several genres of metal. Their influence loomed large on the thrash, death, black, avant-garde, and industrial metal scenes. They appealed to the non-metal world, as well., with artists such as Foo Fighters frontman Dave Grohl and even his former Nirvana cohort Kurt Cobain having cited the band as favorites.

Amazingly, Celtic Frost showed an evolution through three short years that takes some bands a decade-long career to reach. The boxset showcases bonafide extreme metal classics like “Circle of the Tyrants,” “Morbid Tales,” “Procreation (Of the Wicked),” “Jewel Throne,” and “Dawn of Meggido.” The song “Danse Macabre” goes avant-garde with sound effects, percussion, and an incessant triangle ringing throughout the track.

Then there’s Celtic Frost’s legendary, experimental peak, “Into the Pandemonium.” Only Celtic Frost would dare open an album with a cover of Wall of Voodoo’s “Mexican Radio,” as they do here successfully. The record also includes tracks with strings and operatic female vocals (“Tristesses De La Lune”), the discordant percussion and strings of art-rock masterpiece “Rex Irae (Requiem),” as well as the infectious pure metal of “I Won’t Dance (The Elders’ Orient).”

The boxset version of Into the Pandemonium also boasts several non-album session tracks, including the highly sought after “In the Chapel in the Moonlight.” It also includes the albums “Morbid Tales,” “To Mega Therion,” and “Emperor’s Return,” and the 1984 “Grave Hill Bunker Rehearsals.” A 40-page booklet, poster, badge and patch round out the very impressive set.

What was your level of involvement with the Danse Macabre box set?

BMG in London owns the rights to the albums and they decided to do the boxset. They are a very professional company who cares what the artist thinks. They approached me and asked me to collaborate with them, which they don’t have to because they have all the rights, but they still did it. They enlisted me as an art director and asked me to do the concept for this boxset, which was an absolute honor. I’m very happy with what we jointly created

What would you say about how your songs sound remastered?

I love the remastered versions. What’s in the box set is based on the 2017 BMG remasters and to me personally those are the best sounding Celtic Frost releases ever. Remastered is not of course remixing. It’s existing recordings and you process them so they sound as good as they possibly can on modern devices. We were extremely respectful to the original recordings. We didn’t change anything. We just enhanced the sound to be even better.

Will you be touring to support Danse Macabre?

Not touring but we’ve been actually asked to play a festival in March in Texas (“Hell’s Heroes” in Houston), where Triptykon (Warrior’s post-Celtic Frost band) would play a concert paying tribute to the first two Celtic Frost albums, playing “Morbid Tales” and “To Mega Therion” in their entirety. We love the music and we agreed, so we’ll be coming over.

You always had a plan for the albums before writing a note or lyric, to the most minute detail. What fueled your conceptual ambitions and your breaking new ground in metal?

We didn’t know we were going to have a career in music. We were passionate about music but we didn’t know that we would actually succeed. I think our ambitions probably can be explained now looking back as a much more mature person, that was part of our love for other bands outside of heavy metal, who maybe approached music maybe more conceptually and artfully. For example, we loved [progressive] metal, we loved the new wave of the time – Siouxsie and the Banshees and all these bands who all had amazing concepts and amazing artwork. I think we wanted to be somewhere in-between.

We loved the power of metal but we also loved the artful approach and with Celtic Frost, the combination of that, it just screamed to be let out. It was very conceptual but at the same time we didn’t have the concept of becoming rock stars. We just wanted to play. We were so passionate about the power in this music that we wanted to enjoy it everyday.  We practiced everyday just to hear the distorted guitars. I speak as an adult who has had many years to analyze his youth. I think because of my rather problematic youth I was driven to very dark and evermore extreme music as a young teenager. I discovered more heavy music throughout the late seventies. I discovered Motorhead and UFO, and from there I discovered Discharge and Venom, then I stumbled upon the new wave of British heavy metal, which was the extreme heavy metal of the time.

Of course, one doesn’t stop there. I bought a guitar and tried to be as heavy as possible and I couldn’t help experimenting and trying to see if we could make this heavier. It took a few years for me to find my sound… and I actually use the exact same setup to this day. I love the heaviness of the guitar, that particular kind of distortion. It was a process of two or three years to finally stumble upon that.

It’s incredible how young you were. Looking back does it surprise you that you were able to evolve so quickly in three short years at such a young age?

It was actually (probably) that youth. When we formed Celtic Frost I was 20 years old and Martin was 16. We were totally addicted to heaviness and to extremity. We thought a lot about the band’s concept but we didn’t think about anything else. We just wanted to proceed.

You talk in the booklet about the new wave of British heavy metal and the rapid evolution there and its impact. That will likely never be repeated, nor will your progress and experimentation in three years. Tell us about growing up in that singular time period and how important an impact it had on you?

First heavy metal rejuvenated itself in the UK and completely changed our scene for the better. Then that wave crossed the Atlantic and then you had bands out of America and Canada coming in 1984, ’85, ’86. How could we not be swept up in this? Every day we would discover new and exciting singles and demos and new albums. Literally every time you went to the record store the guy would say we have new stuff from America. It is, of course, a privilege to have lived during that time.

How did you approach Into the Pandemonium, your creative and experimental landmark album?

We were striving to become better musicians with every record we did, starting with Hellmammer’s EP (pre-Celtic Frost band) and then the Morbid Tales album. We rehearsed maniacally every day and we wanted to become better musicians. Once we had achieved a certain level of technical proficiency we felt that the doors have been opened to be more adventurous and realize more ambitious ideas. Our influences were very wide-ranging. I loved classical music, Reed loved jazz music, Martin loved new age music, and we all listened to all of these styles constantly when we were hanging around together. We wanted to see what it sounds like if you combined the heaviness of metal with all these more artful influences. That’s really what gave us the idea to do an album like Pandemonium.

What do you recall about your first tours in America?

We loved it, of course. We came from a provincial area in Switzerland and Switzerland at the time didn’t really have a music scene. And then we were flown over and played to the audiences that we had heard about, that we had read about. The American metal wave was in full swing with bands like Exodus and Megadeth and Slayer. We played with them. We met the American audience. It was such a privilege to break out of this little provincial village and to play in America. It was an experience that shaped us for life.

There were plenty of ups and downs between yourself and Martin but you were able to turn these bumps in the road into successes. How would you characterize your relationship?

Martin and I were of immeasurable importance to each other, not just for Celtic Frost but for the entire course of our lives. We were friends right up to Martin’s death, and, actually, the last meeting I had with him was two weeks before his death and we spoke about that very topic. We talked about our many differences that we had but we both agreed that at the end of the day we always managed to do something creative with those differences, and, at the end of the day, something arose from them. I don’t think I would be who I am now as a musician over 40 years later and I don’t think Martin would have lived his creative life without me. We really owe everything to each other

Martin and I both always owe everything to people finally giving our music a chance after our initial years where we were just in the underground and nobody took us seriously. They gave our music a chance, and we never forgot about that.

FOR MORE DETAILS ON THE DANSE MACABRE BOXSET, INCLUDING PURCHASING, CLICK HERE!