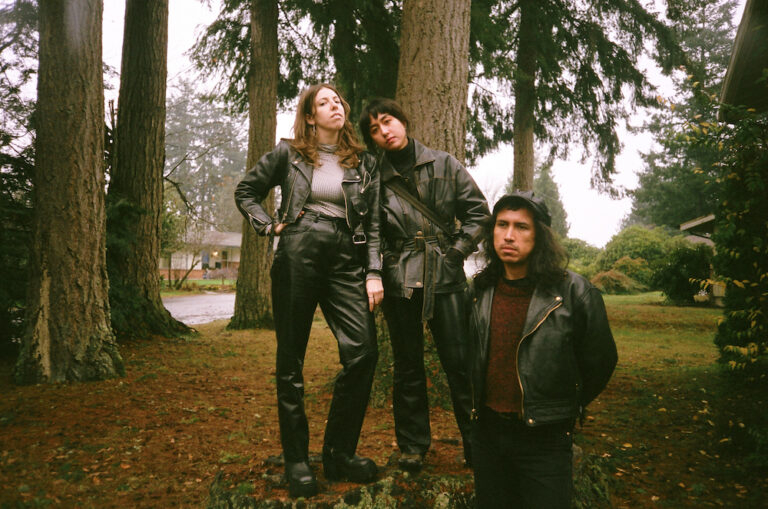 The indie rock scene may be struggling right now, but rock trio Ribbon Stage are bringing their punk ethos center stage with their new LP Hit With The Most.

Ribbon Stage has that early lo-fi sound of the sixties rock scene down to a tee. However, they make it fresh and original by meshing it with a bit of nineties grunge nostalgia.

Their first full length hasn’t been out too long. Titled Hit With The Most, the record is an expansion of their debut EP, My Favorite Shrine, with its collection of punk rock tunes hovering just over the two minute mark. “We created the majority of the songs as building blocks… where most of them start with guitar with the structure, chords, and melody. Then we added drums, bass, and vocals. We didn’t get together to write anything until the week we were recording. We didn’t have a preconceived theme or anything. We had the songs we were working on, but they take on such an added shape. There’s a foundation, for me, personally, that’s emotional of what I’m going through or what I’m thinking about. Everything is pretty organic. We recorded it in our basement in Olympia in a week. There were some more songs that didn’t make the cut.”

The band listens to just about everything, making their influences vast, but they all have a heart for the DIY scene first. It can’t help but be a favorite of theirs as new members to the community themselves. “We listened to Gram Parsons and Strawberry Switchblade. Anything indie, guitar rock, or country – we are drawn to anything that is DIY stuff, but we have a wide range of tastes,” explains Jolie.

During the rehearsals for Hit With The Most, the band ended up having dinner with classic emo rockers Jawbreaker. “Jawbreaker was over Jolie’s basement hanging out. We had a lot of California energy that night. We went over the bassist’s house and his house was covered in squirrels, which I was one of the coolest things I saw in Olympia,” says Hilator.

“The bassist lives in Olympia. Even though those guys are from a totally different generation, we had a lot in common. It was fun having similar references even with the age gap. Bikini Kill are also a band that is that extension of DIY punk,” Jolie states.

Their first and only show post pandemic was actually opening for Bikini Kill at Pier 17 back in July. “It was a cool bucket-list-life-is-insane-and-very-psychedelic experience that was scary and cool,” shares Jolie. “We could see the Statue of Liberty as the sun was setting as we were surrounded by water on the rooftop.”

“It was a lot of fun,” adds Hilator. “A lot of younger people came to talk to us after the show who were probably huge Bikini Kill fans. It was great talking to them because many have not heard of us before.”

Hit With The Most is the band’s new baby and part of this new chapter. They tell us that their favorite track so far is “Hearst.”

“I did like writing the song ‘Hearst.’ It’s such a great punk track and I’m a pretty rudimentary player and so often my parts have two parts, but this one has three,” says Jolie.

The trio found a home on Olympia, Washington’s K Records and have yet to break the mainstream, but they seem alright with being where they are now. “There’s not a lot of resources for a smaller band like ours. Finding an audience and algorithm and finding a way to connect to fans because we haven’t played live is a challenge. We are lucky we have our own scene,” admits Jolie. “We do have a lot of support coming from the underground scene that supports the DIY scene. There’s a lot that rely on these big tech companies like Spotify. Despite our own connections who are genuine music lovers in the industry, we necessarily don’t have a lot coverage from a more institutional side of things. Being on this legacy indie label connect us with people who already like it. It’s difficult finding an audience outside of that though as the music industry is not all that inviting.”

Ribbon Stage’s bond is undeniable from their sense of humor to their political vantage point – both sprinkled into the music. This helps the band create something higher than simple art and bigger than simple friendship. They’re a family of bandmates whose hearts and minds are on display. Jolie says, “We definitely have our senses of humor. Everyone in the band is really funny. We all love shopping. We all have cool tastes in clothes and shoes. We all love so many cool types of music. We have similar values on how we we interpret current events, analyze politics, and how we can also riff and razz on what’s going on [fundamentally].”

Hilator draws the conversation to a close by adding, “We all come from different backgrounds. We all are different ages. We value each other and have admiration for one another. We are all family at this point. Creating music together seems very natural.”

FOR MORE INFORMATION ON RIBBON STAGE, CHECK OUT THEIR INSTAGRAM! FIND THEIR MUSIC ON ALL DSPS NOW!