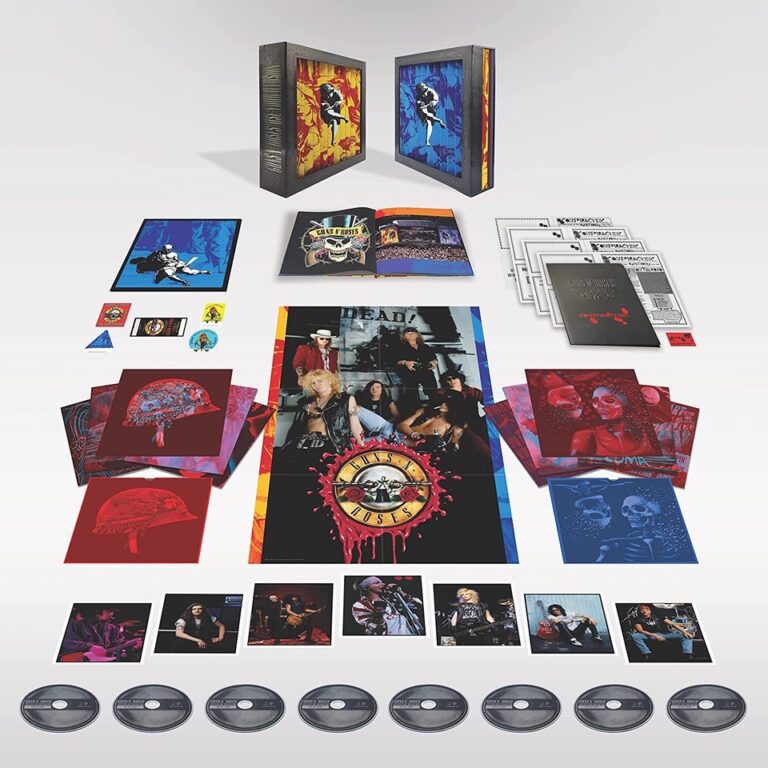 Guns N’ Roses released Use Your Illusion I and II, their third and fourth albums, simultaneously, on September 17, 1991. They’re not the only act to have employed this two-at-once approach, which is ostensibly designed to offer alternatives to fans who might be put off by the price of a double LP. Bruce Springsteen, Tom Waits, Elvis Costello, and others have tried the same thing, but nobody has achieved quite as much success with this gambit as the Los Angeles–based Guns N’ Roses, most of whose fans turned out to have no interest in choosing one of the records over the other.

Within about three weeks of their release, the albums occupied the top two positions on Billboard’s Hot 100 list. They stayed on the chart for more than two years and have together sold more than 35 million copies – enough to keep the band well-supplied with royalties during the 17 years that passed before their next record of original material.

Use Your Illusion I and Use Your Illusion II – which between them offer 30 tracks and more than two and a half hours of bluesy hard rock – make a big statement, but it pales alongside a new “super deluxe” edition, which features an enormous amount of content (and an enormous price to match). The set includes seven CDs, with a playing time of nearly seven-and-a-half hours, plus a Blu-ray disc, a hardcover book, and enough posters, lithographs, photos, and other collectibles to decorate a good-sized room.

The CDs include remastered versions of the two original albums, plus a pair of full-length concert recordings, one from New York’s Ritz Theatre in May 1991 and one from Las Vegas’s Thomas & Mack Center the following January. The Big Apple show is also featured on the Blu-ray, which is not widescreen but does offer pristine high-definition surround sound.

Two caveats before we discuss the good stuff. First, like the original albums, this “super deluxe” release is rather bloated and uneven, and all but the most fanatical fans are bound to want to skip some tracks because they’re musically below par, misogynistic, or both. Guns N’ Roses’ worst moments, such as heavy-handed rockers like “Pretty Tied Up” and “Right Next Door to Hell,” can sound like outtakes from the Sex Pistols.

Also, particularly given how much this package does include, it’s surprising that it embraces no studio outtakes and omits some Paris, London, and Rio de Janeiro concert material that’s on new two-CD “deluxe” editions of Use Your Illusion I and II. If you want everything, in other words, you must pony up for both “deluxe” and “super deluxe” releases, which means you’ll be paying twice for the remastered original albums.

That said, there’s a lot to like – and a fair amount to love – in the big box. The studio version of the anthemic nine-minute “November Rain” has been newly augmented by an orchestra and sounds better than ever, and the original albums also offer such highlights as the ballad “Don’t You Cry,” and the guitar-driven “Civil War” and “Estranged.”

If you’re a fan, though, you probably already have the 1991 LPs and will be more interested in the 47 concert tracks, all but four of which are previously unreleased. They include strong versions of such numbers as “November Rain”; Bob Dylan’s “Knockin’ on Heaven’s Door”; “Sweet Child o’ Mine,” which singer Axl Rose wrote for his future (and now ex-) wife, Erin Everly; and the ballad “Patience,” which opens in this live rendition with a snippet from Rod Stewart’s “I Was Only Joking.” The concerts also sprinkle in truncated covers of such numbers as Alice Cooper’s “Only Women Bleed,” the Rolling Stones’ “Wild Horses,” the Eagles’ “Hotel California,” Jimi Hendrix’s “Voodoo Child (Slight Return),” and “Sail Away Sweet Sister,” from Queen, a group Rose has called his favorite.

In his best moments, Rose sings up a storm and is a compelling stage presence. And the rest of the band is on fire, particularly lead guitarist Slash, whose frequently stunning work here marks him as one of hard rock’s best guitarists.

The Jimi Hendrix Experience, Los Angeles Forum, April 26, 1969. More than half a century after Jimi Hendrix’s death, the folks managing his estate are still overseeing the release of previously unheard material. That’s amazing, but it’s perhaps more amazing that even now, they don’t appear to be scraping the bottom of the barrel – at least not judging by LPs like this one.

The well-recorded album (available on CD, vinyl, and digitally) preserves a sold-out concert with Experience bandmates Mitch Mitchell on drums and Billy Cox on bass. It has been mixed from the original eight-track tapes by longtime Hendrix engineer Eddie Kramer and comes with extensive liner notes by ZZ Top’s Billy Gibbons, who attended the Forum show, and L.A. Times critic Randy Lewis.

The 80-minute concert draws material from all three of the trio’s studio albums, including Are You Experienced? (forceful versions of “Purple Haze,” “Foxey Lady,” and “I Don’t Live Today”), Axis: Bold as Love (a midtempo “Spanish Castle Magic”), and Electric Ladyland (a lengthy two-part “Voodoo Child (Slight Return),” which bookends a reading of Cream’s “Sunshine of Your Love”). Also in the set: an early example of Hendrix’s soon-to-be-famous reworking of “The Star-Spangled Banner”; “Tax Free,” an instrumental he learned from a Swedish duo who shared a bill with him in Stockholm; and the guitarist’s bluesy “Red House,” which is now included on CD copies of Are You Experienced? but at the time had not been released in the U.S. Throughout, the guitar pyrotechnics range only from excellent to astonishing.

Amy Ray, If It All Goes South. Georgia native Amy Ray may always be best known for the Indigo Girls, the still-extant duo she co-founded in 1985 with Emily Saliers. Since 2001, however, she has also released 10 solo albums, the latest of which equals anything she has done with the group. The CD – which features such guest artists as Brandi Carlisle and the trio I’m With Her – was recorded live to tape and came together in just nine days. Prior to those sessions, though, Ray must have spent a lot of time crafting the musically diverse music and richly detailed, highly personal lyrics.

Highlights of the set include “Tear It Down,” which addresses racial prejudice in the South; a reworking of the Indigo Girls’ “They Won’t Have Me”; and “From This Room,” which appears to be addressed to Ray’s gay listeners. (“You’re not alone,” she sings, “and it ain’t no crime.”) The best track, though, is the anthemic and clearly heartfelt “Subway,” which is dedicated to the late DJ Rita Houston, who championed the Indigo Girls. In the number, which refers to Houston as “the maverick queen of our galaxy,” Ray movingly recounts her own early days in the music business in New York. It’s the kind of song that makes you want to crank up the volume and listen three or four times in a row.

James Houlahan, Beyond the Borders. This sixth album from Los Angeles–based singer-songwriter James Houlahan is the first I’ve heard from the folk-rocker since his 2016 sophomore release, Multitudes. That CD was excellent, but Beyond the Borders evidences significant growth. Coproduced by Houlahan and frequent cohort Fernando Perdomo, the album delivers a dozen self-penned numbers plus a likable acoustic cover of Neil Young’s “Powderfinger.”

Among the catchy and richly detailed originals here: “Lonesome Love,” which features guest violinist Scarlet Rivera; “Through the Water,” which was inspired by Ingmar Bergman’s 1961 film, Through a Glass Darkly; and the introspective album opener, “Far from Me,” which sounds redolent of Guy Clark.

Eddie and the Hot Rods, The Singles 1976–85. Eddie and the Hot Rods, a pub rock band from the U.K. that gave a voice to alienated teenagers, never made much of a mark in the States. In England, however, the group (which broke up in 1985, reunited in 1996, and continues to perform today) played a key role in the burgeoning punk/new wave movement. This 40-track, two-CD anthology includes the A and B sides of every single the Hot Rods issued during their peak early years. The fast-paced recordings variously recall the Ramones, Ducks Deluxe, Dr. Feelgood, and the Flamin’ Groovies.

The program, which incorporates 11 concert tracks, includes the band’s biggest hit, “Do Anything You Wanna Do,” and the also-popular “Teenage Depression.” In addition, you’ll find lots of high-energy covers of 1960s classics, such as Sam the Sham’s “Wooly Bully,” Question Mark and the Mysterians’ “96 Tears,” Sam Cooke’s “Shake,” and a medley of Van Morrison’s “Gloria” and the Rolling Stones’ “I Can’t Get No Satisfaction.” There’s nothing profound or extraordinarily original here but the music is consistently high-spirited, hard-rocking, and easy to like.

Louis Armstrong, Louis Wishes You a Cool Yule. Jazz great Louis Armstrong never released a Christmas album during his lifetime, but he did issue holiday songs, most of which have now been collected on this 11-track CD, which incorporates six singles from the 1950s. Among the highlights are Armstrong’s gravelly voiced, trumpet-spiced version of “Christmas Night in Harlem” and two Irving Berlin classics, “White Christmas” and “I’ve Got My Love to Keep Me Warm,” the latter a duet with Ella Fitzgerald.

Also here are Satchmo’s previously unreleased recitation of the poem “A Visit from St. Nicholas” (aka “The Night Before Christmas”), with newly recorded piano accompaniment, and his 1967 reading of “What a Wonderful World,” which became a U.S. hit – and his signature song – upon its rerelease in 1988. Granted, this last number has nothing particular to do with the holiday; still, you’re bound to have a “cool yule” with it playing in the background.