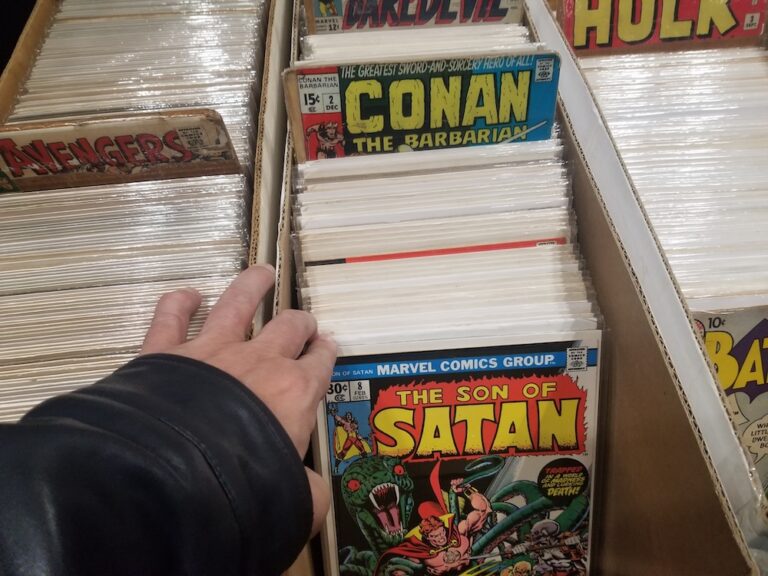 We cover NYCC annually, and not only because it’s a fun entertainment event, but because you never know who you’ll see. And this year we caught everyone from Chuck D. of Public Enemy to multi-hyphenate actress Mindy Kaling.

Every year when I tell people I’m going to attend New York Comic Con, I inevitably get someone asking me, “Are you going to dress up?” I don’t. Not that I have a problem with cosplay – some of the outfits are spectacular and take months to create. (This year, Eddie Munson from Stranger Things was popular.) I’m still amazed that comic book and geek culture has gotten as big as it has in the 21st century; whereas when I was a kid in the eighties, it wasn’t nearly as cool. Somehow, though, the whole event is associated (by some) with childishness or Halloween dress-up. I think of it as being in touch with your inner child. And what’s wrong with that?

For me, New York Comic Con is an annual ritual because, on top of wanting to go through vintage horror comics for my collection, I attend panels, interview movie and TV personalities, and connect with a lot of industry friends who I only see at this time of year. Both the inner kid and the professional journo get satisfied.

The post-COVID landscape for New York Comic Con has been different. Last year, the attendance was reported at around 150,000, down from 260,000 in 2019, but that was by design because of COVID regulations. This year, attendance was back up to 200,000 which is pretty healthy. It might not have looked like that when one was walking through the floor, at least on Thursday and Friday, because a couple of the main aisles were widened for more walking space. From what I understand, other parts of the floor were expanded for vendors and a new five-story building on the north side of the Jacob Javits Convention Center that allowed most panels and screenings to be held there. While the main stage still exists in the main building, pretty much everything else beyond the vendors and Artists Alley is held in this new facility, which eases the burden of the human traffic jam that can take over the convention floor on Saturdays and Sundays. I’m glad for that as it made it easier to navigate the dozens of rows of vendors. That also explains why, with a still robust attendance, one didn’t feel smashed in among the masses.

There were some notable absences this year. For the second year in a row, DC Comics and Dark Horse Comics did not have a presence on the floor. Other than perhaps the panels, movie studios and television networks did not have as many interactive or immersive exhibits as they normally do. And my favorite retailer, New Jersey’s Zapp Comics – with whom I spend the most money on their great back issue deals – opted out for the first time ever. My heart was sad and my wallet remained heavy… at least the latter was good for my bank account. Hopefully they’ll be back next year.

However, there were plenty of vendors and booths that were busy: the perpetual line for new Funko toys, the crowd clamoring for Marvel giveaways, people consistently diving into old comic book bins for deals, and a long line for a signing by Cobra Kai co-star Martin Kove (not to mention all the celebs signing downstairs like Michael J. Fox, Ralph Macchio, and Sebastian Stan). The new Empire Stage room, which holds approximately 3,000 people, was generally full for the bigger panels. I give props to the emcee for the event for keeping the nerd humor going and keeping the crowds pumped between presentations. He must have been hoarse by the end of the four-day weekend.

Many of the panels were quite entertaining, including the one for Good Omens which featured author Neil Gaiman and cast members along with a cheeky video skit from stars Michael Sheen, David Tennant, and Jon Hamm. We got a three-to-four-minute sneak peek at the forthcoming Muppets Mayhem show, and it looks legit funny. The “Weird Al” Yankovic movie panel included co-stars Daniel Radcliffe and Evan Rachel Wood, director Eric Appel, and Yankovic brought in via remote feed. It’s clear they all loved creating the fictional biopic (which I’ve seen, so I know it has some hilarious moments). There was also the Star Trek: Picard Q&A featuring the long-awaited onstage reunion of the Next Generation cast who are in the series. Unexpectedly, Marina Sirtis unleashed some off-the-cuff remarks, making fun of Patrick Stewart at one point (it was hard to tell if she was totally kidding) and also exclaiming, “We’ve signed so many NDAs we feel like one of Trump’s mistresses.”

One thing I have noticed is that more of the talent that shows up for panels and roundtables at NYCC now fall onto the television side of things. That’s fine since we have been living through what I feel is the true Golden Age Of Television, but hopefully there will be more cinematic talent returning to the Con next year. I feel like many people have been missing that over the last couple of years.

On a personal note, the highlight for me was taking my friend Donna Keegan –  director, producer, and former stuntwoman – to the Jamie Lee Curtis panel that was moderated on Saturday night by Drew Barrymore. Donna did Jamie Lee’s stunts for nearly 20 years, and near the end of the panel the famed actor made Donna stand up and announced to everybody that she was the one who did all the wild stunts in True Lies and made her look amazing. This proclamation drew hearty applause, and many young people came up to Donna afterwards for photos and selfies for which she happily obliged. Jamie showed a lot of class in acknowledging Donna before a large crowd – many other actors would not have done that.

Another NYCC highlight for me was the Yellowjackets party on Saturday night in which the forest from the popular Showtime show was recreated in the River Pavilion lobby. It led to an “outdoor” setting reminiscent of the show where people partied it up. (I had too good of a time and lamented my hangover the next day.)

Overall, I still get a kick out of Comic Con. The kid in me is always going to enjoy scoping out the aisles, interacting with new talent in the journalism world, and staying plugged into pop culture. Hopefully next year we’re going to see an increase again in A-list movie talent, have a couple of key comics players return, and see the return of my beloved Zapp. I was wondering what attendance would be like in these unpredictable COVID times, but the faithful keep showing up every year.