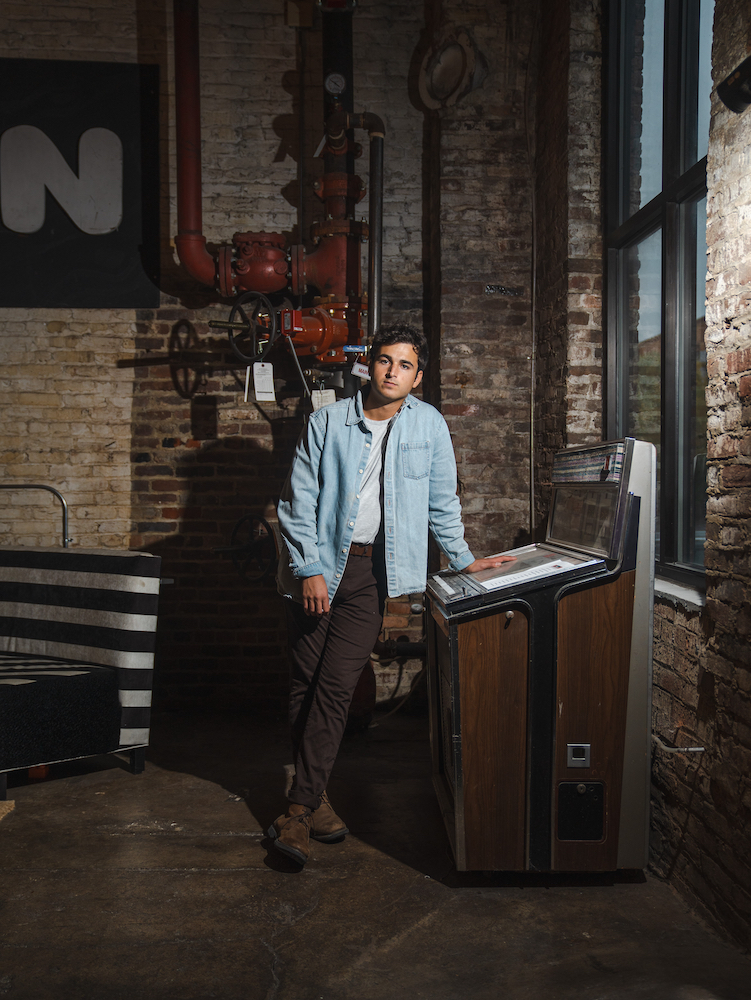 The Storyteller You Hope to Stumble Upon: NJ’s Own Sam MacPherson

“I think, for me, songwriting is always going to come first – not just because it’s the seed that everything else grows from, but because it’s something I love to do.” Sam MacPherson is an East Coaster, a Garden State native, and a lyricist in the purest form. When hopping on a call with him, you can feel his honest-to-God appreciation for creating, writing, and expressing.

On the topic of putting pen to paper to bring an idea to life musically, MacPherson goes on to say that he appreciates The Aquarian recognizing his “listenability,” because he works hard to create that within these personal pieces. “I think a lot of my songs are pop songs in their structure, in their DNA. They have a verse and a pre-chorus and a chorus and a verse, then a repeating chorus, and sometimes a bridge, which is very mathematically a pop song. By doing that and kind of sticking to that script when I can, it allows me the freedom to tell a story how I want to tell it, lyrically, otherwise.” He makes this state and his worldwide fanbase proud in the way he shares himself through melody, harmony, and artistry. We couldn’t wait to tell him exactly that, as well as tap into just how and why he gets so intimate in his songs.

You have a show at House of Independents coming up on Thursday, December 22. What is it going to be like coming home during the holidays, playing to essentially your first fans, close friends, and family?

It’s going to be pretty surreal. This is my first ever headline show and the fact that it’ll be in my hometown and I’ll be surrounded by family and friends, and it’ll be around the holidays is kind of the perfect storm of meaningfulness for me. It’ll be a lot of fun. I’m having a hard time conceptualizing that it’s actually happening, but I’m very excited.

The show is sold out on top of that, so that must really add something in you – almost like a pressure, but in a good way.

Definitely. I pretty much don’t do things well when there is no pressure, so that is like my perfect, ideal night. I’m really excited. There is a lot of pressure, but I think it’ll be a lot of fun and there’ll be a lot of people there that have known me for a while, so it’ll be cool to see them all there. A lot of people that are coming – [people] that I have that I’ve known almost all of my life – have never seen me in this way, too. They know me from completely different contexts, so it’ll be interesting.

[…] We’re kind of just finishing up a fall run of shows where you play for a lot of people and you meet a lot of new people. Some of those people knew my music, which was very humbling and exciting and inspiring. It was great to meet all of them and it was exciting to play for all of them every single night, but I think when you’re first starting out, everyone’s first rung on the ladder of things that they’re inspired by or things that they’re looking forward to do is playing a hometown show – playing for the people that have supported them from the very beginning before they had anything really going on, or, for me, really had any idea of what I was in store for. It’ll be a very nice, full circle moment for me.

How special is that? I definitely can’t wait to hit up that show and be in the moment for that. When you’re writing these songs and putting such heart into them, do you ever feel like it’s almost too raw? It’s almost too real and too personal to be sharing with the masses in such a soul-baring sense?

Sure. There definitely is a certain type of inherent exposure, personal exposure, in releasing music or writing music as I try to. In terms of the vulnerability of it, I think when I’m writing and I start seeing the caution tape in terms of, “I’m getting a little bit nervous, I’m revealing too much, I’m getting too close to the chest of this subject material,” I feel like that’s when I know that I’m probably doing the right thing. I think any writing that I do that kind of stops short of that doesn’t really, usually when I listen back doesn’t really check my boxes. That’s probably a product of people that I listened to growing up and the music that I’m a lifelong fan of: people that are amazing storytellers, people that are much better storytellers than I. That’s really the type of writing that I aspire to because I think that is the type of writing that brings you closer to the people that might find your music or stumble upon it or listen to it.

The perfect word is vulnerability and I think that plays right into your success, because as immersive and in depth as it all is, it all comes down to what’s coming from you, from your heart, from your past and present. This is what allows people to connect to you, to the songs.

I think you said it perfectly. I think that’s obviously at the forefront of my mind when I’m writing – relatable. Definitely the majority of the mission statement is just trying to be very honest, whether that’s in a blunt way or a roundabout way. That is always the goal.

And it turns out very well. You’ve had such an immense growth fairly quickly online, but as you mentioned, this is going to be your first headline show here at House of Independents. At the same time, you do have millions and millions of streams of songs. It’s an interesting dichotomy of having such a grand online presence with your music and then having this show being one of your first really big ones. You live in this beautiful bubble that you’ve created for yourself that gives yourself the room to branch out and  share new moments with the fans from a distance, comfortably, but then come out to share it with them. I commend you for being able to balance that and grow organically.

Thank you. I think about that a lot. Especially on the tour this fall, I thought about what any or all of the metrics mean and how those materialize into people coming for shows. Because I think a lot of artists probably feel the same in that you see numbers and you see statistics and analytics and you don’t really know what that looks like in human interpersonal form until you play a show and you see someone singing your songs and you’re like, “Oh, that’s not just a number. Those are real people that are listening, that are present.” I think that’s been the coolest and most meaningful thing to me. Playing the show in Asbury, I’ll be seeing a lot of people that, for the most part, maybe have never seen me play live but have heard my songs. It’s kind of like you don’t really need an introduction to someone. You already know them and they kind of already know you so you have this common ground to stand on. Meeting people at these shows and actually talking to them afterwards and really getting to know them is what kind of just completes the circuit for me and makes it all that much more special and all that much more worth it.

CHECK OUT SAM’S WEBSITE FOR DETAILS ON UPCOMING SHOWS AND NEW RELEASES!