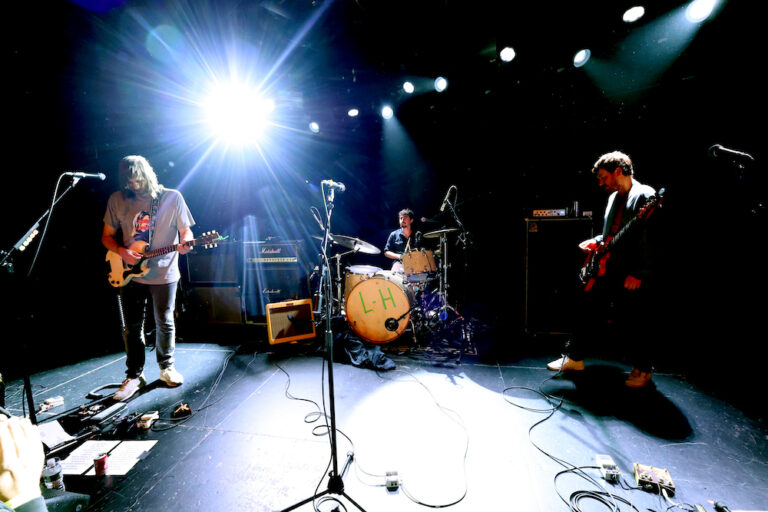 The Lemonheads formed as an alternative rock band in 1986 in Boston, Massachusetts, and achieved mainstream success in 1992 with the album It’s a Shame About Ray. Over the years, the band has performed the album in its entirety many times, often with different personnel since vocalist/guitarist Evan Dando has been the band’s only constant member. Now celebrating the 30th anniversary of the album, Dando is again touring the album, currently with bassist Farley Glavin and drummer Lee Falco.

After several successful albums, the Lemonheads took a hiatus in 1997 and Dando launched a solo career. Dando recruited new musicians and rebranded the band name in 2005. In 2006, the Lemonheads released its sole album of post-reunion music, followed later by two albums of cover songs. As such, the Lemonheads would not tour this year on new songs.

At (le) Poisson Rouge, the audience first enjoyed a solo set by Juliana Hatfield, who had been the Lemonheads’ bassist from 1991 to 1992, and On Being an Angel, a Hatfield-sounding band from Texas. The Lemonheads followed with a lengthy set, playing 19 songs before getting to It’s a Shame About Ray. This preliminary set featured songs from both Lemonheads and Dando albums as well as cover songs, and ended with Dando performing five songs solo. With no intermission, the rhythm section rejoined Dando on stage to begin It’s a Shame About Ray.

The album play-through saw Hatfield rejoining the Lemonheads for three songs, “It’s a Shame About Ray,” “Rudderless,” and “My Drug Buddy.” Then, the band mysteriously interrupted the album set with covers of the Ramones’ “Here Today, Gone Tomorrow” and Eyes’ “TAQN.” Dando performed the “Frank Mills” solo. The album replay ended with Simon & Garfunkel’s “Mrs. Robinson,” which had been added to later reissues of It’s a Shame About Rayand became one of the Lemonheads’ biggest hit songs. For this song, Dando sang while playing drums with Glavin on guitar and Falco on bass. The concert ended with “Streets of Baltimore,” a Tompall and the Glaser Brothers cover, again with Dando on drums, Glavin on guitar, and Falco on bass.

No new songs would be introduced, yet the show did not necessarily feel like the band was retreading its glory days. Straddling alt-country, alt-rock, grunge, and pop punk with low-fi sound, the Lemonheads drilled through the songs quickly and powerfully with hardly any pause between songs. Where the band was weakest was Dando’s vocals. His range was narrow and flattened the delivery of many of the songs. His vocals sounded best on his solo songs, perhaps because he did not have to push as hard on those songs.

A fair amount of the audience helped Dando by singing along. The whopping 35-song performance energetically gave the middle-aged audience a compelling reason to bop along endlessly to its college playlist. Ultimately, however, the Lemonheads will remain known as a nineties band until Dando and company produce new music that equals the impact of It’s a Shame About Ray.