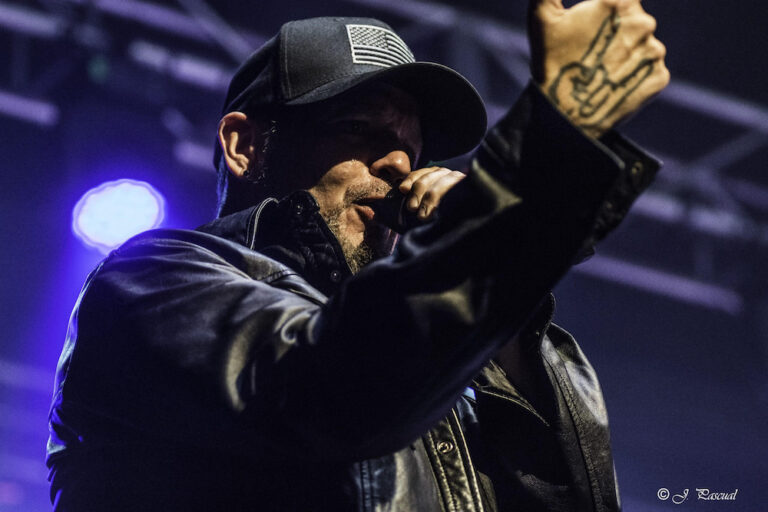 Ripper Does What He Does Best on ‘Return to Death Row’

All it took was 22 minutes and 36 seconds for Tim Owens to solidify the power of his pure metal musicianship. His voice is no joke, but the Ripper is more than that… damn straight.

Tim “Ripper” Owens, known for his incredible, high-pitched vocal screams, and overall singing ability, has played with more than a dozen. He’s the current singer for former Judas Priest guitarist K.K. Downing’s KK’s Priest, and sang for Judas Priest alongside a host of others including The Three Tremors, Beyond Fear, Iced Earth, and Yngwie Malmsteen. The man with the golden pipes is, rightfully, in high demand.

Now, Owens is flying his own banner for the first time in 13 years. Last month, he dropped a solo EP. The record, Return to Death Row, has been released under the name Ripper. It’s Owens’ baby this time around and that baby is going to grow up to be one heck of a headbanger. Featuring the vocalist’s aggressive, multi-octave range, as well as fierce, whiplash-inducing, razor-sharp guitars and a propulsive, battering ram rhythmic foundation, Return to Death Row is an outstanding slab of blistering metal. It will leave fans clamoring for a full length (Good news on that later!). The mini-album was co-produced by Hatebreed singer Jamey Jasta and Nick Bellmore, whom Owens cited as major contributors to the record.

We recently spoke to the affable, no airs singer on several subjects.

What influenced your decision to record a solo album at this time?

I’d done one in the past called Play My Game (2009) and it was more straightforward metal, but Jamey Jasta has been trying to get me to do something like this for ten years now. He loved the Judas Priest Jugulator stuff and he loved my Beyond Fear stuff and was like, “Man, we got to capitalize on that and make it a little heavier and straightforward metal, and add the influences that you’ve had in your career.” It just was never the right time. When he put out the Dee Snider records that he produced, I really loved them. I thought they were so good. Then I did his podcast to promote the KK’s Priest record and he’s like, “Let’s do that record we’ve always talked about.” It’s the 25 year anniversary of Jugulator so it’s a good time and we started working on it.

They had some songs written and started sending me ideas. Some I wrote along with them. The majority of the writing was with Jamey and the guys. They were such good songs. Even if I had the right ideas or sang to them, it came together so quick that they would just send them to me and I’d sing them in my studio and it was easy – really easy – stuff.

You’ve worked in so many bands that it must be nice to come back home to record under your name.

It is. Since I’d released Play My Game under Tim “Ripper” Owens, I thought with this one we’d just go under Ripper and do a little bit of a rebranding. It’s always nice, especially when it’s as good as this one is. The production is great, the songs are great, my voice was in top form and it was fun in the studio.

Your signature scream is in full effect on Return to Death Row. Does it get harder or easier to achieve that with age?

I went through a few years where my voice wasn’t there and I couldn’t understand why. I go to the gym every day. I really don’t drink much. Right now, the past 10 months, my voice has just been as good as it’s ever been and my high notes are extremely good. I’m in my mid-fifties. Being a singer, you never know… things can just happen to your voice without a reason. I don’t go out and party. When I tour really I go from the hotel to the venue and the venue back to the hotel. Right know the screams are really easy, and it’s funny because it’s not even the favorite part of my singing. The favorite part of my voice is the mid-range heaviness – when I have that style that’s just heavy and straightforward. My screams are my least favorite things to do even though they’re the easiest and the thing people like me to do the most. I like to sing in characters. I like to sing mellow. I did a song for somebody for Jesus Christ Superstar a while back. I love to just sing and not be penciled in singing one way. I like to sing in all different styles.

The album is very aggressive.  The opening track, “Die While We’re Alive,” literally roars out of the gate.

It was the first one I recorded. When they sent it to me it was, “Hell yeah! This is fantastic, add that right off the bat.” Then you add an infamous high note Ripper scream, and it’s kind of a long note and proves the point right away. It’s always good to open albums up with stuff like that. Bands have done that for years. I did that with Beyond Fear with “Scream Machine” right out of the gate. It was a perfect song. The good thing about this record is that it’s heavy, has thrash elements, and has heavy metal elements. Vocally, it’s all straightforward and melodic. That chorus in “Die While We’re Alive” is melodic, catchy, and great. I think that’s the best part that comes across.

When you grow up like I did loving Anthrax and Dio and Priest and Metal Church and Savatage and Testament and Death Angel, I had all that [in mind] and vocally I can sing anything thrown at me – or at least try to sing whatever they throw at me. I can sing death metal undertones. Obviously not as good as the real death metal singers, but I can do that. I can do hardcore, classic metal, hard rock. We try to put all those on the record even though it’s so heavy.

“Return to Death Row” is a great bookend to the album. It really ends the EP like it came in on “Die While We’re Alive.”

It does, and it’s got that little nod in the middle when it has the slow part where the phone rings and he answers the phone, to the original “Death Row” from the Jugulator record. It’s a great ending song.  If you do a full, ten-song record, you can have more flavors, more light and dark versatility. With this one we just wanted to come out and smack people in the face. We do have songs like “Silent Cage,” and that’s the mellowest song on there, and “Embattled,” which is kind of in-between. “Heroes Dare” is probably my favorite song on [the EP], but we did really want to come out and be pretty aggressive with this.

Do you plan on a follow-up, full-length album?

I just finished up the KK’s Priest record. When it comes to touring these next few years, KK’s Priest is going to be my number one priority. But the guys are writing now, so I imagine whenever it’s time we’ll release an album. This EP was important and the next record is going to be just as important to go out, so I imagine that’ll come together pretty fast once we start working on it.

Your work ethic is very strong in terms of the massive breadth and depth of your work.

I’m lucky I can do this. I’m actually getting ready to write a song for somebody right now. I do a lot of vocal guest appearances. When COVID hit I had to figure out what to do, so I did tons of guest appearances on people’s records. If somebody wants to get a hold of me to guest on their records it’s rippervocals@gmail.com!

When I have downtime it’s fun to just sit there and work on people’s songs. It’s what I do for a living. If you sell cars you don’t just sell one color and one style of car. Luckily, I love singing, I’m good at it, and people like me to guest on their records. I do stuff all the time. I just put out a record with a band called Pyramid that’s a heavy, progressive metal record. I wrote a lot of songs for it. The Three Tremors, that’s one of my main things, for sure, but KKs Priest is really the main thing. Next is going to be the Ripper solo stuff.  I know Ken wants to get out there. The goal is to get the new record out and then tour. I’m ready to do whatever he wants to do.

RETURN TO DEATH ROW, THE NEW RIPPER EP, IS OUT WHEREVER YOU LISTEN TO MUSIC!