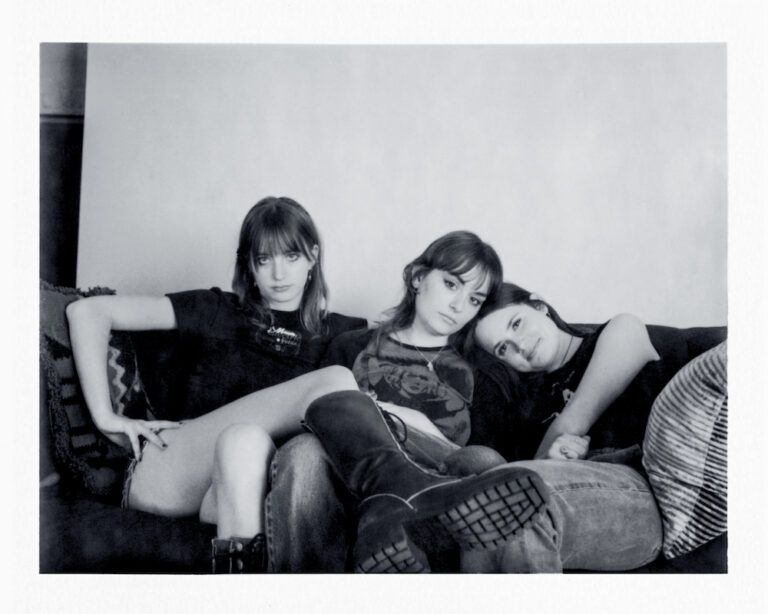 What do Heart’s Ann Wilson, Letters to Cleo’s Kay Hanley, and Radiohead’s Thom Yorke have in common? Other than talent, not a lot. However, if you threw the three of them in a blender, out would come the deliciously talented HELLO MARY.

HELLO MARY consists of drummer/backup vocalist Stella Wave, bassist Mikaela Oppenheimer, and vocalist/guitarist Helena Straight – an all-female rock trio vying for your attention. The band takes a page from the early nineties with their grunge-era-inspired EP, Ginger, released in 2020.

A young, brave, and brazen trio from Brooklyn, HELLO MARY already sound like they were ripped straight out of the pages of Rolling Stone, but they claim that there’s more work to be done. “We have grown in our confidence since the Ginger EP. We have a print and online interview[s] in magazine[s]. It’s crazy. We just want to tour now.”

Singer Helena Straight continues this sentiment adding that her and her bandmates “have only been on one-week tours” so far. “We played a few shows in California. We played The Roxy. Traveling is fun.”

The band is gearing up to captivate the ear of the public with their new self-titled album due in March. It’s a record that continues the dark underground rock aesthetic that has missing in today’s pop culture scene. This, importantly, adds to how fresh it will sound. Two of the members of the band are still so young they have to work around their school schedule. “Mikaela and Helena are both in school. We must go around that schedule for now. We are hopefully going on tour after the new record comes out,” shares Wave, the backbone, beat-keeper of the band.

She adds that HELLO MARY’s original plan was to release two EPs following Ginger, but humbly brags that “it became a full length because it was a logistical decision… and we signed to record label. We also write songs quickly.”

When it came to the recording process for the new record, the women worked with producer Bryce Goggin, best known for working with rock bands like Pavement and The Ramones. “He’s so fatherly and kind. It was a great time in the studio,” says Straight. “He has a dog named Sonny and all three of us are dog lovers. It made the mixing process even more fun.”

Wave concurs. “He is a cool producer to have, has cool creative ideas, and listens to the songs and sees how they can be elevated to the next level.”

The band’s sound is a prominent one and can’t be mistaken for anything else that is out on the radio now. “We always thought our sound would change – and it especially [has] since our EP. Radiohead, Big Thief, and Alex G. are some artists that we listen to that helped shape the new album. Those artists are all in our top three for 2022,” explains Straight.

When it came time to shoot the videos for the pair of their new singles, “Evicted” and “Looking Right Into the Sun,” off their upcoming full length, the trio picked director Abbie Jones to come up with a couple of lo-fi features. Straight tells us that they worked with her on the Evicted video and” just kind of followed her lead on it.” Oppenheimer did admit the process was a two-way street between the women in the band and the woman behind the camera; “Sometimes we give her ideas but sometimes she gives us ideas.”

This March-releasing LP sees the band growing in their confidence as they explained, which is why it is appropriately self-titled.

“Ginger was written before Stella became a solid part of the band. This new album is much more collaborative. We all write different songs and has changed the sound and the process in a great way,” Straight disclosed warmly.

The album’s artwork does follow in the creative footsteps that the band had from their Ginger EP, though. “We were looking around at different artists. Mikaela introduced us to this incredible artist for the artwork,” comments Wave. “We were looking around for a long time and we liked her painting,” says guitarist Oppenheimer, which led to the result being a lush blue and green brushstroke that the artist painted.

HELLO MARY, as an all-woman trio, gives credit where credit is due. They do believe that people are more open-minded today with women in rock. “In 2022, I think we are super different from other female bands,” confesses Straight. “People are more accepting today and believe in what we are doing.”

Their drummer agrees, telling The Aquarian, “I love that we are all women. It doesn’t define us but it’s easier now because people are a bit more knowledgeable now. Momma and beabadoobee are good examples of women in rock and roll who are doing their thing.”

The world may be quick to compare HELLO MARY’s sound to other bands and brush them off saying that they are replicating the nineties grunge sound and nothing more, but these ladies are wholly original and loving what they do. They draw inspiration from the style of art they are a fan of and they make it strong like the New Yorkers they are. Helena Straight says, “I read a comment that we are trying to sound like Nirvana, but are failing. I don’t mind those comments, but the Gen-Xers might have a bias by implying that we are trying to do this thing that they were a part of. I guess everyone is entitled to their own opinions.”