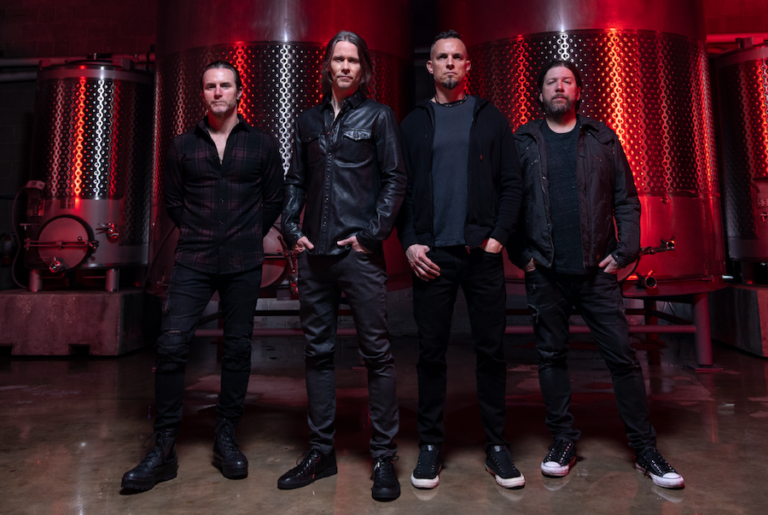 One month from today, Alter Bridge return to rock Jersey with a new record under their belts… a record that we reviewed as being able to clearly “inspire a new generation of metal bands and punk rockers.”

During the rock era, there have been numerous American artists who were first embraced by British audiences before finding acceptance at home. The Jimi Hendrix Experience, Twisted Sister, and Black Stone Cherry quickly come to mind. The latest artist experiencing this distinction: Alter Bridge. Although, that should perhaps come with an asterisk. The Orlando, Florida quartet were formed from the ashes of nineties megastars Creed and they have regularly filled theaters across the U.S. Throughout their recent European tour, however, they’ve performed in sold-out arenas. And, while the U.S. rock record industry remains sluggish at best, Alter Bridge’s five most recent albums, including the new Pawns & Kings, have debuted in the U.K. Top 10.

Don’t fret. The band will be touring here soon with two area stops: The Wellmont Theater in Montclair, New Jersey on February 1 and The Paramount in Huntington, Long Island on February 2. Mammoth WVH are their special guests.

The band’s previous album, the amazing Walk the Sky, should have spawned numerous hits, but was an unfortunate victim of the pandemic and prematurely faded. With COVID-19 mostly in the rearview mirror, however, that will no longer be an issue… if guitarist Mark Tremonti and frontman Myles Kennedy can maintain their stamina.

Tremonti and Kennedy are the definition of workaholics. In addition to his work with Alter Bridge, Tremonti fronts his namesake, a pure metal band, has authored a novel, and recently released an album of Frank Sinatra covers. (Yes, the guitarist and surprisingly versatile vocalist recently got together with the surviving members of Sinatra’s orchestra to record Tremonti Sings Sinatra.) Through his “Take a Chance for Charity,” the album and resulting live performances will benefit the National Down Syndrome Society. The guitarist’s beautiful young daughter Stella was born with such. In addition to writing, recording and touring with Alter Bridge, Kennedy recently released an excellent solo album, The Ides of March, and is a member of Slash Featuring Myles Kennedy and The Conspirators, whose own album last year, 4, charted in an array of countries.

How does the band’s members manage such a busy schedule and find the time to create yet another potential-classic album? Tremonti recently spoke with The Aquarian to help us figure that out.

When you and I last spoke for The Aquarian in September 2019, I asked if you were a workaholic. You can no longer deny it.

[Laughs] I do everything I can. I love creating music. This work is my passion.

How did the Tremonti Sings Sinatra project happen? It was a bit surprising coming from the former guitarist of Creed, who is a currently member of both Alter Bridge and Tremonti.

I’ve been a Frank Sinatra fan my whole life. Just over three years ago, I did the deep dive. Just like when I was a younger, I heard someone play the guitar and decide I wanted to play just like that, I decided I wanted to sing like Sinatra. My voice fit his range, so I studied it like crazy. I didn’t know what I was going to do with it until my daughter was born with Down Syndrome. I had read books about Frank Sinatra’s philanthropy and how he raised over a billion dollars for charity. So, I decided it was meant to be. I went ahead, created the record, and now I’m raising money and awareness for Down syndrome.

Although you front the band Tremonti, you’re not known as a crooner. How did you become confident enough to record the album?

I practiced nonstop and felt really good about it. When I initially thought of the idea, I told my manager that I was going to find local musicians to do it. He said, “No. My guitar teacher, Dan McIntyre, toured with Frank Sinatra. Let’s use his real band.” We set up a meeting with Dan and Sinatra’s bandleader Mike Smith. They asked my manager if I could sing [like Sinatra] and he said, “Of course,” without ever having heard me sing [like Sinatra] before. [Laughs] We put a band together using as many surviving Sinatra band members as we could and went into the studio to record just two songs. We had such a great time, we ended up doing 14 tunes.

One of the many outstanding tracks on Alter Bridges new Pawns & Kings is “Holiday.” Are the band’s members subconsciously suggesting it’s time to take a break?

[Laughs] No breathers allowed! During the past two years, the world had a big breather thanks to COVID, so it’s time to get back on stage.

I am exhausted just thinking about all the projects you and Myles Kennedy have in addition to Alter Bridge.

In addition to the interviews for Pawn & Kings and preparing for Alter Bridge’s upcoming tour, I have a Sinatra performance tomorrow night. Whenever I have a show coming up, I get nervous about people coughing around me. I have one more day to get comfortable about getting out in the public.

Pawns & Kings is yet another Alter Bridge album containing numerous potential hits. When do you and Myles find the time to collaborate on new songs?

Myles and I write all the time – we just do it separately. A few months before we record, we create demos, turn them into sharable files we can all listen to, and then add our feedback. We share our ideas and, by the time we hit the studio for preproduction, we’re pretty well versed in how we’re gonna attack the material. Technology makes it easier to consistently work and keep going for a couple of years before hitting the studio.

The songs are so detailed and so layered that it seems impossible to be the result of sharing computer files among yourselves.

That’s what the band is for. [Laughs] Myles and I are the writers, but when pre-production begins, everyone has the opportunity to put his spin on things, suggest we add different layers. When I write, I don’t tell Myles, “Here’s your guitar part.” We create our own parts. Everyone has free rein to do whatever they want to over the music. That’s how we get that Alter Bridge sound. It is not until we each add our part that our identity comes out.

This album certainly has its heavier moments. “This is War,” for instance, would not be out of place on a Tremonti album.

People have been saying this is our heaviest record, but we didn’t head into the recording process with that mindset. We just like to write songs that are going to be enjoyable to play night after night. Sometimes those are aggressive songs.

Is Pawns & Kings a concept album? Do the songs share a common theme?

No. Each song has its own meaning. “This Is War” is about the war going on within your own mind. On the other hand, there are other songs that lend themselves to what’s going on in the world today, like “Dead Among The Living” and “Last Man Standing.” But those songs were written before the [Ukrainian] war began, so it’s just coincidence.

In a sense, the entire planet is at war. Besides actual armed conflict, there are pandemics, global warming, and other strife. It’s one way to interpret much of the album’s lyrics.

That is what’s great about lyrics: they can mean something different to each person. That is why I don’t often get into the meaning. Doing that could ruin certain songs for people. I think it’s best when the lyrics are abstract and vague.

When do Alter Bridge have time to rehearse?

We just have to learn stuff at home. We’ll get together in Europe five or six days before the tour starts and rehearse as a band and get the production in order: the lights, the video streams, and all the cues.

We have two U.S. tours planned and, if things go well, we will do a third later in the year. We’ve been working really hard on breaking in America like we have in Europe.

Is it possible to “break” in America today like artists used to during the nineties and before?

Having Mammoth WVH as support on tour must be special for you. Wolfgang Van Halen is a former member of Tremonti.

Absolutely. It’s great to see his journey. When we first started hanging out, he was a shy kid, but crazy talented at everything he put his mind to. He’s intelligent and driven and he wasn’t meant to be the bass player in a band. He’s meant to be the frontman of his own thing. I’m glad to see that it happened. I’m glad he’s got the confidence and he put the work in. And I am so happy to see that the world has embraced him the way they have.

He was an important member of Tremonti.

He was an awesome member, but he deserved more of the spotlight. He was killing it on bass, but on his record, he’s playing drums, bass, guitar, and singing. He is amazing.

Is there any chance of an end-of-show jam with the other artists on the tour?

I hope so. I talked to Myles about getting the band members up there to do something. Whatever it is, it will be special.

ALTER BRIDGE COMES TO THE WELLMONT THEATER IN MONTCLAIR, NJ ON FEBRUARY 1! FOR TICKETS AND TOUR INFO, CLICK HERE!