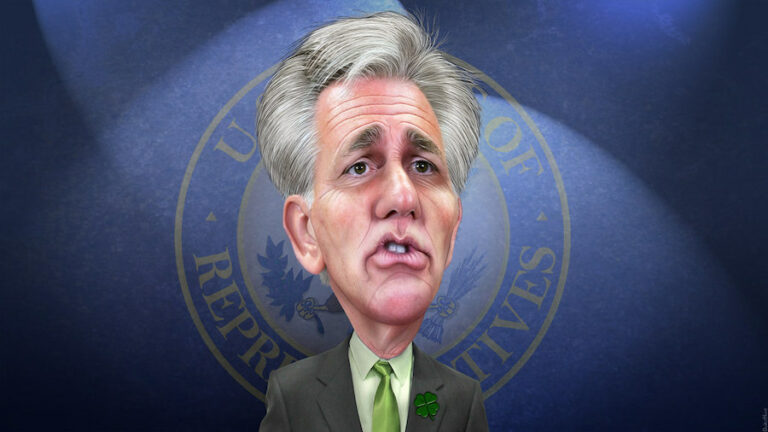 "Kevin McCarthy - Caricature" by DonkeyHotey is licensed under CC BY 2.0. To view a copy of this license, visit https://creativecommons.org/licenses/by/2.0/?ref=openverse.

Reality Check: MR. McCARTHY, YOUR CHICKENS HAVE ARRIVED & ARE PRIMED TO ROOST

As I write these words on the second anniversary of the attempted insurrection of this nation planned, led, and perpetuated by one of two of our major political parties, the Republicans are once again taking their anti-democratic agenda to the floor of the United States Capitol. This time instead of storming through the windows and killing cops, they got inside legally. Voters put them there. (Well, gerrymandering and weird results in otherwise blue California, New Jersey, and New York put them there, but they got inside nonetheless and they are very much doing the same thing – wrecking the place.) Instead of flak jackets, Confederate flags, and semi-automatic guns, they don suits and make speeches. But make no mistake, this is more of the same: Republicans destroying democracy.

The focal point of this has been minority leader, Kevin McCarthy, getting struck down in a once-in-a-century rejection by his own party to become speaker of the House after Republicans took a slim majority when the purported Red Wave failed to materialize – like the Death Panels, the Caravan, the Wall, the Rigged Election, and most Republican delusions of the past years. The count by the time I write this is 11 – each time McCarthy sat there gobbling down the very shit he shoveled into the chamber over the past 15 years as he dreamed, connived, and boasted about getting the gig and using the gavel to beat the previous speaker, Nancy Pelosi, over the head with it.

This very public, tragic, and gloriously hilarious humiliation was made ever more painful when considering McCarthy failed in much the same way in 2015 and was forced to demure to a flustered Paul Ryan, who heard from the last guy, John Boehner, how vile it was to corral the heap of bleating feces known as the Freedom Caucus into a governing construct and proceeded to get his ass kicked for five long years. That is until his president, Donald J. Trump – the domestic terrorist avatar – coughed up the House and the Senate and eventually the presidency and riled up the great unwashed to storm the Capitol and we know the rest.

But McCarthy is not the disease. He is the symptom of a virus ushered into the House on the 2010 Tea Party wave. Remember those guys? Oh, what a merry time of misrule that was – phony anti-government ideologs joining the government as a knee-jerk outrage to the Affordable Care Act (very popular now). Once again deluded into thinking the public wanted their Ayn Randian nonsense, they turned the chamber into middle-school rebellion, like smoking in the boys’ room but with press conferences. White guys on parade – Eric Cantor (soon sent packing by a further right-wing insurgence) and the aforementioned Paul Ryan, who helped the Trump Administration explode the national debt – very un-Ayn Randian. They called those three the Young Guns back then, before it all went terribly wrong. They were going to change things, but soon Cantor and Ryan were unceremoniously sacked, leaving McCarthy to hang around and sniff a new cynical angle. Devoid of integrity and clearly possessing no actual ideology, he hitched his wagon to the MAGA crowd that made the Tea Party look like liberal hacks, but because Republicans were under another delusion that anyone really wanted Trump as opposed to rejecting the establishment candidate, Hillary Clinton – in the Bush-Clinton-Bush three step – they quickly found themselves once again out of power.

And this brings us to this week, where the mutated offspring of McCarthy’s silly Tea Party (please read this address I made at a 2010 Tea Party rally for my excellent prediction of all this) arrived hell-bent to deny him the speakership in much the same way he came riding into town – anti-American blather cloaked in patriotic swill. The delicious irony is hard to ignore. The very flawed, gerrymandered-district-nothing-to-lose domestic terrorists (and that is how former GOP speaker and dementia-addled Newt Gingrich framed them this week) are giving McCarthy a bit of his own dime-store boondoggle.

If you campaign and win virtually uncontested races, then you have no incentive to govern. Vote for a speaker of the House? Why? It’s way more fun pissing on the whole thing by voting for Trump or some unknown Black Florida congressmen to play a little “identity politics vengeance” and use the TV time to rail about the border when all you really want to do is strip women of rights, oppress votes, and support Russian aggression in Europe.

Thus, McCarthy is royally and effectively fist-fucked by his own making.

Mr. Frankenstein, your monster is here to see you.

And to best illustrate how completely delusional the entire Republican implosion is look no further than to its media blowhorns, which defended a violent rejection of our democracy two years ago but now preach sanity to embrace the law. Well, fuck them. At least these duly elected 20+ representatives who are making a mockery of the system, the country, and the party are not treasonous criminals. But to hear the Sean Hannitys or Tucker Carlons, the New York Post or the Wall Street Journal tell it, they are mad.

Tto be fair, the very aberrations that whisked McCarthy into power and are now denying him the gavel, were invented and then disseminated by these rodeo clowns

The echo chamber giveth and taketh away.

Sure, reality sucks for those who guaranteed a Red Wave and are faced with three days of abject degradation instead. The same strange reality of accepting defeat after being told Trump was going to win despite mountains of polling evidence before and then raw numbers after the 2020 election. You see, we may be witnessing political suicide, but none of it suddenly happened this week or even two years ago. This was the long-range plan embraced and perpetuated by its latest victim, Kevin McCarthy, who visited Trump days after the 2021 insurrection to gain his favor. Ask Mike Pence how that works. He got to be vice president eating the same dung for four years, listened to Trump toss him to the wolves, and then watched in horror from his office window as Trump terrorists erected gallows with his name on it. Those gallows and these protest votes to screw McCarthy started with his Tea Party and grew into his MAGA and ends with the convergence of January 6 of 2021 and 2023.

But who cares about McCarthy or the Republican Party? What I am here to ask is why do we keep voting for these people? It’s like inviting al Qaeda to hang out at the Freedom Tower in NYC.

The Republican Party is the enemy of democracy.

The sooner we all come to grips with this and defeat and that enemy, a better America it will be.