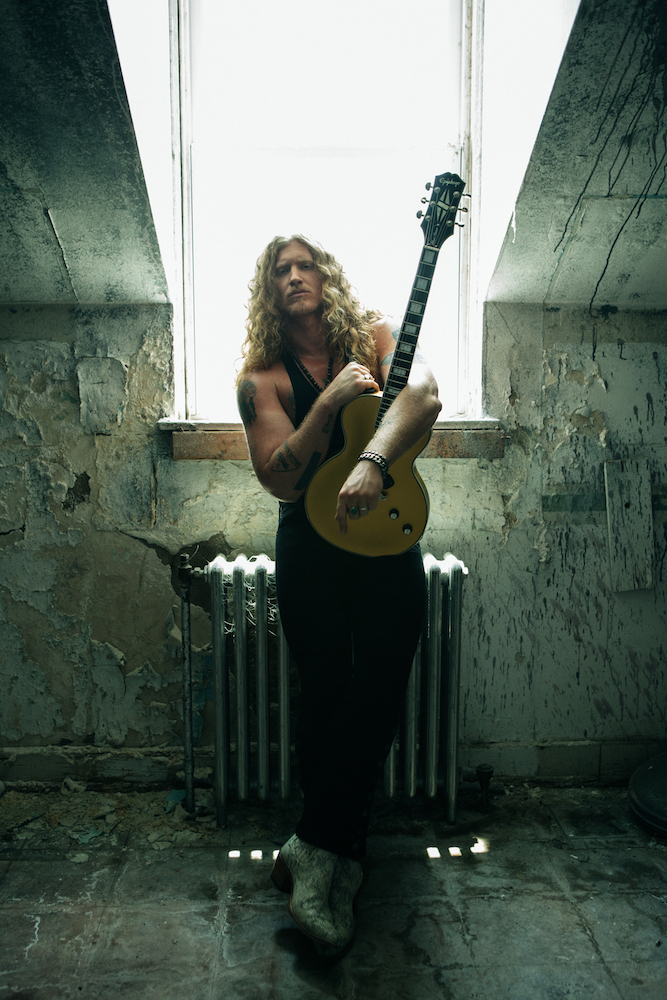 A funky, gritty, electric performer, JJN has wowed rock lovers before, but never so intimately.

Jared James Nichols litters his original work with the best of rock music adjacent – blues, metal, and classic. At just 33, he captures a timeless musicianship and combines it with high octane everything. The songs are fast and fierce, notably heavy at times but jam-session-worthy at others, while the guitar licks are sharp and overflowing with memorability, and the performances are energetic, vocally challenging, and powerful. Turning the volume up on your speakers, radio, turntable, TV, or amp is a must when it comes to the hot, bombastic discography of Nichols. One cannot evade the strength of a good rock tune, especially when cut so clearly, carefully, and captivatingly by a youthful star like Jared James Nichols.

As soon as The Aquarian caught wind of JJN’s forthcoming record, we were quick to want to know as much about its creative process as possible, so a track-by-track interview was necessary and almost inescapable. We are honored to have had the chance to dive headfirst into the energy and ecstasy, as well as utmost personality, of this self-titled record – the third from the ever-diligent Nichols and his guitar-wielding prowess.

“This was the first track we recorded for the album. You can feel the energy from the very first note. We really wanted to set the bar high for the entire album with this one as the opener. Musically, it rocks like a freight train and I absolutely love that. This track was a one take wonder.”

“If there was one track on the album that would stick in my head forever, it would be this one. Stylistically, it’s a mix between old school stomp-blues and a full-throttle rock anthem. Lyrically, it is a leaving song with attitude… easy come, easy go. Another cool aspect with this one is the solo section – total improvisation. I remember that Dennis, the drummer, went into a new groove on the spot and we just went off. What you hear on the recording is exactly the way it went down.”

“‘Down the Drain’ is one of the first songs I’ve ever written that had people genuinely excited from the first time they had heard the demo. When I was writing this one with my friends Devin Guisande and Aaron Chafin, it basically wrote itself. This song came out of thin air and we all knew it was special. It was such a statement song that we decided to make it the first single off the record. This one encapsulates all of the sounds I’ve been searching for finally getting captured on record.”

“I wrote this track with my good friends Tyler Bryant and Graham Whitford from Tyler Bryant and the Shakedown. We were jamming in Nashville and came up with the bones and inspiration for the track. Once we penned down some lyrics, we just went for it. This song was fun to write and a total blast to record. When listening back, this feels like a stick of dynamite ready to explode.”

“This track was written during the start of lockdown and amidst the confusion we all were facing at that moment. Lyrically, this track is meant to shed light on certain things that we sweep under the carpet. Not everything in history has come from positive situations, instead of trying to hide mistakes or bad things in history, we need to learn from them. I loved recording this song because it is completely full tilt high energy rock and roll.”

“This song was written with my friends Marti Frederikson and Zac Maloy in the winter of 2020. It just clicked! I had the intro guitar riff floating around in my head for months and when I played it for the guys, that was all it took. The song was written and demoed within an hour. I love the message behind this one: all in all we all can change because inside we’re all the same.”

“This song was written as a self-reflection to myself and to anyone else reaching for a dream. Some things take blood, sweat, and tears to accomplish… it’s the way it goes [with] a lot of time away from loved ones and from home. It’s a testament that even with hard work, there is always such a long way to go to reach your goals.”

“This was the sleeper track on the record. Initially, when I brought this into my producer, Eddie Spear, as an idea, it wasn’t too well received. We just weren’t sure where to take the song or how to let it grow. I distinctly remember the moment it all came together: we were in the studio and I started to play the intro riff through a Leslie speaker. It was heaven! We really vibed out the choruses and went for it. Overall, one of my favorite songs on the record.”

“This is another one of those riffs that had been stuck in my head for ages. ‘Good Time Girl’ was so much fun to record, and, again, a one take wonder. Funny story, I remember trying to find the perfect ‘wah-wah‘ for this song. I went through at least 10 to find the perfect sounding ‘Way!’ I love the heavy groove and the funky feel this track has.”

“This song originally started as a bluesy ballad, but when we brought it to our pre-production rehearsals, it felt a little stale. Our fearless producer Eddie wanted to totally flip the script – he wanted to go heavy. At first I was a little taken back at how heavy it was getting, but ultimately I fell in love with the idea! I remember this one was recorded super late at night; you can literally hear the speakers crying, ready to break. It is definitely the most raw track on the record.”

“This is one of the last songs we cut for the record. If you listen to the intro, you can hear an acoustic guitar and my vocal, and that was the original version of the whole track. We really wanted to make a statement with this song and keep it simple. Eddie sat down on the piano and banged out three descending chords, we went with it. When we recorded it, we didn’t have a set structure so we just felt it out on the spot. It was real, raw, and organic.”

“I wrote this song after one of the hardest situations I’ve ever dealt with in my life: losing my father to cancer. This song cuts deep and is super emotional for me. I still have a hard time listening back to it.”

JARED JAMES NICHOLS’ SELF-TITLED ALBUM IS OUT TODAY WHEREVER YOU LISTEN TO MUSIC!