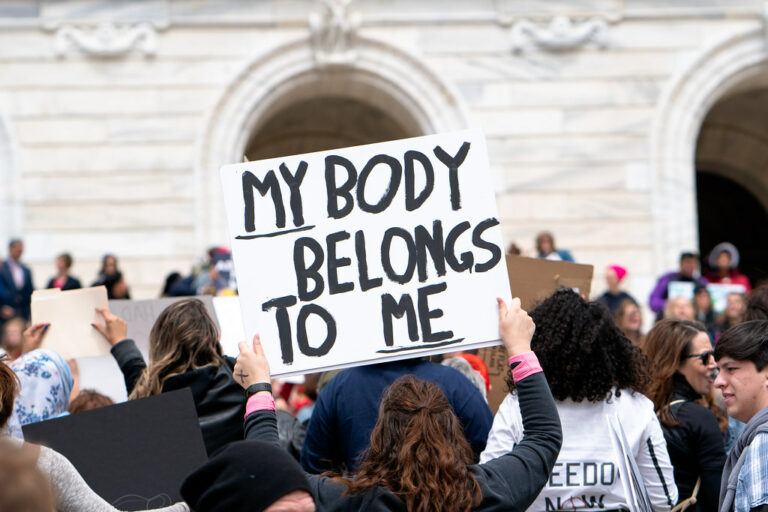 "My Body Belongs To Me sign at a Stop Abortion Bans Rally in St Paul, Minnesota" by Lorie Shaull is licensed under CC BY-SA 2.0. To view a copy of this license, visit https://creativecommons.org/licenses/by-sa/2.0/?ref=openverse.

Within 72 hours of taking a slight majority in the House of Representatives we get a unanimous (222) Republican vote on two bills to ban abortion nationally, building on the unconstitutional Supreme Court ruling that tossed a 50-year-old federal law protecting women’s reproductive rights provided by the U.S. Constitution’s Fourth and Fourteenth Amendments and sent it to the states. Every Republican voted for this, even moderates from blue states that barely gave the fascists the gavel after a surprisingly lackluster midterm showing due to the backlash of the SCOTUS overreach. These fuckers couldn’t agree on a Speaker of the House for 15 rounds of voting over the course of a week, the first time it took that long in 150 years, but with their seats barely warm, they came together to hammer home what they are really about: Curving inflation? Nope. Curtailing crime? Nah. Fiscal responsibly? Pish-posh. Border security? Not a wit. Enslaving 52%of the populace, this is their aim.

Although almost every pundit and insider paying attention to such things realized that beyond the Republican insurrection of 2021 fueled by a year of anti-democratic rhetoric, the striking down of Roe v Wade last summer led to a Democratic uprising to not only stem the tide of a purported Red Wave (and, to be fair, considering the economy and 200+ years of history about the opposition party doing well in the first midterm of a president, it was expected) the Dems kept the Senate and nearly the House. Again, what saved the GOP were Republicans in states that have protected abortion laws – New York, New Jersey, and California. Voters stupidly thought their rights were safe, so why not vote Republican? However, in states where there are Draconian laws jailing doctors and rounding up rape victims or women with miscarriages, the Republicans shit the bed. These blue-state voters were wrong. Surprise! Republicans are pushing for a federal ban on abortion that will put you in the same boat as Alabama or Texas.

At least those who tried to downplay this civil rights disaster in a shameless attempt to get elected can now be outed. We know where they really stand – all of them. There are no moderates in a party now completely ruled by fascists and religious fanaticism. There is zero reason to ever vote Republicans if you believe in habeas corpus, the right to privacy, and certainly keeping the fucking government off our bodies. This is for all those men who don’t give two shits what women they knock up, it’s their problem now – first it will be women, but believe me, they will stop at nothing. These lunatics who preach that guns are sacrosanct, but women’s uteruses are open season? They will come for your cocks next, bubba.

I had a progressive friend recently rightly point out that without the senate or the presidency these kinds of showcase bills are merely to toss red meat at the great unwashed, but I reminded him as I do all the centrists, progressives, independents, and general believers in the concept of freedom, we are only two years away from a very difficult map for Dems in the senate and a presidential election. All this changes if Republicans gain power. They will, if this week is any indication, take all of three days before they will ban all abortion everywhere. Just like the justices who told everyone Roe v Wade was “settled law,” then got appointed and tossed it without a second thought. These bills prove without a doubt that they will ban abortion nationally in 2025 if elected – and they aren’t even being coy about it anymore. First time in power since 2018 and BAM! two bills that would be law if there was a Republican senate and a Republican in the White House.

This warning goes for the final few who identity as Republicans but do not want women to be arrested for deciding what to do with their healthcare. Because this week, with these votes, Republicans have shown their hand. Check that. They have shouted from the rooftops, that this is a siege on women’s rights, and it will not stop until all fifty states are under their thumb.

These votes prove what I have been telling you all along, so this is not hyperbole from a guy who practices it routinely here. This is reality and, as I pointed out last week, the sooner we come to grips with it, the better. There is nothing left to do by vote for the only party protecting women to have enough Democratic representatives, senators, and a president to cement into law protections from government rule over women. And this goes for Democrats running from now on. This must be the lead to any discussion, debate, campaign ad, whatever. Take rights back. Protect the citizenry from tyranny.

This is what voting for Republicans gets you. All that talk about the economy and cops and all the other bullshit is just that. Republicans want to do one thing: Reduce women to baby machines under the threat of law. And they will run the entire thing from Washington D.C.

This past week they voted for this reality twice.

And they are not going to stop.

We have to stop them.