For the average working man or woman, Mondays mean back to the daily grind after a quick weekend break. For me, this particular Monday meant that it was “Motley Monday”! Many of you who read my column every week know that I am a huge Cruehead! So, of course, it was only fitting that I accepted my invitation to attend the Motley Crue Press Conference at FUSE in the afternoon and then the Motley Crue concert at the Mecca, Madison Square Garden, later that evening. 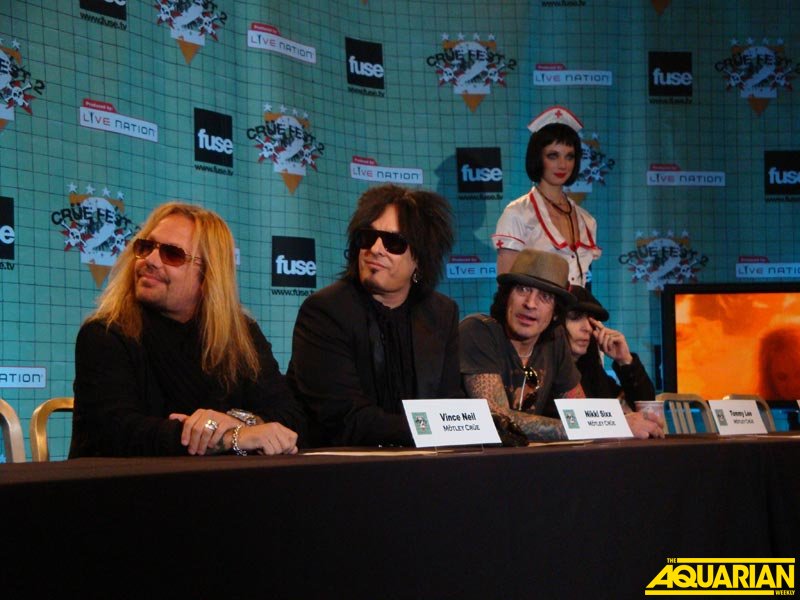 While I waited outside of FUSE with my other press peers for the Motley ones to show up, I took a look around at the fans waiting outside, and noticed that there was still a passion for this legendary band, not really known for their musicianship, but mainly remembered for their theatrics and off-stage debauchery. At around 12:30 p.m., Motley Crue arrived at FUSE in Motley Crue style—in a vintage ambulance with naughty nurses accompanying them. Once inside, singer Vince Neil, guitarist Mick Mars, bassist Nikki Sixx, and drummer Tommy Lee were bombarded with flashbulbs and questions from the media. The press conference was for Motley Crue to announce their plans for this summer’s “Cruefest 2” Tour. First, they mentioned that they would be performing the whole Dr. Feelgood CD front to back to celebrate the twentieth anniversary of the CD’s release! Second, Motley Crue would announce and introduce the band lineup that would join them on this year’s Cruefest! Joining them this year will be Charm City Devils (a band that Nikki Sixx signed to his Eleven Seven Music label), Theory of a Deadman (who is currently on tour with Motley Crue), Drowning Pool, and Godsmack (if you don’t know these two band’s, you don’t even deserve to go to any of these shows!). Like last year’s Cruefest, Motley Crue released a new single and video to coincide with the tour including members from each band in their new video for “White Trash Circus.” Sully from Godsmack seemed to be humbled about being asked to join this year’s Cruefest stating, “I think it’s going to be a really, really fun summer! We’re proud to be on this tour and excited to play with these guys! I even told Tommy that I’m going to have to buy a padlock just to keep him out of my dressing room!”

One of the important questions of the afternoon regarded the economy and how it would affect ticket sales for this year’s Cruefest. Vince Neil responded, “We were just out last year with Cruefest, and the economy was pretty much the same as it is now, and it didn’t really affect us at all. People still want to go out and have a good time and listen to rock music.” Nikki Sixx added, “It is true that when the economy goes to shit, that entertainment is the one steady thing.” When asked if they were nervous to play Dr. Feelgood in its entirety, Vince replied, “Well, we’re going to need a lot of practice!” Nikki also added, “We’re only going to have to relearn six songs because the other songs we already play in our set now, but we’re also going to be adding classics that aren’t on Dr. Feelgood.” Another question that caught the attention of the rest of the media was the question about the long- awaited movie adaptation of the Motley Crue book, The Dirt, and Vince answered with, “It’s just an ongoing saga that we have no control over. Thank God we’re not in the movie business! There is a Cruefest movie being released in limited movie theaters that document last year’s tour with performances and backstage footage. Don’t worry it will be on DVD shortly!” Before the press conference ended, Vince Neil also announced that he does have an autobiography coming out next year that will expose “his side of the story!”

After spending the afternoon with my idols, Motley Crue….Yes, I did get to hang with them for a little bit after the press conference and they are very cool and down to earth guys….I headed to Madison Square Garden to catch Motley Crue’s set! I actually missed the opening acts—The Last Vegas, Theory of a Deadman, and Hinder—simply because I could’ve cared less about them. I just wanted to see Motley Crue, and they were worth the price of admission! They opened their set appropriately with “Kickstart My Heart” while keeping that energy going with classic songs like “Wildside,” “Shout at the Devil,” and “Livewire”. The boys even pulled off a cool classic two-song medley consisting of “Too Fast For Love” into “On With The Show”. Of course, since they are on tour to promote their new CD Saints of Los Angeles, they had to perform songs off of that CD! So, they played the title track “Saints of Los Angeles,” “Mutherf**ker of the Year,” and the new single “White Trash Circus.” Motley Crue would round out their set out with their rendition of “Jailhouse Rock,” which I haven’t heard since the Girls, Girls, Girls Tour, “Don’t Go Away Mad,” “Same Ol’ Situation,” “Primal Scream,” “Looks That Kill,” “Girls, Girls, Girls,” “Dr. Feelgood,” and a tearful encore of “Home Sweet Home”, where they flashed old videos of Motley Crue from their club days to today. In all, this day was truly surreal and amazing for me. It will be a day that I will always remember as my day with Motley Crue!