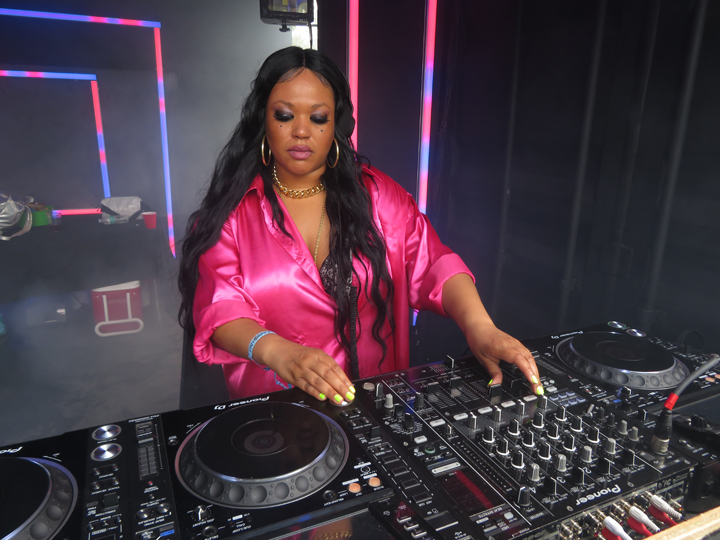 Goldenvoice, the company behind Panorama, cancelled the first day’s open-air events about five p.m. due to an impending storm. Lil Wayne cancelled on the second day because his plane was delayed, and Greta Van Fleet cancelled on the third day due to the band’s drummer injuring his fingers.

Panorama 2018 had a smaller footprint, utilizing less ground area and featuring one less stage and a slimmer line-up than in the festival’s initial two years. Rather than having two bands perform simultaneously on two stages, band performances usually overlapped by only a few minutes between two main stages. A third area was designated for disc jockeys including the Black Madonna and Floating Points; the disc jockeys did 90-minute to two-hour sets.

Several corporations hosted event spaces. Bud Light had a Dive Bar where three bands performed live each day, including City of the Sun, Lo Moon, Cloves, Sur, Loote and Fly by Midnight. Macklemore also did a DJ set in the HP tent.

Attendees who needed a break from live music perused food kiosks, immersive art exhibits and interactive technology centers. The Rough Trade booth sold records and hosted signings by some of the performing bands. The Lab featured a space adventure over its planetarium-styled dome. Through the use of virtual reality goggles, HP took the viewer across the field onto the side of whichever stage had a performing artist. American Express, Sephora, Hendrick’s Gin, Zenni, and Deep Eddy Vodka were among the other sponsors who attracted customers with freebies. Food vendors provided standard fare such as pizza, burgers and fries, but also Japanese, Nicaraguan, Roman and other ethnic foods.

Goldenvoice is a subsidiary of AEG Live and also produces Coachella Valley Music and Arts Festival, Rock on the Range and other festivals in the United States and abroad. Goldenvoice has not yet announced whether or not it will host another Panorama festival next summer.

A brief shower soaked the attendees and the lawns during the mid-afternoon on Friday. Once the rain stopped, Daniel Caesar came on stage to perform and said to those gathered before him, “Thanks for waiting through the rain with me.” He wound up being the only performer to play the main stay that day.

Sabrina Claudio began singing her first song but after a minute or two discovered that her microphone was not working. Her frustration visibly mounted as replacement microphones also seemed to fail. Several microphones later, she was able to resume her set, but then the set was terminated prematurely as the promoters announced that the fields had to be evacuated due to the threat of an impending lightning storm. “What is going on, Panorama?!” Claudio said onstage. “What a hot mess this was,” she added.

Buses were not prepared for an early dismissal during Manhattan’s rush hour, and it took several hours to get festival goers off the island. Patrons grew wetter due to an ongoing drizzle, but the severe weather never arrived.

Upon request, festival goers would receive refunds, but many complained on social media that related expenses, such as travel and hotel rooms, would not be recouped.

Weather conditions improved significantly at Panorama on Saturday, but much of the field was muddy and mushy, discoloring many white sneakers.

Cardi B was originally one of the scheduled artists, but she cancelled several weeks earlier in expectation of the birth of her child. Lil Wayne was booked as her replacement, but half an hour after his scheduled set time, promoters announced on the large video screens surrounding the stage where he was to appear that his performance was cancelled due to a weather-related flight delay. Many in the massive crowd that awaited him subsequently retreated to the second stage to see St. Vincent rock.

St. Vincent was perhaps the most rocking performance on Saturday. Annie Clark seemed to have a never-ending supply of her signature Ernie Ball guitars in every color — blue, orange, pink, white, yellow, black — did she play a different-colored guitar on each song? Clark closed with a partly a cappella version of “New York,” injecting seemingly impromptu mentions of East Village locations including St. Mark’s Place and Veselka and pointing out that nothing rhymes with those names.

SZA was recovering from a vocal cord injury and reworked some of her songs to refit her new range. There was more drama, however. She revealed to the audience that she just went through a break-up. It seemed like everyone in the audience said, “Aw.”

Both Lo Moon and Cloves performed earlier in the day and played a second set later in the early evening at the Bud Light Dive Bar. Lo Moon’s second set included an instrumental cover of Peter Bjorn & John’s “Young Folks,” prompting some in the audience to assist with vocals. Cloves closed with a cover of Mazzy Star’s “Fade Into You.”

DJ Champ warmed the audience for Gucci Mane, but power failures led to silence several times. “We can’t be having that with Guwop, now!” Champ told the stage hands, who scurried about trying to remedy the issue. Later, Gucci Mane invited his wife, Keyshia Ka’Oir Davis, onstage for a cameo, and the sound problems returned. Fans called requests, until Mane responded with an a cappella version of his 2009 hit “Lemonade.”

Moments before Janet Jackson started singing, the audience heard audio reports discussing racial injustice, white supremacy, and domestic terrorism, while the names of unarmed black men killed by police were posted on the screens next to the stage, concluding with the declaration that “WE WANT JUSTICE.” Jackson then sang a deep cut from three decades ago, the appropriate “The Skin Game (Part 1).” Later, she sang “Together Again” while old photographs of a younger Janet with her recently deceased father and photographs of her late brother Michael were posted on the screens. After the song, she spread her arms wide, then pointed to the sky and said, “I miss you — both of you.” One question, though: how was it possible for Jackson to dance such elaborate routines so heartily continuously through her show and still sing without losing her breath?

Japanese Breakfast, Pvris, Sigrid, Jay Som and Kalin White were among the performers who also performed on Day 2.

Although there was no significant rain on Sunday, the field became muddier and messier during the course of the day, perhaps because of the melting ice from all the vendors.

Whereas the bill for the first two days was largely pop fare, Day 3 featured many alt rock and indie bands. Many in the audience came wearing Greta Van Fleet t-shirts only to see Panorama staff walking around the field holding placards with new set times that clearly omitted the hard rock band’s performance; drummer Daniel Wagner had injured his fingers and the band cancelled its performance.

The Downtown Boys started the day with a political punk set that saw vocalist Victoria Ruiz lower herself into the audience, climb over a railing, and sing a cover of Bruce Springsteen’s “Dancing in the Dark” with audience members. The Downtown Boys was among the bands that participated in signings at the Rough Trade tent.

Shannon and the Clams was the second act, and somewhere towards the end of the set, audience members were inspired to form a conga line. Vocalist Shannon Shaw commended one audience member for dancing the Macarena.

Rex Orange County did an acoustic cover of Alicia Keys’ “No One” during his set. Later, he paused for a few minutes during “Corduroy Dreams” to ask for assistance from the festival paramedics for someone in the audience.

David Byrne appeared on a very lean stage that had only a card table and folding chair. He sat, holding an oversized model of a brain, and singing to backing tracks. After the first song, 11 musicians, singers and dancers appeared on stage wearing gray suits similar to Byrne’s. Byrne was barefoot, but his team members wore foot-like covers over their shoes. The entire regiment engaged in constant choreography, some of it marching-band style, throughout the set. The songs from Byrne’s days in the Talking Heads generated the loudest responses. He chatted only once with the audience, encouraging everyone to vote in all elections. He introduced his set closer, a cover of Janelle Monae’s “Hell You Talmbout,” by saying, “She wrote this song in 2015, and she performed it at the Women’s March, and sadly, it is still very relevant today.” He updated the lyrics to include additional names of African-Americans killed by police or vigilante violence.

“I’m not much of a crier, but I’m close,” said the xx’s Oliver Simon during the final stop of the band’s world tour. “The first writing sessions we did for this album were in New York, our first show was here in New York, so it’s perfect to finish it here,” he explained. He dedicated one song to the LGBT community, adding, “I am one of you.”

Odesza performed a set arrayed with so many dazzling light displays that it was often difficult to see the two members. At one point, Odesza remixed Little Eva’s “The Loco-Motion” with the addition of a live trumpet player. Vocalist Naomi Wild, who was celebrating her birthday that day, sang on “Higher Ground.”

While many artists had high tech stage sets, the Killers had an artistic and rather simple set that included a water tower emblazoned with the words “New York.” For the song “For Reasons Unknown,” the band asked for a volunteer from the audience to drum, and the youth who was selected did an amazing job.