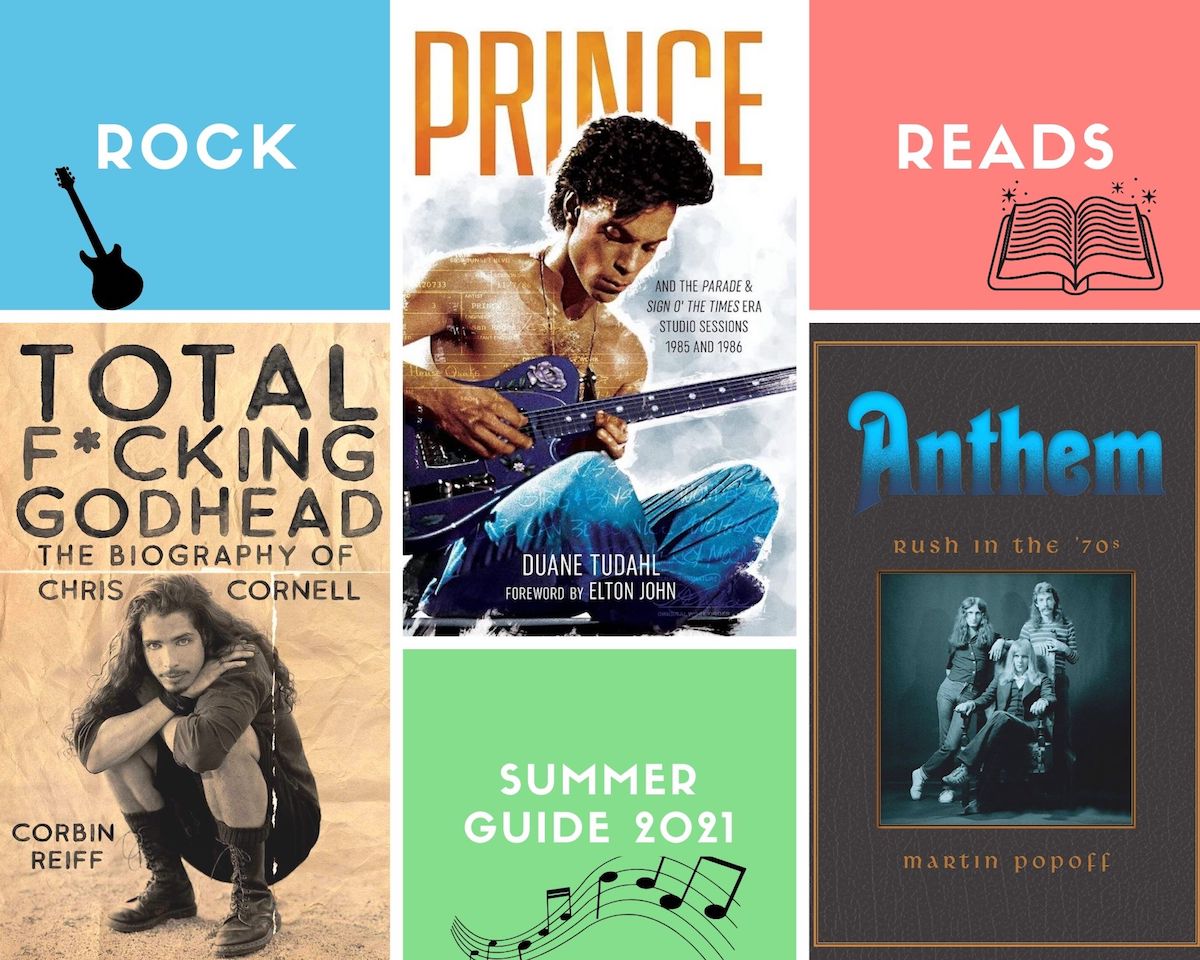 ROCK READS  – A Summer Guide For The Rock & Roll Literate

Looking for a celebration of music in words to while away your lazy summer days?

Good news: Rickie Lee Jones’ prose is very much like her lyrics – poetic, symbolic, penetrating. She writes like she sings. There is a free-flowing, jazzy, impish honesty delicately balanced between confessor and voyeur… and this is before you ever get to the music.

Half of the book deals directly and quite harrowingly with a childhood that is equal parts Dickensian and Dionysian. It begins with stories of a young artist in a car rambling around Hollywood, New York City, and New Orleans, but it is only a hint at what these pages reveal; a child on the run with and without her family, hippie communes, wild street marauders, pimps, exiled Mexicans, drug dealers, and reckless dreamers. Also, a young woman as symbol, the 1960s idealism devolving into the 1970s well-earned cynicism, and finding in this peripatetic, free-flow dementia, brilliant songs. Lots and lots of songs, and an anguished and sensuous woman’s vocal prowess to bring them home.

The second half of Last Chance Texaco introduces a new cast of sordid characters, many you know, as they are all great artists and lovers: Lowell George, Tom Waits, Dr. John, along with a painfully honest rebuke and celebration of stardom within the music biz labyrinth. Jones’ description of her epic appearance on Saturday Night Live is worth the entire ride. There is a resignation of sadness in Jones’s writing that gives way seamlessly to philosophical depth and finally an embrace of contentment that works as a beautiful addendum to her music, which always featured a refined madness.

This may well be the finest rock memoir I have reviewed here. A unique entrance in a disquieted creative mind that finds its solace in experience.

In another Herculean achievement, (I reviewed his 2018 Prince and the Purple Rain Era Studio Sessions: 1983 and 1984 here) author Duane Tudahl does masterful research and a compilation job trying desperately to keep up with Prince Rogers Nelson’s creative peak; his post-Purple Rain explosion of output for himself and a host of artists across the musical spectrum.

Tudahl’s work has now become must-reads for Prince aficionados much like Mark Lewisohn’s brilliant work chronicling the Beatles impressive nine-year output. The thing is that the Beatles were loungers compared to Prince from the early eighties to well after 1990, with the bulk of this spectacular run covered in Parade and Sign “O” the Times Studio Sessions.

In my tribute to Prince upon his death in 2016 in this magazine, I wrote about his tireless dedication to music – literally living in the studio, playing after-show concerts until the wee hours of the morning, running his bands ragged with rehearsals and soundcheck jams, then expanding his songwriting and producing to include his own stable of bands and straying outside the Minneapolis cocoon to offer his talents across the globe. This is the central force of this book: Prince working with dozens of protégés and then Miles Davis, the Bangles, Sheila E., Sheena Easton, sending songs to Bonnie Raitt, Patti LaBelle, and Kenny Rogers after rolling off week-long jazz fusion sessions called The Flesh. Then releasing Madhouse project albums, too.

In the twenty-four month period covered by Tudahl, Prince would tour Purple Rain, while composing, producing, and recording Sheila E.’s Romance 1600 – on stages after the shows – direct Under a Cherry Moon in Paris, disband the mighty Revolution and begin to gather a new band, while recording five albums (Parade included) worth of material, much of it appearing on his epic double-album Sign “O” the Times released in 1987 and later The Black Album, Lovesexy and Graffiti Bridge (Dream Factory, Crystal Ball, Camille). All of this was along with a host of B-Sides and all of it became top-notch, experimental, funky, rocking, and melodic gems.

Prince may be the most important musical artist of the latter half of the twentieth century and this book underlines this with zero fanfare. Just read the magic, as it rolls from day to day. Amazing stuff.

There was a spate of John Lennon anniversaries in 2020 – he would have turned 80 in October, 40 years since his death in December, and 50 years since the release of the most dramatic, explosive, raw, and confessional of all pop/rock music albums: Plastic Ono Band. In 1970, during the demise of the Beatles and a series of public (and private) ups and downs, Lennon and his wife, Yoko Ono, were joined by ex-Beatles drummer Ringo Starr, old friend from the Hamburg club days, Klaus Voormann, and infamous producer, Phil Spector, to record the fallout. Lennon fans know all about the couple’s dalliance with Primal Scream Therapy and its effects on him, particularly the reliving of his childhood traumas and the angst he suddenly felt for his former band, which he duly unleashed on the world in a two-part Rolling Stone interview “Lennon Remembers.” This all feeds into the musical narrative of the album.

Author John Kruth covers the incidents and inspirations that led to Plastic Ono Band, as well as putting us in the studio and in the mindset of the participants. But what makes this a critical historical document of the sessions, is the attention paid to Ono’s mostly overlooked contribution. Many people are unaware that there were two Plastic Ono Band records with similar covers and photos of John and Yoko as children on the back. Using the same line-up as John’s stirringly stark renditions of his emotional songs, Ono essentially reinvents rock and jazz music, which later worked as a creative guidepost for the coming decade and beyond, especially with the advent of Kraut rock and punk.

Plastic Ono Band is my favorite ex-Beatle solo album; the context of its messages from the end of the 1960s dream to dealing with past tragedies, mining the deepest depths and heights of love and loss, and sharing the troubled mind of one of the greatest voices in the history of the genre. In its care for detail and sidelight, Hold On World delivers a similar telling and is more than worthy of its subject matter.

Part of a “Rush Through the Decades” series by author Martin Popoff, Anthem and Limelight comprises the most comprehensive journey into a successful rock band as can be consumed. Straight from all the sources that matter – parents, friends, roadies, manager, record agent, producer – including all three band members, bassist, and lead vocalist, Geddy Lee, guitarist, Alex Lifeson, and drummer/lyricist Neil Peart, the book reads as an oral biography. Swaths of paragraphs are conversational and anecdotal, putting you in the room, on the stage, and in the mindset of unfolding events. Rush’s story is one to admire as it is an inspirational tale of three uniquely talented Canadian lads finding their way to a boldly original sound, embracing it, then changing it again and again; all the while fighting to maintain truth in their art. What’s not to love? Whether you’re a fan or not.

When he does chime in, author Popoff does so with great care and some objectivity (he’s obviously a fan) in breaking down all the songs in the band’s early – and some argue golden era – career. Driven: Rush in the 90s is the next in the series and will no doubt provide the same archival dedication to the band’s arc that would come to an end with Peart’s death in early 2020.

I absolutely adored this book. Doubtless, my obsession with the musical subject and a preteen fascination with Jesus Christ Superstar has quite a bit to do with it, but as author Devin McKinney states in his introduction, loving or even knowing the famed rock opera is not an important ingredient to enjoying this story. Everyone knows someone who has had college or just plain institutional experiences like the one McKinney covers here, right? A bunch of forward-thinking and determined faculty members teaming up with enthusiastic young students to change the course of a school and a town’s fortunes. Okay, maybe not. But I think we all wish we did.

Jesusmania! reveals everything that is great about the spirit of a generation willing to dream and achieve a goal that begins with passion and ends in triumph. The hometown cooking McKinney brings with true pride to the Gettysburg, Pennsylvania milieu is part of the book’s charm, and his finding the voices of all those who participated in one of the first and only organic productions of the famed rock opera, before it became a Broadway hit and a theatrical institution, is paramount. These are mostly amateurs, barely familiar with the material they must conquer under a crushing deadline, dealing with church and school parameters, record label legal shenanigans and each other. McKinney takes us there every step of the way – the inspiration, hurdles, rehearsals, staging, musicians, and performers, all swept up in this one-time moment of creative achievement.

The death by suicide of grunge icon and long-time Soundgarden vocal dynamo Chris Cornell at age 52 caught the world by surprise in 2017. Unlike the brooding self-destructive contemporary Kurt Cobain, who famously took his own life decades before, Cornell was thought to be a rock and roll survivor who had successfully navigated the tides of fame and the music business to achieve a hard-earned place of respect with many years left to thrive.

It is to the credit of author Corbin Reiff that the death of Cornell does not hang over this account as any kind of grim foreshadow, and the evolution of the artist and man are given the proper retelling through the remembrances and quotes of not only many who shared his adventures but also Cornell himself. It is an engaging read that also entices one to explore some of the lesser-known material of Cornell and his various musical collaborations.

The rise of Soundgarden and the Seattle scene of the early nineties is recounted in all its rain-soaked glory, with Cornell’s talents as a singer, songwriter, and frontman given a full examination. The success of the band is portrayed well as a culmination of years of toil and dedication, and fans of the era and its bands like Mudhoney, Pearl Jam, and Alice in Chains will enjoy the trip down memory lane.

The Audioslave years, the solo releases, and television appearances – the Soundgarden reunion after more than a decade apart – all are presented with detail, as is the ultimate suicide by Cornell in a hotel room by hanging.  The question of why a man so gifted and loved would take his own life may forever remain a mystery, and the author correctly does not try to answer that question, but instead conveys the love and appreciation felt by Chris Cornell’s family, friends, and fans for all the years of entertainment provided by the man.