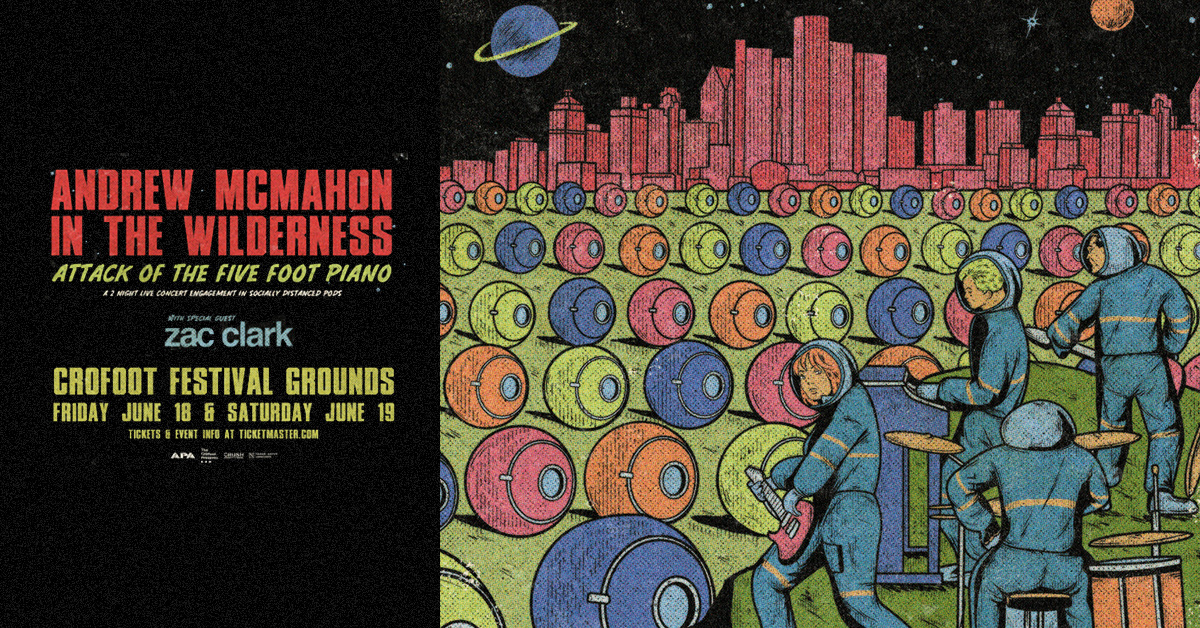 Diving Into The Deep End Of His Catalog – Andrew McMahon In The Wilderness / June 19, 2021

Attack Of The Five Foot Piano: Andrew McMahon In The Wilderness’ Live In Michigan livestream was nothing short of a real, in-person, live spectacle of a show.

On Saturday, June 19, 2021, Andrew McMahon walked onstage in Michigan with his longtime friends, Bobby “Raw” Anderson, Jay McMillan, Mikey “The Kid” Wagner, and new addition to The Wilderness, Morgan Paris. He gives a wave and an applause to the crowd – familiar faces, unfamiliar faces, groupies and mega fans – lays his hands on the keys, and dives into “Fire Escape.” The next thing you know, he’s atop his piano. He greets Michigan with another applause as the band transitions into a Jack’s Mannequin classic, “The Mixed Tape.” His iconic leap off the piano starts the party. “As I’m swimming through your stereo, I’m writing you a symphony of sound,” he sings.

He calls out to the crowd, “I want to hear you!” Setting the tone of variety from his extensive catalog for the night, we hear the first notes of “High Dive.” Mikey and Bobby’s sweet harmonies ring out and the energy immerses you into a pop song about looking on as someone you love dances their heart out with their headphones on like no one’s watching.

McMahon pauses after the song ends, takes a walk around the stage, then sits back down to have an intimate talk with the audience (as he often does). He addresses the changes in the world and the toll it’s taken on the live arts. This isn’t a somber talk, as he goes on to say that throughout the pandemic, he has been lucky to have stayed connected to fans via drive-in shows, live streams, Instagram Live, and tonight, a socially distanced “pod concert”/live stream.

At this particular show, the band really digs through McMahon’s catalog, playing songs from his high school days up to the present. He playfully sprinkles in bits of storytelling and reminiscing throughout the night, some bits of which I’ve never heard as a 15-year-long fan of Andrew McMahon. I knew I was in for a pleasant night of singing along to cult classics as well as deep cuts that I have never witnessed live as Bobby begins to play the riff to “21 And Invincible.”

Andrew began writing songs on the piano as a young child, a prodigy as one may call him. In high school, he and some buddies — who would turn out to be lifelong friends of his — found their sound in the early 2000s pop-punk scene. Traveling the country in a van, parents in tow, they would go on to call this project Something Corporate.

After Jack’s “Holiday From Real,” Andrew hops offstage running into the audience for the entirety of the crowd-pleasing “Canyon Moon.” He emerges from his dive with a rubber ducky tossed to him by a fan. Let me explain. At traditional shows, an integral part of his finales includes him riding a pool float over the crowd. There have been various shaped pool floats, but I guess the rubber ducky just stuck.

As he introduces “Ohio,” he says to the audience, “Something that occurred to me in the middle of this pandemic was this idea of why do we make things, why do we create? And it’s to, uh…. It’s to ease some sort of burden, right?All of these songs, there’s a little piece of me in, and when we sing them together, there’s a piece of all of us.” My heart fluttered, as he references a line in the slow and moving Jack’s song, “Caves”: “Everything’s a piece of everyone.”

Following his SoCo days, McMahon put together a little project called Jack’s Mannequin. As he plays the deep opening chords of “Spinning” and begins to sing the Jack’s tune, Morgan Paris really shines as the recent addition to the band. Female vocal harmonies are totally new for AMITW. She sings the harmony, while playing along with Andrew on the synth, and carries that harmony throughout the song. After Zac Clark’s departure, who opened for AMITW tonight, the last thing I imagined was a female vocalist, violinist, pianist, guitarist – among other instruments – as a new member of the band. Paris’ multi-instrumental contributions to AMITW, as well as SoCo and Jack’s Mannequin tracks, have been a pleasure to experience in the last two live streams. She switches over to the electric violin for SoCo’s “I Woke Up In A Car,” really adding something special to the music we all know so well. She dances along with such energy and passion for music that precedes her time as the youngest member of the band.

After another leap off his piano, McMahon takes a moment to admire the sunset with the audience. He gives us another story about traveling the country and feeling a little bit like it all gets to an overwhelming point, then begins “Walking In My Sleep,” an AMITW song that doesn’t get much love at live shows. Paris backs his vocals gave way to breathing new life into an old song. “And you see the world in blinding color,” hums the lyrics. The crowd claps along to the bridge and I’ve never heard so much intensity in the performance of this deep cut that he surprised us with tonight.

As a change of pace, he tells us that he and the other members of Something Corporate wrote the next song in a haunted house. This is fitting and unsurprising, but alas something he’s never shared with us before. One of the most unique songs SoCo ever released, he begins “Me And the Moon.” The band gives an aptly haunting, yet upbeat performance of this song about murder, and simultaneously, love. “Blood stained the carpet, her heart like a crystal; she’s lucid but departed.” They play an expressive, powerful ending that sent chills down my spine.

They switch gears as McMahon rises from the piano to make his way toward the front of the stage and “Island Radio” sets into motion. He sings to the crowd, encouraging everyone to sing and dance along with him. Again, Paris’ harmony adds something special to this one, singing along with Bobby and Mikey. Andrew quickly paces the stage before making his way back to the piano bench to give us a subdued acoustic ending to this poppy AMITW track. It feels as though this serves a purpose to drive home the point of the lyrics.

Seconds later, back on the ivories, he leads us into “The Resolution,” another Jack’s song accompanied by the new sound of Paris’ violin. When the song concludes, he takes a quick pace around the stage before the opening of “Maps For the Getaway,” a song so sweet that it will make your teeth ache. There couldn’t have been a dry eye in the audience as the musician sang, “All we have is gas in the tank, maps for the getaway, all we have, all we have is time.”

Andrew tells a quick story. As it turns out, one of his high school teachers (Andrew is now 38) contacts him semi-frequently asking him to issue a public apology for “that song” he wrote… you know the one. He reminds her that he did indeed apologize for this song at his ten year high school reunion and goes on to whisper into the mic ever so quietly, “I’m not sorry.” The crowd goes wild, for he’s about to play the SoCo jam, “If U C Jordan,” a very tongue-in-cheek song about a bully who never quite let go of high school drama. One of my favorites from the back of the catalog, I’ll spare you the lyrics – if you know, you know. If you don’t know, give it a listen, it’ll certainly brighten your day. I can’t leave out that Morgan’s brief violin jam with Bobby Raw was heartwarming.

Zac and his band members come onstage to join them for a few songs, the first being “Television,” which Andrew has previously described as a song about moments when things may not be all roses and daisies with a partner, but he likes to work through the problems before bed.

Suddenly, he hops up from the piano, and everyone knows what time it is when he starts clapping along to the drum beat. A show staple, Jack’s Mannequin’s “Dark Blue” begins and the crowd is teeming with spirit. Bobby and Morgan jam out together again on stage. “Dark Blue” is the single that skyrocketed Jack’s Mannequin’s presence when their debut Everything In Transit dropped in 2005.

Lights flash, the last chord rings, and Andrew thanks Zac and the band for joining him onstage. Andrew closes out with the radio hit “Cecilia and the Satellite,” a song written for his daughter prior to her being born. The last note is played and cymbals sizzle. He thanks the audience once again before the band walks offstage for a brief moment before re-emerging, then Andrew, with a fresh drink in his hand, says, “I mean, you knew we were coming back.”

Once more for the night, the band takes the stage and treats the audience to a few more. McMahon thanks attendees for a final time: “In some way or another our worlds have all changed, and seeing people again and being on the stage again, I’m feeling just a little bit more normal, a little bit more like things are coming back, it is just such a gift and I am so glad that you shared that gift with us tonight.”

He plays a slower song off Everything In Transit, “Rescued,” then rocks out to “Into the Airwaves.” A few years back Andrew recorded a song with Lindsey Stirling called “Something Wild,” which he treated us to with his new violinist, Morgan. This truly did showcase the talent she will be bringing to Andrew McMahon In The Wilderness moving forward. They finished the show with “Dead Man’s Dollar,” and finally, their biggest staple from the Jack’s Mannequin days, “La La Lie,” a piano-rock song about friendship. Ah, that sweet harmonica solo – it’ll get you every time. As the show comes to a close, he proudly introduces his band: his best friends.

Andrew doesn’t disappoint. There are always new intricacies, new stories, new guitar solos; there is something special about every show, every tour, and with every year comes exciting new content from the man and his band. Though I experienced this concert from my own home, the feelings it gave me weren’t any different than if I were there. That is the magic of this artist.