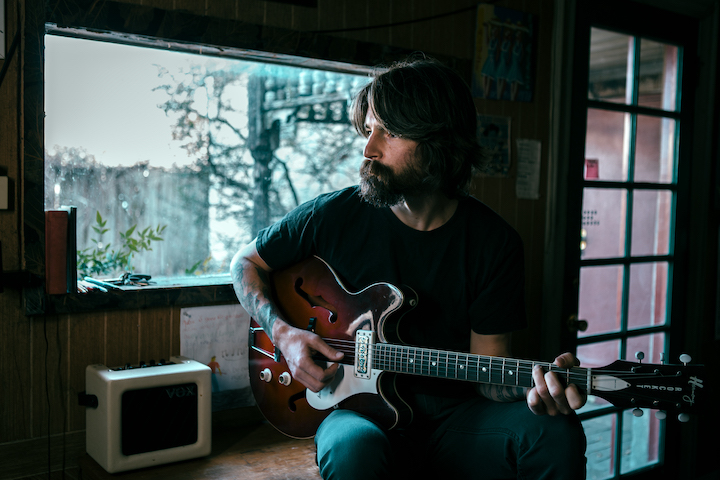 All roads lead to home? That’s not quite the case for Americana musician John R. Miller who has spent a lifetime searching for even just the feeling of home.

The sweet, folksy, homegrown stylings of American roots music has been the soundtrack to the lives of many. Artists like John Prine and Jason Isbell are shaping people everyday without even knowing it. John R. Miller is joining that group of artists who inspire, interpret, and engage through the art of storytelling. Miller’s sound comes from the heart and is heard deep in the soul of music lovers everywhere. It doesn’t even matter that his homegrown sound pulls influence from a variety of pseudo-homes – the magic and elegance is still there. Through our Q&A with John R. Miller, we quickly discovered that said magic and elegance is found not just in his music, but his everyday demeanor.

I want to start off by saying how truly thoughtful this record is. It is clear from the get-go that there is a massive amount of heart within every lyric sung and every note strummed. What was your mindset going into crafting this record? Because it is as raw as it is elegant.

Well, first off thank you so much for saying so! These songs were made up over the course of a few years during a highly transitional part of my life that involved most everything being upended for me and I wanted to try to capture them as honestly as I could. Most everybody involved in the making of the record is either a current band member or old friend and collaborator, which was very important to me for this album. I’m fortunate to know and work with some truly talented people.

This record alone is enough to shift the musical world we’re in now and cause a true resurgence of the singer-songwriter genre in the modern industry. Where do you to for inspiration in what is quite possibly an oversaturated, overproduced world?

Well, admittedly, I am not super aware of everything going on in music today, and I tend to be a bit of a luddite when it comes to my consumption of it. I try to read as much as I can – I love poetry and the transcendentalists – and I also get a lot of inspiration from seeing and listening to how other songwriters conduct their craft. And traveling… I think songwriters are always looking for a good metaphor in whatever it is they’re up to, so staying present is very important.

There has been a massive amount of talk, press, and excitement regarding this debut album of yours. Did you expect to have such outstanding traction this early on in the release process? Does it put a certain level of pressure on you knowing that people are waiting on the edge of their seat for some new J.R. Miller material?

I’m actually quite surprised to hear it! I never feel particularly pressured by the musical side of this whole thing. People can be fickle about what they like and don’t like and I try never  to put too much stock in it, because you just never know where something will sit after a few years. That being said, I’m very grateful for the response the record has gotten so far and it makes me feel like we did our jobs well.

This record is also ridiculously cohesive. There are tones and themes streamlined throughout that make me feel as though it is imperative that audiences listen to this record cover-to-cover – at least the first time around. Do you agree?

I think so! I think part of the thematic cohesiveness may simply be a matter of my limited writing palette, but I think the record’s sequence works well in presenting an arc and flows the way it ought to. As far as the sonic cohesiveness goes, I owe that to the expert production of Justin Francis and Adam Meisterhans, who are both wonderfully intuitive and highly skilled – and the band’s invaluable input from the get-go!

Speaking of themes, the impassioned and frustrating idea of seeking high-and-low for a place to call home and feel accepted and comfortable in is weaved in and out of the tracks. Growing, changing, evolving, but still wanting the base of one place, person, or feeling to go back to is explored heavily. When writing these songs and going about putting a track list together, did you see these cohesive patterns of emotions and stories being told? At what point did you notice that you have a collection of vulnerable and relatable words at hand to be put to song in a harmonious, folksy way?

I don’t think I noticed it while I was writing the songs, but I’ve always tried to process my thoughts and feelings through writing, and that was a period of heavy displacement for me so it makes sense that those ideas would be visited and revisited. I tried for a long time to grapple with what home even looked like, because I’d made traveling my whole lifestyle for so long that I wasn’t even sure how to define it and I’d always been uncomfortable staying put anyhow. If it isn’t a place, and it couldn’t be a person, and eventually the van has to go to the junkyard, what is it?

Your style is heartfelt, as mentioned, but while being heartfelt, it’s also a bit garage band-esque, gritty, country rock meets folk pop in the most nostalgic, well-produced way. How would you describe your sound and the history of your sound to someone who had yet to be graced by your music’s prescence in their lives?

It’s pretty fair to say it’s a hodgepodge of various American roots music influences. It goes from being pretty acoustic, country blues, and folk-inspired singer-songwriter music to groove-heavy Tulsa and Texas-influenced stoner country, with elements of bluegrass and rock and roll spread around.

You are more than deserving of all the praise being sent your way, having heard your record and learned about your journey as an artist and human being. The drive you have and talent you have is seen, heard, and felt loud and clear. Your growing success has brought on reviews and love from the likes of Rolling Stone, American Songwriter, Consequence of Sound, and other notable publications. When you hear about these career feats and widespread appreciation for your work, what do you think?

Well, thank you for sharing that sentiment, and for having me! I admit it’s a very pleasant surprise, but then I just tend to feel like I need to try a little harder. It ain’t healthy for the ego to get too attached to those sorts of things, and I always try to keep a clear head so I can get back to work.

JOHN R. MILLER’S NEW ALBUM, DEPRECIATED, WILL BE AVAILABLE ON ALL STREAMING PLATFORMS ON JULY 16!