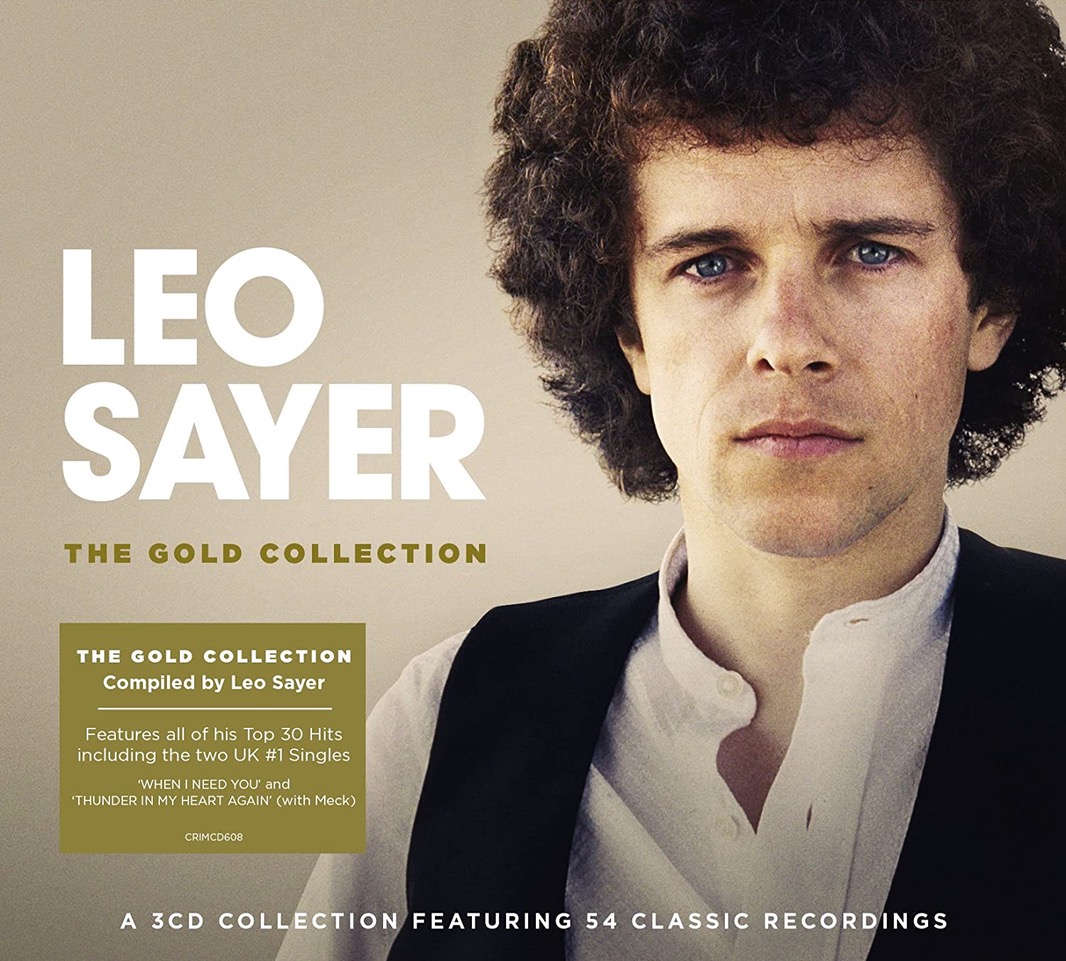 Leo Sayer, The Gold Collection. This anthology from mainstream British pop-rock singer Leo Sayer includes material originally released between 1973 and 2006. That fact is misleading, though, because all but four of its 54 tracks come from an 11-year period ending in 1983. That’s when Sayer was at his commercial peak, scoring nearly a dozen Top 10 hits in the U.K. Among them: 1974’s “One Man Band” and “Long Tall Glasses (I Can Dance)”; 1976’s “You Make Me Feel Like Dancing”; and 1977’s “When I Need You” and 1980’s “More Than I Can Say,” both of which also rose to No. 1 in America. Sayer did have one late-period U.K. smash, in 2006, but that was with “Thunder in My Heart Again,” a DJ’s remix of a song recorded and first released in 1977.

All of that material is in this package, which Sayer himself compiled. It came out three years ago in England and now has a stateside distributor.

Some of the performances have not aged well and, with three CDs, The Gold Collection is arguably too much of a not-so-great thing. But Sayer could be quite likable when he paired his distinctive voice with the right material, such as on “Raining in My Heart,” the old Buddy Holly number, and “Giving It All Away,” which he wrote with frequent collaborator David Courtney. Moreover, since it’s currently selling for only about $11, this anthology offers a lot of music (albeit with no liner notes) for the money. I’m reminded of what I sometimes think when I buy a ridiculously big package of something at Costco for an equally ridiculous low price: even if I wind up throwing half of it away, I’ll come out ahead.

Wanderlust, All a View. This four-man band, which formed in Philadelphia in 1993, broke up only about five years later after issuing just two albums, the second of which they self-released after their label dropped them. Flash forward to 2020, when Scot Sax, an alumnus of the group, came upon a tape of some of their old acoustic demos, decided they offered the seeds for a great album, and reformed Wanderlust to record it.

The result is infectious, harmony-laden, highly accessible power pop that owes debts to psychedelia and latter-period Beatles and that occupies an improbable space somewhere between Oasis and the Jayhawks. The 10-track All a View clocks in at only 33 minutes and seems even shorter because, well, you know what they say about when time flies.

Jack Grace Band, What a Way to Spend a Night. “Eclectic to say the least” is the way one TV interviewer in Ireland described Brooklyn, New York–born Jack Grace, citing influences that include bluegrass, honky-tonk, jazz, and rock. In fact, he’s so eclectic that only those with the broadest tastes are likely to favor everything on this latest album, but he’s so talented that you’re bound to enjoy much of it.

Highlights on the CD – which makes creative use of organ, electric guitar, and a brass section and incorporates a fair amount of humor – include the uplifting “Here Comes the Breeze,” the jazzy “You’d Be Disappointed (If I Didn’t Disappoint You),” and “Chinatown,” an atmospheric, evocatively detailed tribute to one of New York’s most colorful neighborhoods. Grace is an artist who ignores musical boundaries and clearly loves to take chances, most of which pay off on What a Way to Spend a Night.

Dana Sipos, The Astral Plane. The latest album from Victoria, British Columbia–based Dana Sipos offers a subdued, introspective, and moody journey that relies on jazz-tinged folk instrumentation and the artist’s dreamy vocals, which sometimes recall Fairport Convention and their lead singer, Sandy Denny. (Sipos is also a bit redolent of Judee Sill, who as it happens sang about the astral plane on the first cut of her 1971 debut album.) The lyrics conjure up some soothing images from nature but also a fair amount of pain, such as in “Greenbelt,” a song about the artist’s childhood, and “Light Around the Body,” which concerns Sipos’s family’s experience in the Holocaust.

The Astral Plane is a somewhat demanding album but a rewarding one, as well, thanks to its thoughtful verse and richly textured music from a core band that features the singer on guitar and percussion and producer Sandro Perri on synth and percussion plus musicians who add electric guitarist, piano, organ, vibraphone, bass, and drums. A handful of tracks also incorporate a few female backup vocalists, and one features the always wonderful violinist Fats Kaplin.

Various artists, Party for Joey: A Sweet Relief Tribute to Joey Spampinato. Bassist, singer, and songwriter Joey Spampinato co-founded the influential NRBQ in the mid-sixties and stayed with the group for nearly four decades. His impact on fellow musicians is evidenced in the impressive list of those who answered the call to contribute to this tribute album, which incorporates rock, pop, rockabilly, country, and folk. It was put together by Spampinato’s wife, Kami Lyle, to raise money to help him in his battle with cancer. Among the participants in the 14-track program are Los Lobos, Keith Richards, Steve Forbert, and Bonnie Raitt (who is backed here by the current NRBQ lineup).

Spampinato wrote (or in two cases, co-wrote) the consistently excellent songs, which first appeared on various NRBQ albums with one exception: the sweet, album-closing “First Crush,” a new number that he himself sings in a duet with Lyle, who also contributes trumpet.