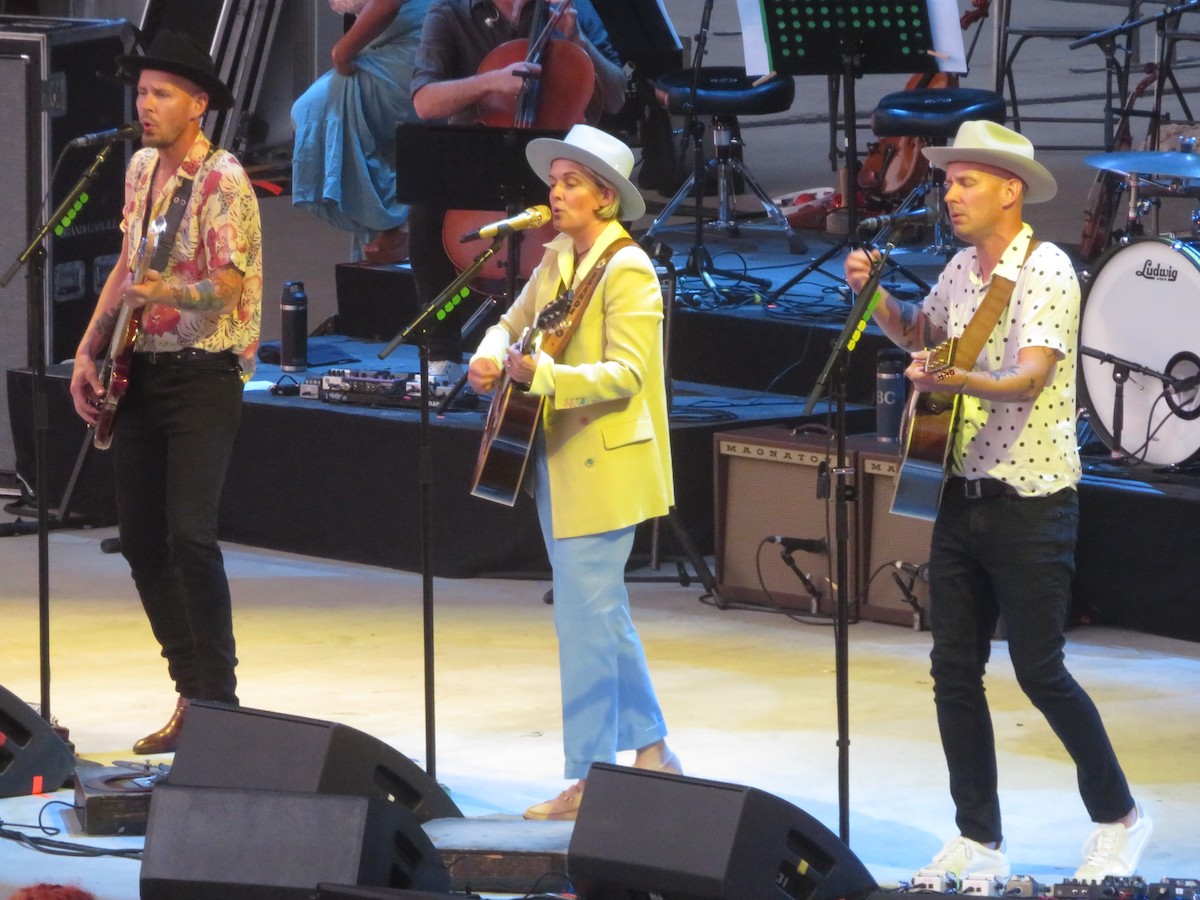 Brandi Carlile first appeared on the Forest Hills Stadium stage at 7:00 p.m., dressed in dark blue jeans, white sneakers, and a warm-up jacket. She praised her support act, Amythyst Kiah, and announced that Kiah’s band was stuck at an airport, and so Kiah was going to perform her set solo. Later, looking out into the audience that was still under the light of the setting sun, Kiah said that this was her largest-ever audience. She received a favorable response from the audience.

At 8:00 p.m. Carlile returned to the stage with her band, guitarist Tim Hanseroth, bassist Phil Hanseroth, keyboardist Shooter Jennings, drummer Chris Powell,  percussionist Jeff Haynes, cellist Josh Neumann, violinist Nikki Shorts, and viola player Kyleen King. This time Carlile was wearing light blue jeans, a button-down shirt, a yellow blazer, flat shoes, and a Panama hat – casual and ready for fun. Indeed, Carlile several times expressed her joy in performing live again. Enjoying this return to the concert stage, she remained very present to her audience in her many anecdotes and in her playing to the edge of the stage.

Perhaps mistakenly, Carlile often has been branded a country singer. Although several of her songs had a country and western flavor, her performance showed that it would be more fair to appreciate her as a pop singer-songwriter. The live interpretations of her songs served the original intention of the songwriter without the clutter of extended solos. With her vocals clear and out-front at all times, never swallowed by the instrumentalists, her lyrics were usually easy to discern. The songs were often dynamic, building to a crescendo that Carlile led with her remarkably high-soaring vocal range. These may be markings adopted by country singers, but they rule the singer-songwriter’s world.

The majesty of Carlile’s performance was her ability to feed the songs what they needed. Some songs were more acoustic, others rocked. Some songs were augmented by three-part harmony, some with a  three-piece string section, and some with additional percussion. It is possible that none of her eight accompanists played on every song. With each song given a unique arrangement, Carlile escaped the trap of any two songs sounding similar. Few artists manage to ascend to this level of diversity.

One does not have to be a connoisseur of either country or pop music to appreciate Carlile’s outstanding talent as a live performer. Well-defined sound and bright white lighting amplified the quality of her performance. Gifted with an amazing voice, a versatile skill in song-crafting, and an endearing charm, Carlile seemed to be everything any music lover could want in an open-air summer concert.

A Case of You (Joni Mitchell cover)

Hold Out Your Hand