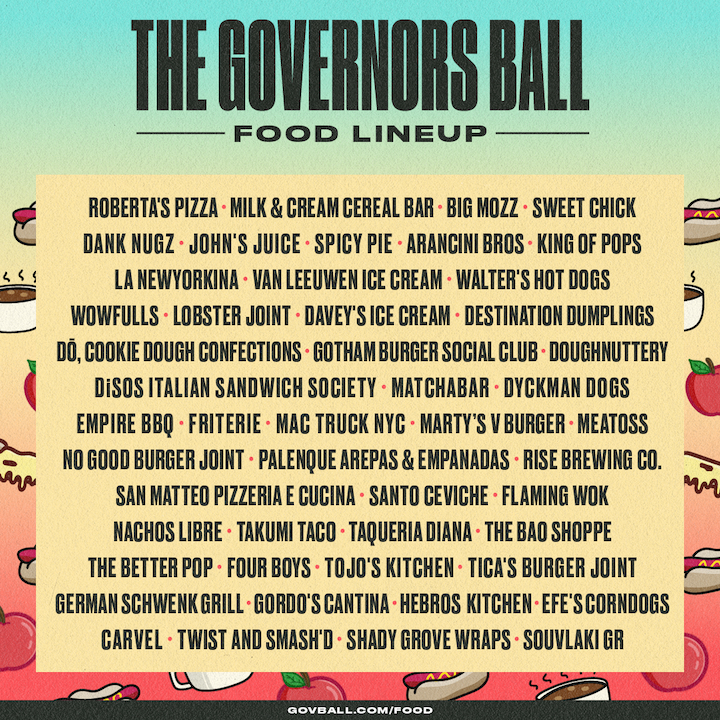 Food & Drinks Get Added To the Governors Ball Lineup

No, “food & drinks” is not the name of a hip new band. It is, as stated, the refreshments being served, promoted, and offered at the Randalls Island festival next month.

The time has finally come, concert goers and music lovers! The most important lineup of festival season has arrived!

If you’re thinking about the typical rundown that highlights the talent taking the stage (like Billie Eilish, Phoebe Bridgers, and Bleachers – who will be there!), you’re wrong. That lineup has been out for months! It is the food and beverage lineup that has finally graced our presence and is gearing us up for much more than a musical event.

Coming to Randalls Island this year for the three day weekend that is Gov Ball is everything from gourmet cookie dough (DŌ) to “Japanese-inspired Mexican food” (Takumi Taco). Where else could you find such an encyclopedic collection of cuisines then in the Big Apple?

Aptly dubbed “A Taste Of New York,” the wide array of food and drinks brought to Gov Ball 2021 reflects the melting pot of cultures, interests, and tastes found both in and out of the city. Being as this is the 10th anniversary of the festival, the organizers wanted to pay homage to the diverse city it’s in. There is no better way to do that than to put the restaurants, bars, and famed local vendors on full display.

Fresh pressed juices, unique craft beers, and even a special cocktail program are taking their own stage when it comes to beverages, too. The latter-noted program “will feature festive concoctions from BACARDÍ (bringing tropical vibes with the Gov Ball Punch), Tito’s Vodka (quenching thirst with Tito’s Sparkling Lemonade), Aperol Spritz (featuring their vibrant and bubbly namesake cocktail), Patrón (a timeless margarita on the rocks), and Jim Beam (keeping things classic with a Jim & Ginger Highball)” according to a Governors Ball press release from today, August 19.

Going back to the grub, literally, means bringing up the intriguing and soon-to-be appreciated partnership with Grubhub. Some of the NYC staples for delish dining and eccentric options that are set to present at the festival are “Roberta’s Pizza, Big Mozz, Van Leeuwen Ice Cream, The Bao Shoppe, La Newyorkina, Wowfulls, Try Vegan, and Milk & Cream.” Everyone who is anyone is going to want a taste of at leasts one of these delectable eateries specialities, though. The solution? Grubhub.

The latest press release explains: “Hungry fans can skip the lines and order some of their favorite New York bites from the comfort of the Grubhub Refuel Station. They need only take a seat, scan their table’s unique QR code to open the Grubhub app, browse the list of participating vendors, and place their order. Then they can sit back, relax, and let Grubhub bring their order directly to them!”

Everything about Governors Ball 2021 is worth experiencing – the music, the fun, the late night performances, the outfits, the ambiance, the return to live shows, the food, and the drinks.