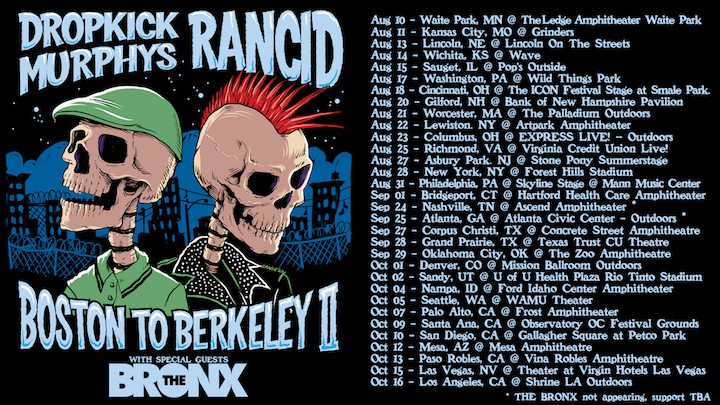 Flashing Back & Gearing Up For Dropkick Murphys’ Return

A good ‘ol Flashback Friday wouldn’t be complete with us reminiscing over some truly memorable interview moments. With our friends, Dropkick Murphys, coming around next week, it feels like the perfect time to illuminate our appreciation for the band that brought us hits like “Tessie” and “Sandlot.”

Headlining with Rancid, the world’s most cherished pseudo-Celtic punk band is taking on Asbury Park. Yes, the one-and-only Dropkick Murphys are set the grace the beloved Stone Pony Summerstage in just one week on Friday, August 27.

While there is no need for a reminder of just how personable and talented these guys are, we wanted to highlight just a handful of our favorite memories with them. From live review to intimate conversations, The Aquarian and Dropkick Murphys go way back, which is something we will always be grateful for. Now, before the group comes to our home state, let’s get on with some cherished, strategically chosen flashbacks….

Our review of Dropkick Murphys’ record, Going Out In Style:

“Whether or not you are into the Dropkick Murphys doesn’t matter, because you will find this album extremely melodic and arousing. It’s very diverse and complex, and it just seems like Going Out In Style will bring them over the top. It’s a CD created to make you feel at home whether you’re jamming out by yourself or singing along with some buddies in a bar in a glorified unity. I’m not taking anything away from what the band has done in the past but their newest album is their best yet.”

Our review of Dropkick Murphys’ musical pitstop at the Wellmont Theatre:

“Lesson learned: Don’t mess with Dropkick Murphys and their Boston pride. The seven-piece’s dedicated fans were in all their glory—moshing, dancing, raising their beers to the stage and singing along with their arms around their friends. Needless to say, Dropkick Murphys delivered the performance the crowd was hungry for.”

Matt Kelly talks how he and the band approach hitting the road and playing shows night after night:

“Music is meant to be heard in a live setting, and it’s our opinion that our gigs are meant to be audience-participatory and not a ‘spectator sport.’ The hard work is our dedication to what we do and trying to do the best we can with what we have. Everybody else has to slog away at a job they hate and hope for a promotion or accolades from their bosses.  We’re conscious of and grateful for not having that. We’re very fortunate to be in the position we are, so to do it ‘half-assed’ isn’t an option if you have an iota of scruples.”

Our review of Dropkick Murphys set at the famed NYC club, Irving Plaza:

“The set closed with a rowdy sing-along of ‘I’m Shipping Up To Boston,’ and after an audience chant of ‘Let’s go, Murphys,’ the band returned and invited audience members to climb on stage for the three encore songs, closing with a cover of Sham 69’s ‘If The Kids Are United.’ It would be hard to believe that anyone did not have a blast with Dropkick Murphys.”

“The live setting is THE way to experience the band— and I’m not talking YouTube… I’m talking about being there and singing your hearts out and enjoying yourself in the moment.”

Kelly discusses a generation-spanning fandom and what that means to him:

“[…] although you do see some of the same people coming to the gigs 20 years later —which is amazing in and of itself—we also see their kids and sometimes even grandkids coming! In addition to that, it really is amazing to have maintained an actual musical relevance with younger people. I hope it’s because they sense the honesty in what we do, and enjoy our little beat combo.”

Al Barr on comparing the band’s U.S. fanbase versus their global fanbase… at least in terms of in-person and on stage moments:

“I always think of people as being relatively the same everywhere you go, in a sense. People work for a living in general, they love their families, their children. Human beings, I think, they’re not that different.”

Barr gets real about touring life, even on the hardest of days:

“Well, I mean, the best part is the shows, getting on stage and playing for the people, bringing the new music that we are so proud of to the different places that we are going. We’re very lucky to be able to do this for a living, so it’s hard to find something to complain about. Life is relative and everybody is going to complain, I guess.

I guess the hurry up and wait is the hardest thing that we have to deal with. I think some people would find that to be a luxury compared to what they might do for a living. Again, I have a hard time defining it as being the worst thing.”

THE BOSTON TO BERKLEY TOUR II COMES TO ASBURY PARK ON AUGUST 27 AND NEW YORK ON AUGUST 28. FOR MORE DETAILS ON THE TOUR, DROPKICK MURPHYS, RANCID, AND SPECIAL SUPPORT THE BRONX, CLICK HERE!